IN AMERICA, POLITICIANS DON’T TAKE POWER — THE PEOPLE GRANT IT TO THEM,”

Electors gathered across the US 50 states and
the District of Columbia on Monday to certify
Joe Biden’s victory in the 2020 presidential
election. With the process is yet to be complete,
Biden got the support of 302 electors compared
to Trump’s 232, with no “faithless electors”
casting their vote contrary to the voters in their
respective states.

There are 270 electors needed to win.
California’s 55 electors passed Biden over the
threshold. Hawaii will cast the remaining four
electoral votes later tonight and is expected to
put Biden at 306 votes.

Once the Electoral College vote is complete,
Trump’s sole remaining gambit would be to
convince Congress not to certify the count on
January 6. Any attempt to block a state’s results,
and thus change the overall US tally, must
pass in both chambers of Congress that day.
Republicans would very likely fail to stop Biden taking office as planned on January 20 because Democrats control the House of Representatives and several Republican Senators have acknowledged Biden’s victory.
Trump has called on Republican state legislators to appoint their own electors, essentially ignoring the will of the voters. State lawmakers
have largely dismissed the idea. 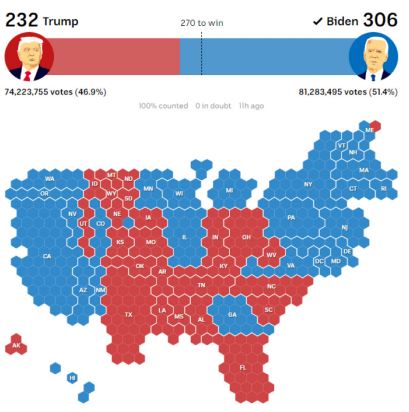