Silos that have been burning unabated for three weeks at Beirut’s partly destroyed port are increasingly likely to collapse.

Prime minister-designate Najib Mikati issued a warning that “the northern group of silos are now in danger of falling”, nearly two years since an explosion at the port killed more than 200 people.

Caretaker environment minister Nasser Yassin said there was an “increased risk” of the northern structure collapsing, because the rate at which the grain silos are tilting had increased from 2 millimetres a day to 2.5mm an hour.

The fire at the silos, severely damaged in the August 2020 blast, has been blamed on fermenting wheat stocks and the summer heat.

Efforts to tackle the blaze have been ineffective. Mr Yassin said extinguishing the blaze with water would increase already high moisture levels and ensure the fire would reignite.

The environment and health ministries released a statement saying that, if the silos collapse, dust would be emitted into the air.

“According to experts’ opinions, there is no scientific evidence for the presence of asbestos or any other toxic substances,” they said.

A 500-metre area surrounding the silos is likely to be evacuated in the event of the silos collapsing, and sites up to 1,500 metres away would be affected by dust for at least 24 hours.

Residents have been told to wear a mask and shut their windows if the silos collapse.

Mr Mikati said authorities had been unable to remove 3,000 tonnes of wheat and corn stuck in the silos because doing so might accelerate a collapse.

He told the Lebanese army to prepare for a partial collapse and warned workers and firefighters to keep a safe distance from the site.

The 2020 explosion occurred after a massive stock of ammonium nitrate, which had been sitting in storage at the port for years, caught fire.

The silos remain a sensitive topic in Lebanon. The 2020 explosion has been blamed on mismanagement and corruption, and is viewed as a symptom of the country’s many systemic problems.

In April, the Lebanese Cabinet approved the demolition of the silos after a survey found that they could collapse in the coming months.

But many, including some families of the 2020 victims, want the silos to remain as a memorial. Some believe the government is using the fire as a pretext to allow the demolition of the silos.

An investigation into the port explosion by judge Tarek Bitar has struggled to make headway amid repeated delays. Two sitting MPs in the Lebanese Parliament have been charged in connection with the investigation but have refused to attend interrogation hearings.

Meanwhile, the caretaker economy minister said Lebanon plans to build two new grain silos in a bid to tackle food security problems. Amin Salam told the Associated Press that there had been interest from some countries — particularly the UAE — and international organisations to fund the construction, which would cost $100 million.

“Building the silos will be serious crisis management, because we need the [grain[ reserves,” Mr Salam said. “All the shipments that took one week to 10 days to arrive now take up to a month. And in some cases they are being cancelled.”

Current plans would see the silos built in the port of Tripoli, Lebanon’s second-largest city, and in the eastern Bekaa Valley.

Long queues have built up at bakeries around the country amid a downturn in imports because of Russia’s invasion of Ukraine. On Tuesday, the Lebanese Parliament approved a $150 loan from the World Bank   to support wheat imports for six to nine months.

A devastating economic collapse, that first became apparent in 2019, has plunged much of the population into poverty and led to the Lebanese currency losing more than 90 per cent of its value. There are also widespread shortages of water, electricity, medicine and other basic necessities. 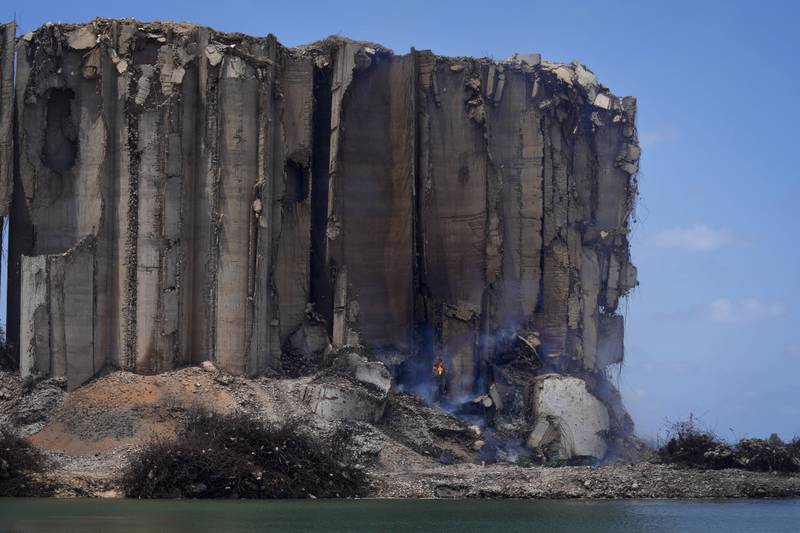