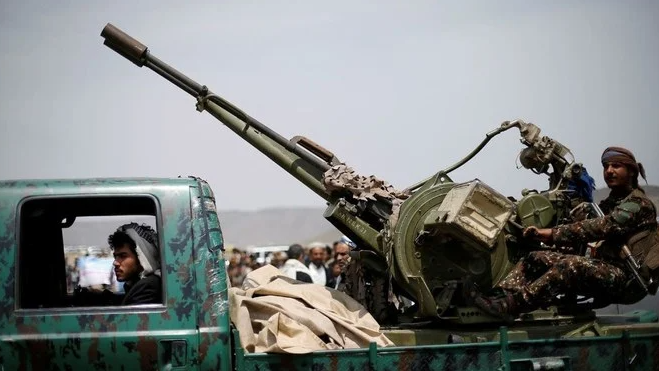 RIYADH: A ballistic missile fired by Yemen’s Houthi rebels on Saturday killed at least 14 people in a government-held city, including a 5-year-old girl.
The missile hit a gas station in the Rawdha neighborhood in the central city of Marib, according to Ali Al-Ghulisi, the provincial governor’s press secretary.
Dozens of people were wounded in the attack, he added. There was no immediate comment from the Houthis.
“The Houthi militias targeted the petrol station where dozens of cars were waiting to fill up, sparking a huge fire in which 14 civilians perished, including a little girl,” the Saba news agency said, adding that five people were wounded including a child.
The Iran-backed Houthi militia launched an offensive to capture oil and gas-rich Marib from the internationally recognized government in Yemen in February.
The offensive sparked regional and international condemnation, especially since Marib has served as a safe haven for thousands of internally displaced persons who have been fleeing the fighting since the start of the conflict in 2014.
Yemen’s Information Minister Moammar Al-Eryani strongly condemned the attack targeting the gas station, and the attack that followed a few minutes later targeting two ambulances that rushed to rescue the victims with a booby-trapped drone.

He claimed the attack resulted in the death of 17 civilians, including a girl whose body was charred, and wounded five others.
“The heinous terrorist crime is an extension of the continuous and deliberate targeting of residential neighborhoods and civilian objects in the city of Marib by the Houthi militia, with the aim of inflicting the largest number of civilians, after the failure of its military escalation, its attempts to undermine the city’s steadfastness, and the daily depletion of its elements and equipment on the various fronts of the province,” he said in a statement.
He called on the international community, and the UN and US envoys, to speak out and condemn the attack, which he said “amounts to war crimes and crimes against humanity.”
He called for re-listing the Houthi militia on the international terrorist lists, and to prosecute its leaders as war criminals.