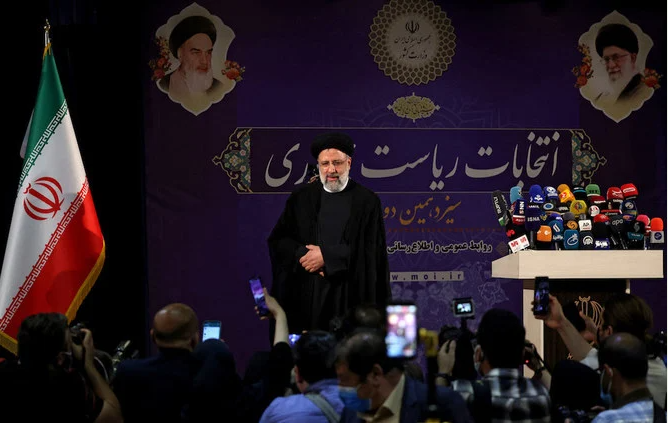 LONDON: More than three decades ago, Ebrahim Raisi made a name for himself overseeing the summary execution of thousands of Iranian political prisoners — an act considered one of Tehran’s first crimes against humanity.

Now, the religious hard-liner turned prosecutor is running for president of the Islamic Republic, and experts have warned that a flurry of disqualifications have effectively left the infamous jurist out in front in a one-horse race.

In what is set to be one of the country’s most restricted elections ever, June 18 will see Iranians go to the polls to vote for Hassan Rouhani’s replacement.

Of the nearly 600 candidates that applied to run in the election, a huge proportion of them — some 585 people — were disallowed by the GC, including such well-known political figures as former president Mahmoud Ahmadinejad and Ali Larijani, a former parliamentary speaker and Islamic Revolutionary Guards Corps (IRGC) commander.

Mirko Giordani, founder of strategic advisory group Prelia, says the unexpected disqualification of Ali Larijani — previously seen as the only viable alternative to Raisi — has reduced the presidential election to a “one-horse race” in Raisi’s favor.

“Larijani was in the conservative camp, but he’s turned more moderate in recent times. He was poised to be the only possible contestant to Raisi — and, even then, the latter was supposed to win,” Giordani told Arab News.

The lineup is now so uncompetitive that incumbent Rouhani and even Raisi himself have both appealed for a wider variety of candidates.

“Usually, Iranian elections are characterized by their strong turnout — around 70 percent — but current numbers are expected to be around 50 percent. That’s going to be a huge blow in terms of legitimacy,” Giordani said. “Even if Raisi does clinch the election, there’s going to be a lot of questions asked.”

During his time as an Islamic Republic insider, presidential favorite Raisi has overseen a catalogue of human rights abuses that have shocked Iranians, rights groups and the international community.

Among those he has condemned to death is champion wrestler Navid Afkari for his alleged role in anti-government protests. His killing in late 2020 sparked global outrage and protests from world sporting bodies — including the Olympics.

Perhaps his most heinous crime was his direct involvement in the “death commission” that ordered the execution of thousands of political prisoners in 1988. Dubbed a crime against humanity by Amnesty International, Raisi, then a deputy prosecutor for Tehran, oversaw the sham trials that condemned thousands to death.