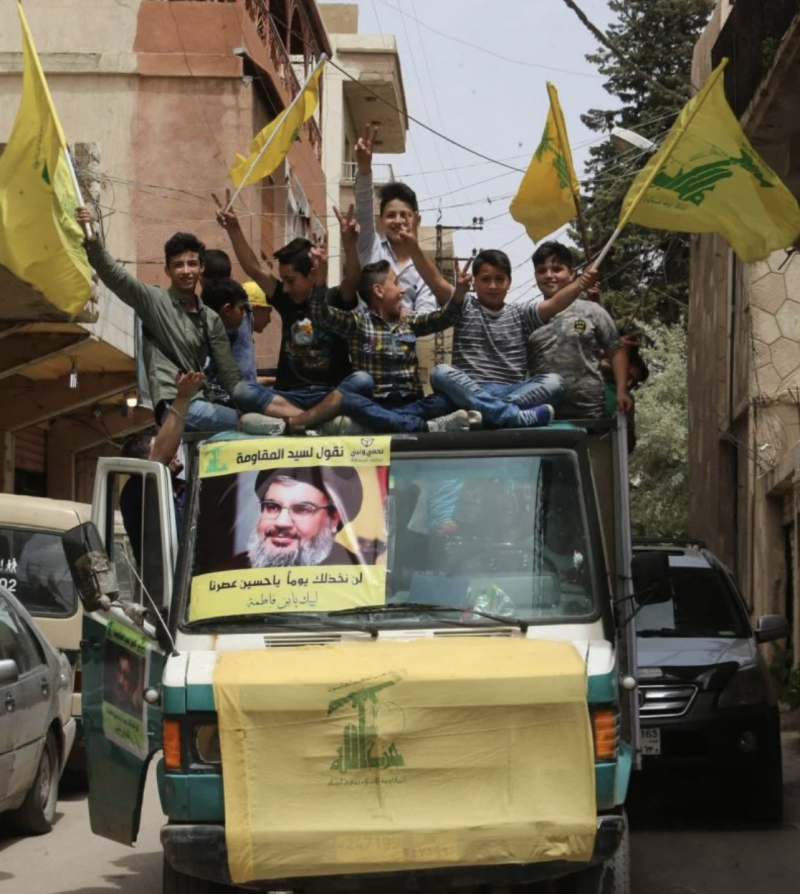 The of Baalbeck-Hermel (Bekaa III) constituency is an undisputed Hezbollah stronghold. But it is also the only district where the Shiite party faces head-on its biggest opponent on the local scene: Samir Geagea and his Lebanese Forces. Hussein Hajj Hasan, current Hezbollah MP for Baalbeck, has already set the tone: “The LF is the spearhead in the battle against the resistance,” he said on April 11.

In 2018, this party created a surprise by making an entrance in the pro-Iranian party’s stronghold, after the large victory of Antoine Habchi, who won the only Maronite seat in the constituency.

For the 2022 elections, Hezbollah’s objective is clear: to re-firmly establish itself as the undisputed master of the Bekaa III constituency, in the face of civil society and protest movement groups, and especially in the face of the LF, from whom it managed to snatch two Shiite candidates who withdrew from the race.

In addition to these withdrawals, which could multiply according to several electoral experts, threats and security incidents targeting Hezbollah’s opponents have recently been recorded in this constituency. It is a clear attempt to muzzle and discourage any dissonant voice.

Ten seats need to be filled in this constituency: six Shiite, two Sunni, one Maronite and one Greek Catholic.

Six lists are competing in what is likely to be a feverish contest. One of the other lists is the result of the alliance between Amal, Hezbollah and the Free Patriotic Movement. This list is joined by the Syrian Social Nationalist Party (SSNP, Assaad Hardan’s wing).

This list will have to compete with another one sponsored by the LF, which has reached out to Sheikh Abbas Jawhari, a Shiite dignitary known for his opposition to Hezbollah.

At the same time, there are three lists emanating from the October 2019 protest movement, including list sponsored by Charbel Nahas, head of Citizens in a State movement.

On this chessboard, there is a list sponsored by the tribes and clans whose presence is traditional in the Baalbeck-Hermel district.

As for the Sunni seats, Hezbollah and Amal won one, Walid Sukkarieh in Hermel (6,916 votes), and conceded the second to the Future Movement Bakr al-Hujeiri (5,994). As for the SSNP, it had Albert Mansour (Greek Catholic), a pro-Syria figure, elected with 5,881 votes.

Mansour refrained this year from running for re-election. It is through his seat that the FPM could make its entry into the district.

An agreement has apparently been reached with Hezbollah for the Greek Catholic seat to go to the Aounist party (which is supporting the candidacy of Samer Toum). In return, Hezbollah should get the Shiite seat of Jbeil, aiming to bring Raed Berro into parliament.

The SSNP will be represented on Hezbollah’s list by Akid Hanna Hadchiti, who is running for the Maronite seat. The pro-Iranian party has thus completed its list which does not involve any change when it comes to the Shiite figures.

Even Jamil al-Sayyed, current MP for Baalbeck, who is seen as a serious competitor to Nabih Berri for the post of Parliament speaker, managed to keep his place, at the expense of Ali Hijazi, secretary general of the Baath party.

On the other hand, all eyes are focused on the LF. In the May 2018 parliamentary elections, the political party had pulled off a masterstroke by leading Antoine Habchi to Parliament, with 14,858 preferential votes.

This victory was partly the result of the alliance forged with the Future Movement. The latter had also led its candidate, Bakr al-Hujeiri (originally from Arsal, a large Sunni village in the district), to the general assembly after securing over 5,994 votes.

In 2022, the situation seems a little more complicated for the LF, which has lost its major ally due to Saad Hariri’s decision to boycott the elections. The current strained relations with the blue party have complicated its task a little more.

LF circles close to Maarab, or Geagea’s headquarters, however, are optimistic.

“We have very good relations with the Sunni community, and things are progressing,” said Nohra Abu Younes, head of the LF electoral machine in Baalbeck. “In 2018, the Sunnis had given 15,000 votes to our list and 2,000 preferential votes to Antoine Habchi,” he stressed, and acknowledged that a likely Sunni abstention could affect the party’s score in the polls.

But concordant sources told L’Orient-Le Jour that the LF now has the support of former Prime Minister Fouad Siniora, a known opponent of Hezbollah. The former prime minister supports the candidacy of Zeidan Hujeiri, who is on the LF list.

“It is very likely that the Sunnis (who are not affiliated to the Future Movement) will vote for him, and therefore for the list that includes Antoine Habchi,” Fouad Khalil, an electoral pundit and analyst from Baalbeck, told L’Orient-Le Jour.

A setback for the LF-sponsored list is that two of the six Shiite candidates, Ramez Ahmaz, former mayor of Labweh, and Hayman Mcheik, have recently withdrawn from the race.

On the ground, Hezbollah’s supporters tried to intimidate Sheikh Abbas al-Jawhari on Monday in the middle of an election rally.

In a video that circulated on social media, the Shiite dignitary is urging voters to “vote freely” when young armed gunmen start shooting massively in the air.

“Hezbollah is trying to terrorize us because it is afraid of a Shiite breakthrough,” the sheikh told L’Orient-Le Jour. This party is aware of the change in the political trend among the Shiites, and fears it. These actions will not scare us. On the contrary, they increase our supporters,” he said.

As for civil society, its three lists had not obtained any seats in 2018, as they failed to meet the electoral threshold. This scenario risks being repeated on May 15, particularly since the protest movement’s groups have not managed to unify their ranks and and their candidates who are hostile to Hezbollah seem to be victims of intimidation and attacks. This is the case of Abbas Yaghi, a Shiite candidate on the Coalition for Change list.

According to L’Orient-Le Jour’s correspondent in the Bekaa, Sarah Abdallah, a person was injured in a dispute on Monday in the office of Yaghi, who had criticized Hezbollah’s arsenal.

– The Maronite seat: This seat, which is currently held by Antoine Habchi, seems to be at the heart of the confrontation between the LF and Hezbollah. Several experts believe that the withdrawal of Ramez Amhaz and Hayman Mcheik allegedly would have happened from a Hezbollah maneuver to weaken the LF-sponsored list, by raising the electoral threshold and reducing Habchi’s chances to be re-elected.

Amhaz, however, denies this is the case and does not share the experts’ beliefs.

“I have not been pressured in any way,” he told L’Orient-Le Jour. “I am not against Hezbollah’s arsenal, but I have remarks on its parliamentarians’ actions. So, I could not ignore the pressure placed by my family and my tribe, which defend the weapons of the party that the LF want to be disarmed,” he said. He insinuated that [Mcheik] was subject to the same family pressure. In any case, the LF believe they are in a good position.

“Hezbollah’s actions come as no surprise to us, but we are confident in Habchi’s triumph and are working to win a second seat,” Nohra Abou Younes said.

– The Sunni unknown: Sunnis make up 14 percent of the electorate in this constituency. With this in mind, what will they do after Hariri’s withdrawal from politics?

“Hezbollah is doing everything it can to raise the electoral threshold and make it a hard task for its opponents, especially the LF,” said Fouad Khalil. He recalled that Samir Geagea’s party has lost a major ally with the Future Movement’s withdrawal.

“If the Sunnis decide to abstain from voting, it will be difficult for the LF to keep their Maronite seat…All signs indicate that the Sunnis will boycott the elections,” he said. He added that in case things go the other way around at the last minute, Habchi’s re-election will be likely.