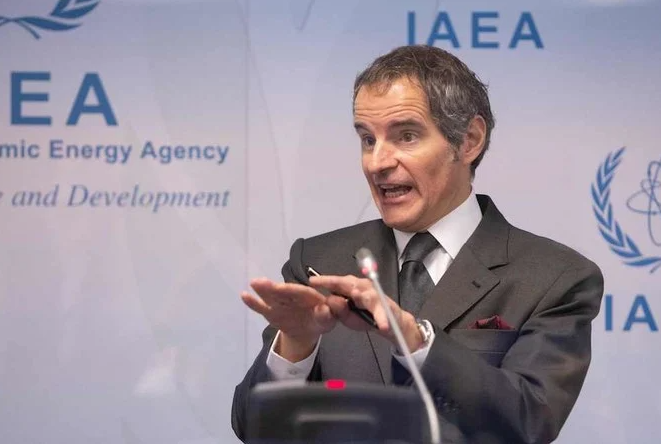 Rafael Grossi, director general of the International Atomic Energy Agency (IAEA), said Tehran’s enrichment program was “very concerning” and cautioned that it requires a “vigilant eye” in an interview published by the Financial Times on Wednesday.

“A country enriching at 60 percent is a very serious thing — only countries making bombs are reaching this level,” Grossi told the newspaper. “60 percent is almost weapons grade. Commercial enrichment is two or three (percent).”

While most measures the regime has taken to this point are easily reversible, the level of research and development that had taken place was an “issue,” Grossi said.

“You cannot put the genie back into the bottle. Once you know how to do stuff, you know, and the only way to check this is through verification,” he said.

“The Iranian program has grown, become more sophisticated so the linear return to 2015 is no longer possible. What you can do is keep their activities below the parameters of 2015.”

World powers are currently in Vienna to negotiate with Iran on a return to full compliance with the Joint Comprehensive Plan of Action (JCPOA) nuclear deal signed in 2015, which the US withdrew from in 2018.

Since the American withdrawal, Iran has consistently overstepped on limits set out in the deal. Which has prompted fears Tehran is developing a nuclear weapon, a charge it has denied.

Grossi said a return to the original JCPOA was not a “feasible” option and pointed to the need for a more nuanced agreement considering the knowledge the Iranian program had accumulated since 2015.

by the original JCPOA.

“It has happened and now the issue is how to deal with the results,” he said. “What you absolutely need is a way to verify that if they have that knowledge it is not being used to make bombs.”

Grossi also said Iran’s failure to provide explanations for traces of uranium found at two of its undeclared sites was “a big problem.”

Inspectors have been prevented from carrying out full monitoring on Iran’s program since Tehran imposed restrictions on IAEA in February, but a compromise agreement extension into June has allowed some monitoring to take place.

Grossi said the extension period was a “bridge,” but that the arrangement would ultimately be “unsustainable,” the Guardian newspaper reported.

“We are entering a phase where we have to take . . . one week at a time, and see how the other process (the Vienna negotiations) evolves,” he said. “It is obvious that a program with the degree of ambition, sophistication that Iran has, you need a very robust, very strong verification system . . . otherwise it becomes very fragile.”

Grossi said he has warned Iran about how restricting access will affect its credibility in negotiations, but that it is not his role to reprimand Tehran directly.

“They know they have to provide explanations. We are asking them to come clean with all these things because it can only help them,” he said.

“My responsibility is the credibility and integrity of the nonproliferation regime, I could say ‘do not say anything,’ but then five years down the line something happens, and then it is a dereliction of duty on our part.”

Grossi, who was in London on Tuesday, discussed challenges to the global nuclear non-proliferation regime and the need to monitor Iran’s activity with British foreign secretary Dominic Raab.

“We discussed how to ensure safe and peaceful uses of nuclear technology and prevent its misuse,” Raab said. “We also spoke about UK support for IAEA’s monitoring and verification in Iran and North Korea.”