Israel Carries Out Repair Works on Lebanon Border after Protests 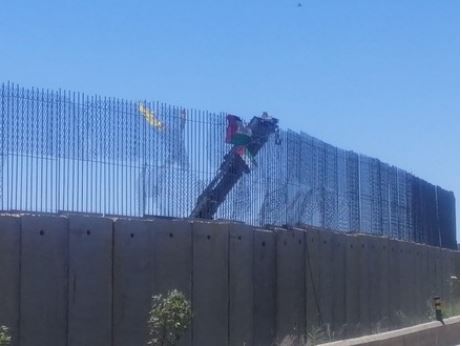 Israeli maintenance crews were on Sunday carrying out repair works on Lebanon’s border after days of skirmishes with Lebanese and Palestinian protesters.

Lebanon’s National News Agency said the Israeli crews were fixing the barbed wire and the security cameras that were smashed by protesters opposite the Lebanese town of Kfarkila.

The Israelis also removed Palestinian flags that had been erected on the barbed wire, amid a heavy deployment by the Lebanese Army and UNIFIL peacekeepers.

A Lebanese protester has been killed and several others have been injured since the demos first erupted in solidarity with the Palestinians on Friday.

On Saturday, dozens of pro-Palestinian demonstrators gathered along the southern frontier to commemorate the Nakba and denounce Israeli violence in Gaza and Jerusalem.

Brandishing flags and wearing checkered Palestinian scarves, the Palestinian and Lebanese protesters gathered at several locations including the Lebanese border towns of Maroun Al-Ras and Adaisseh.

They were surrounded by Lebanese soldiers who had erected checkpoints and blocked roads leading up to the frontier to avoid any escalation.

Lebanon’s National News Agency said Palestinian protesters had clashed with security forces blocking their way to the border in the Marjayoun area.

Protesters in the Kfarkila district near the border climbed a separation wall and hung a Hizbullah and a Palestinian flag from a watchtower. They also threw rocks at the wall as gunfire erupted from the Israeli side.

Ahead of Saturday’s protest, an Israeli army spokesperson had warned Lebanon against allowing “rioters” to approach the frontier.

His statement came as the Israeli army claimed it foiled an overnight attempt by a group of Lebanese infiltrators to cross the border near the settlement of Metulla.

Israel occupied much of southern Lebanon from its 1982 invasion until its withdrawal in 2000 following military operations spearheaded by Hizbullah.