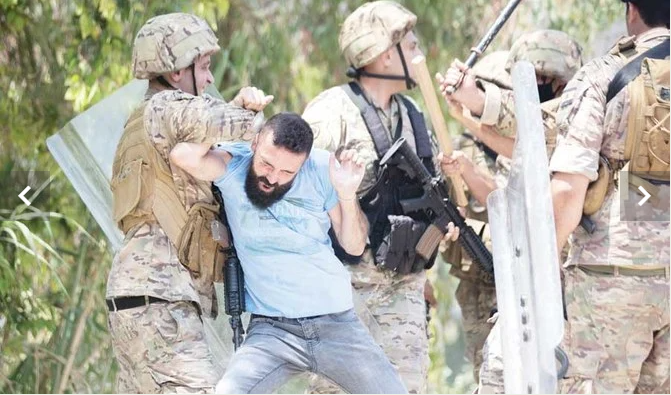 BEIRUT: Lebanese political parties have reacted strongly to a Beirut demonstration on Sunday by the Syrian Social Nationalist Party (SSNP), with the speaker of the Lebanese parliament reiterating the need for a national government on Monday.

Chants by SSNP members were “a return to the language of the civil war,” the parties said.

The demonstration, authorized by the Ministry of Interior, took place in light of a complex and deadly political stalemate.

It also came after four days of raising pictures of Syrian President Bashar Assad, with Syrian workers and refugees, who were cheering Assad, being attacked by some Lebanese citizens.

The SSNP demonstration came within the framework of the commemoration of the liberation of southern Lebanon from the Israeli occupation.

At the forefront of the celebrating parties was Hezbollah, whose supporters spread in the border areas.

Those groups waved Lebanese and Hezbollah flags, and drove their cars and motorbikes to smash an iron gate bearing an Israeli symbol before travelling to the town of Naqoura.

The speaker of the Lebanese parliament, Nabih Berri, warned on Monday that “creating crises on purpose, if it continues without a quick initiative to address them, will topple Lebanon.”

Berri called on “the loyalists and the opposition to feel the danger of the fateful stage.”

He urged political forces and NGOs “to liberate Lebanon from the complex of choosing personal interests over the interests of the homeland by some people, and recognize that our governmental problem is 100 percent internal.”

Berri said: “The only solution is to form a national government, without preconditions, with non-partisan competencies, no obstructing third for anyone, according to the French initiative, and its only program of action should be to restore the confidence of the Lebanese and the Arab brothers in Lebanon.”

Political activist Naufal Daou told Arab News that “what is happening in Lebanon is just smoke bombs to divert attention from the main problem, which is the Syrian and Iranian occupation of Lebanon.”

He clarified that “all that happened in recent days is an attempt to cover up the basis of the problem and to distract people.”

He added: “As long as we do not acknowledge the main problem, which is related to the wrong regional and international positioning of Lebanon, and as long as we remain as part of the Syrian-Iranian system, there are no solutions and no one is ready to help us.

“The international community is telling us to reform and fight corruption. This is your business.

“But when we say to the international community that we are occupied by Iran, the issue of Lebanon becomes the focus of foreign treatments.”

The SSNP demonstration soon evolved into a military parade without weapons.

Party members covered their faces with masks and wore black and khaki colors.

Video footage circulated on social media of groups participating in the demonstration shouting chants against the leader of the Lebanese Forces (LF), Samir Geagea, threatening to kill him in the same way former President Bashir Gemayel was killed in 1982.

The Judicial Council issued a death sentence against Habib Al-Shartouni, a member of the SSNP, for the murder of Gemayel.

The LF said in a statement that “the chant that was used at the demonstration was a clear admission of killing and an explicit call to kill.”

The LF announced that it would file a case before the competent authorities “against those responsible for the celebration.”

The leader of the Free Patriotic Movement, MP Gebran Bassil, joined the denouncers.

Bassil said that “every call to kill is reprehensible, and it is a return to the language of war that is rejected because fueling instincts undermines the principle of the state.”

Bassil added: “We reject the return to militia behavior, and there is no place to justify it. As for respecting the martyrs, especially the president of the republic, it is a duty, and we all have martyrs.”

The head of the LF’s foreign affairs department, Richard Kouyoumjian, warned that no one can bring back Syrian tutelage to Lebanon.

He called for “every displaced Syrian who has chanted in support of Assad to return to Syria because we cannot continue as a lawless country.”

The Future Movement MP Rola Al-Tabash denounced “the paramilitary parades in Beirut, the closure of roads and intimidation of citizens, insults and confessions of assassinations and threats to commit others.”

MP Nadim Gemayel, the son of the former president, said: “Bashir, after 40 years, still terrifies them.”

The Progressive Socialist Party said that “civil peace and respect for its requirements is one of the most prominent pillars of the Taif Accord, which ended the civil war and laid the basis of national reconciliation that must be adhered to above all considerations, hoping that those concerned realize the urgent necessity to achieve a government settlement before it is too late.”

The Lebanese “are experiencing unbearable daily oppression,” the party added.

The media office of Interior Minister Mohammed Fahmy referred to a split within the SSNP.

It said: “Some members of the party obtained a license from the ministry to hold a ceremonial gathering and pledged to abide by the conditions of the ministry. Others within the party objected to the request on the grounds that the license applicants do not represent the party.”

Fahmy’s office added that “the ministry does not interfere in disputes within parties.”