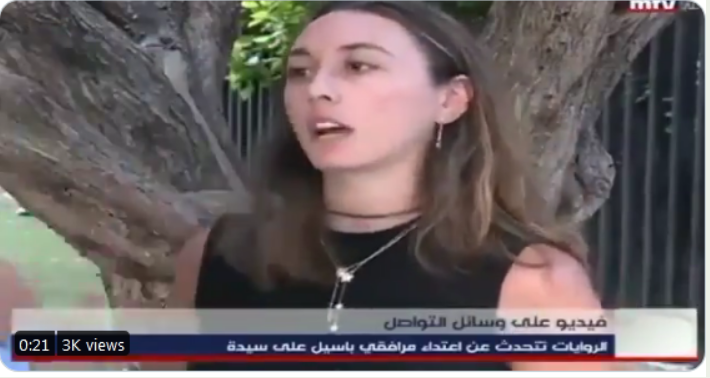 BEIRUT: A video of a brawl between a Lebanese woman and Head of Free Patriotic Movement Gebran Bassil’s bodyguards after she publicly told him ‘shame on you’ went viral on Sunday.

The woman was having lunch with friends in a newly-opened restaurant at Al Batroun, the birthplace of Bassil, Lebanese President’s son-in-law and a strong political ally of Iran-backed party Hezbollah, when the altercation happened.

Once the woman, identified by media as Yasmine Al-Masri, saw Bassil at the restaurant she yelled at him saying the Arabic for “shame on you.”

She is believed to have been provoked by his audacity showing up in public as if he is not one of the major instigators and those responsible for the country’s political deadlock, economic collapse and corruption.

It was reported in different media outlets that Bassil’s entourage instantly rushed toward Al-Masri, whacked her brutally and pinned her down to the floor. Meanwhile as the bodyguards were violently silencing and preventing her from shouting, Bassil made his way hurriedly to his car.

Arab News contacted the restaurant where the incident happened.

“The incident happened around lunchtime. She yelled at lawmaker Bassil and told him what means ‘shame on you’ for what you’ve been doing to the people… she reacted like any other independent citizen would do as to how dare he provocatively show his face in public,” a waiter told Arab News. He declined to give his name due to the sensitivity of the issue and fear of losing his job.

In the video that Al-Masri recorded using her mobile phone, the footage showed the entourage escorting Bassil to his waiting car while her voice could be heard heatedly arguing with one of the bodyguards who walked toward her and battered her hand. The video footage was clearly flipped upside down after Al-Masri was attacked by the bodyguard and her phone got broken.

Revealing what happened, Al-Masri told MTV channel she yelled at Bassil once he entered the restaurant by telling him ‘tfeh 3lek’ [shame on you] maintaining that it is not a curse. “That is the least I could tell him. His bodyguard told me to keep my mouth shut and assaulted me. I stood up after I fell down due to the assault, grabbed my phone and followed the entourage wanting to film what they did,” she told the MTV stressing that her friend called others for help because she was brutally attacked.

Bassil’s media office claimed that he and his family were about to ride their car when a woman used foul language against him.

His entourage responded ‘naturally, peacefully and modernly’ to stop her from cursing, according to the media statement that confirmed the woman wasn’t beaten.

Bassil told Free Patriotic Movement supporters and members that ‘the era of leaving swearwords unanswered is over’ and to respond accordingly.

In response to that, popular TV host Ghada Eid tweeted saying ‘the era of leaving corruption unfought is over’.

Mariana tweeted ‘By showing violent behavior, bullies try to hide their own weakness.’

Another used tweeted about Bassil saying ‘Small Man with a Giant Ego’.

Samer Al Khoury tweeted ‘so lovely how you [Bassil] always trend when it’s an insult or corruption what a disgrace you are’.

International Lebanese artist Elissa said on twitter ‘every hand that beats a woman should be broken’.