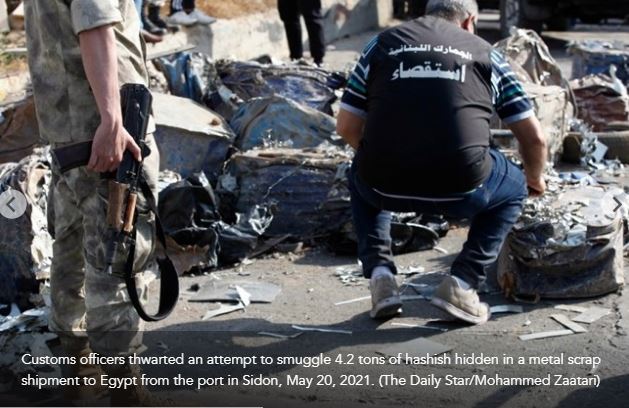 SIDON, Lebanon: Customs officers thwarted Thursday an attempt to smuggle at least 4.2 tons of hashish hidden in a metal scrap shipment to Egypt from a port in south Lebanon.

Customs officials said the hashish was “professionally concealed” inside 140 sealed metal barrels, about 30 kg in each barrel, among loads of scrap metal brought from the Bekaa Valley.

It was transported to Sidon on trucks intended for external transport, and the smuggled hashish was discovered after part of the cargo was loaded on a ship named “Soldier Cesar.” The rest of the cargo will be unloaded Friday under the supervision of the judiciary and checked for further quantities of smuggled marijuana.

According to security sources, the shipping agent for the cargo, one of the workers at the port and five of the truck drivers who transported it as well as their assistants have so far been arrested.

The head of the Sidon Port Investment Authority, Raef Fawaz, said: “It is a new spot of light that the customs police registered in the port of Sidon in cooperation with security forces from the Army and General Security intelligence. “

Fawaz pointed out that there was no scanner at the port of Sidon and said, “We are working to secure electricity, water and surveillance cameras to control all gaps at the port.”