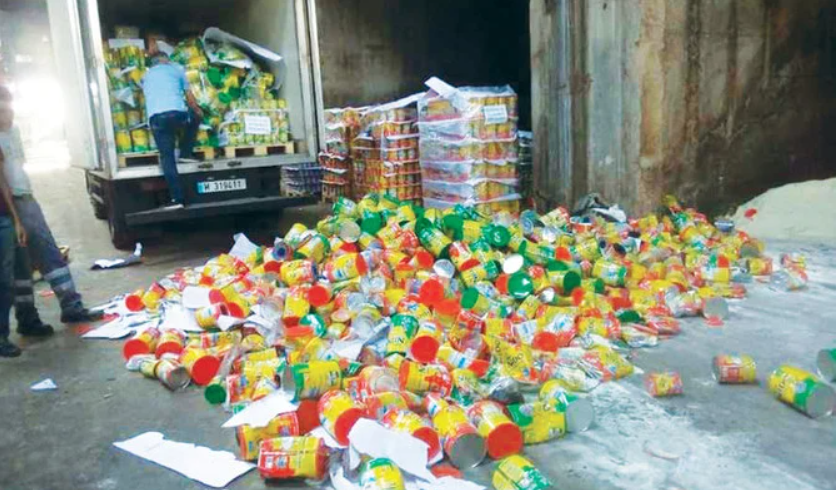 BEIRUT: Lebanon has been running short of infant baby formula for months as the country has been dealing with a severe economic crisis. A video showing the disposal of 20 tons of the baby milk substitute has been circulating on social media and has only added to the public’s frustrations.
The Discriminatory Public Prosecution has commissioned the information department from the Internal Security Forces (ISF) to investigate as infant baby formula — which is supposed to be subsidized — has been missing from shops and pharmacies for weeks.
“There is a kind of social solidarity and government policy to control prices in the time of crises in the world, however, when there is a shortage of infant formula in the Lebanese market, it is not permitted to see it destroyed in front of our very own eyes,” activist Mahmoud Fakih told Arab News.
“Why did the state not prosecute the traders who monopolized and hid this milk? It seems that people are the last thing on the mind of traders who insist on continuing to make profits in dollars.”
The infant milk formula shortage is just one part of a food security problem brought on by economic collapse and worsened by Lebanon’s reliance on imports for basic necessities. Staggering inflation has impeded imports and slashed purchasing power.
The video surfaced on social media after Hani Bohsali, president of the Syndicate of Importers of Foodstuffs, Consumer Products, and Drinks, said “subsidies have been lifted on infant formula for ages one to three years old.”
The Lebanese government is avoiding lifting subsidies on items, fearing the resentful reactions and leaving the matter into the hands of the Banque Du Liban (BDL), which settles for the cessation of payments to importers on the basis of a lack of funds in dollars.
In defense of the infant baby formula disposal, the Council for Development and Reconstruction (CDR) said: “It was requested to destroy these items in 2019 and 2020 in waste treatment facilities run by the CDR, in preparation for burying the waste in the sanitary landfill. This procedure is adopted for all the goods required to be damaged by their owners or by the competent official authorities.”

The company responsible for distributing food items in Lebanon said in a statement: “These expired products were withdrawn from the market three months before their expiry date in order to be disposed of and were in compliance with the protocols and expiry dates. Most of these products date back to 2018, 2019, and early 2020, and the process to obtain an agreement to destroy them required more than a year because of the total lockdown due to the coronavirus pandemic.”
Bohsali pointed his finger at the BDL.
“The files of the infant formula for ages one to three years old, which is included in the subsidized items, have been withdrawn from BDL,” he said.
“The goods will be delivered to the markets at an unsubsidized rate. As for the price of milk for ages below one year old, it is subsidized, similarly to medicine, and traders cannot set its price.”
Lebanese President Michel Aoun weighed in and called on the relevant agencies and departments to “strictly pursue monopolists and exploiters of the current circumstances who increase the prices and make illegal profits.”
According to his media office, Aoun added that “procedures were taken to address the fuel, medicine, medical supplies, and infant formula’s crisis.”
A joint report issued by the International Labour Organization and UNICEF in May warned that “canceling the only remaining form of social support funded by the Lebanese state will lead to a significant deterioration in the living standards of the poor and the middle class, if no comprehensive, sufficient and permanent social protection guarantees are implemented.”
In a previous statement, UNICEF warned: “the poorest families might face levels of deprivation we have not witnessed for many years.”
It is a critical time for the most vulnerable Lebanese citizens, said UNICEF Lebanon Representative Yukie Mokuo.
“If gaps are not quickly filled through strong long-term social assistance programs and at a time when most Lebanese face very difficult circumstances, those who are suffering from specific vulnerabilities will be simply left without support,” she said.
According to the video on social media, the infant baby formula disposal took place Tuesday morning. It provided even more ammunition for civil-society organizations, which held a protest march through the heart of Beirut on Tuesday afternoon.
The General Labor Union is scheduled to go on strike on Thursday to demand the formation of a new government. More labor unions continue to announce plans of joining the strike, including a syndicate of bank employees.
While waiting for a new government to rescue the country, there has been a renewed scene of cars queuing up near gas stations. Aggressive confrontations have occurred between drivers waiting in lines and desperate for gas.
Georges Fayyad, who heads the Association of Petroleum Importing Companies in Lebanon, expects the price of gasoline to increase if subsidies are completely lifted.
“Fuel-importing companies distributed millions of gasoline in the market on Monday and Tuesday, however, this is a temporary solution that will only last for 15 days,” Fayyad said.
“The decision to lift subsidies is not controlled by BDL, which clearly stated that it does not have any money. The decision should be made by the government.”