Lebanon is bleeding, its children left to die 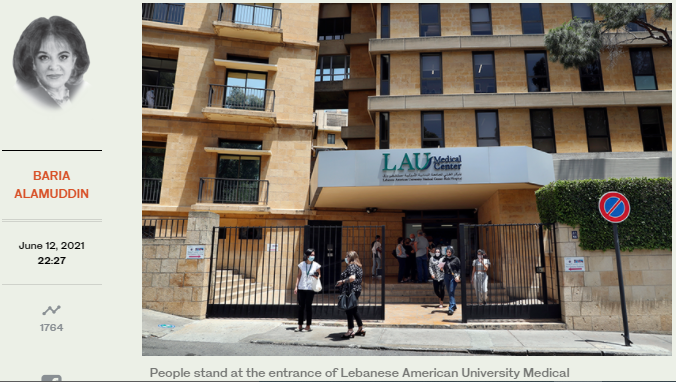 Four-year-old Mila Moussa had been receiving chemotherapy for leukaemia and already had a dangerously weakened immune system when she fell ill.

The desperate family and doctors phoned dozens of hospitals, but received the same answer: No beds were available.

When they eventually found an available bed, it was too late. Mila died in the back of a car on the journey there. Her devastated mother had a stark message to the politicians who wrecked Lebanon’s once-world-beating health system: “Your consciences are dead, God damn you!”

Hospitals warn that chronic medical shortages will force them to halt elementary lifesaving procedures such as kidney dialysis: “We have to call a million pharmacies just to find one or two needles,” said one dialysis physician.

Hospitals are canceling operations. Laboratories are running out of testing kits.

Pharmacies last week closed in protest at the shortage of many medications.

With anaesthetic running out, will patients requiring removal of an appendix or damaged limb be offered the operation without pain relief?

One specialist described such unnecessary shortages as “a crime against humanity.” In their determination to cling to power, and protect privileges and sources of wealth, politicians have abandoned Lebanon’s children — already weakened by hunger and poverty — leaving them to die in crumbling hospitals that are empty of equipment and medicines.

The direct cause of shortages is the central bank’s foreign currency reserves drying up. Long queues have been forming outside petrol stations, with fights breaking out over a couple of liters of gasoline. As Druze leader and MP Walid Jumblatt wryly observed: Failed states such as Sudan and Somalia are in a better situation than Lebanon today.

Why is Nasrallah so desperate to sell out Lebanon’s heart and soul to Tehran? With all respect to the glories of Persian culture, Arab Lebanon’s traditions, society and language have nothing to do with Iran. Yet cast an eye over Hezbollah-owned Al-Manar TV, where all participants fall over themselves trying to dress, act and speak like Iranians. Nasrallah is exploiting the crisis to divest the Lebanese of their sovereignty and identity, rendering Lebanon a subservient Iranian satellite state.

Twenty liters of subsidized Lebanese petrol, instead of being sold for around $3, can be bought for $7-$13 across the border. Hence, when Nasrallah talks about importing petrol from Iran, this is not only a problem that he helped create but also a ruse for scamming Lebanon twice over: Taking a cut on the profits from importing discounted Iranian oil, then reaping the profits from smuggling fuel into Syria, while scamming funds from the state purse in the form of unaffordable subsidies. By setting up Iran-supplied parallel pharmacies, grocery stores, gas stations and banks, Hezbollah is shamelessly profiteering from Lebanon’s demise.

Lebanon is grinding to a halt. It was warned last week that Beirut’s port was at risk of “paralysis” because much of its essential equipment, including loading cranes, has become inoperable.

This would leave Lebanon unable to import crucial supplies, even if it could afford to pay for them — a disaster for export businesses and traders, though many such companies have long ceased functioning.

How are Lebanon’s disgusting political classes competing to win votes ahead of elections? By morbidly bribing grassroots supporters with coronavirus vaccinations.

MP Elias Bou Saab, from President Michel Aoun’s Free Patriotic Movement, rented out a private hospital and offered to distribute 20,000 vaccine doses, and numerous other deputies are touting similar tactics. Politicians once corruptly bought support by bestowing all manner of gifts and career opportunities on supporters. Now, through such ghoulish “vaccines for votes” schemes, voters are expected to be grateful simply because they haven’t yet died.

When Nasrallah rejects early elections “whatever the circumstances,” what is he scared of? Does he fear that no matter how much he bribes Hezbollah’s core communities, voters will shun him in ever-greater numbers? Does he fear that his ally Aoun will be wiped out following the spectacular collapse in Christian and national support?

I spoke last week to my friend Dalia Salaam Rishani, the publisher who is joining other national figures in spearheading a “Towards One Nation” initiative, putting together a nationwide list of independent representatives to take part in elections, “change the face of Parliament” and transform Lebanon from within. This refreshing initiative will allow Lebanon to start afresh, putting the country’s people and identity first, while boasting the technocratic capabilities to reconnect Lebanon into the global system.

When Lebanese friends express frustration that the investigation into last year’s port explosion hasn’t been allowed to run its course, I chuckle. How could such a commission fulfil its mandate with anything short of rounding up Lebanon’s entire political class from the past 40 years and locking them all up? All are complicit in a system that has always serviced itself and abandoned its citizens. Lebanon’s only hope is in elections where the nation with one voice rejects all these criminals.

Justice matters. The whole system of justice implodes when political, business and paramilitary elites are too powerful — and too feared — to be held to account. Hence it is a scandal that the Rafik Al-Hariri tribunal could be closed down, after all the resources poured into the inquiry. If Hezbollah can routinely get away with murder, no citizen can sleep safely.

Sometimes a damaged limb is so diseased that the only option to save the life of the patient is amputation.

Lebanon today is in critical need of such drastic lifesaving surgery — with or without anaesthetic.

• Baria Alamuddin is an award-winning journalist and broadcaster in the Middle East and the UK. She is editor of the Media Services Syndicate and has interviewed numerous heads of state.