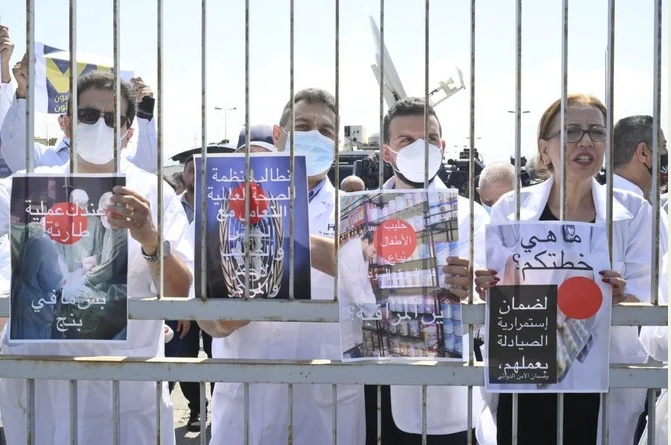 BEIRUT: Pharmacies in Lebanon shut their doors on Friday to protest severe supply shortages amid the country’s worst economic and financial crisis for decades.

The two-day strike, called over a lack of medicine, gasoline and even infant formula, is the latest sign of Lebanon’s meltdown.

Pharmacists, doctors, dentists, nurses and lab scientists took to the streets on Friday to voice their suffering, with people storming the Health Ministry’s interior courtyard and calling for rationalizing subsidies on medicine and a solution to the crisis in the healthcare sector.

The strike has caused panic in hospitals, which are suffering from medical supply shortages.

Fights have been reported between patients and medical staff, with some incidents filmed and posted on social media.

People have even been seen destroying the exterior of emergency departments, while doctors have clashed with patients who refused to postpone their surgeries due to the shortages.

Dr. Hadi Mrad blasted the “ongoing corruption of the ruling class” that had violated people’s rights and remained “unpunished, supported and protected” by a corrupt system.

“We have never seen something similar,” he told Arab News.

“We cannot help our patients. We prescribe them medicine, but the pharmacies are empty. We ask them to run a blood test, but laboratories are not receiving patients due to the shortages in subsidized supplies. We want to admit them, but hospitals have run out of IVs. We get that there is no fuel or flour. But what did patients do to deserve this? What is currently happening is intentional and the authority is determined to kill its citizens.”

He also dismissed the raids by Health Minister Hamad Hassan to inspect the stocks of medical supply warehouses as nothing but a “media charade.”

“He only designates warehouses owned by simple people, who are not supported by the authority or the politicians, to be inspected. This does not even fall within his responsibilities. Where are the health inspections and legal proceedings? The minister’s work is in vain.”

When asked whether that was an introduction to lift subsidies on drugs, Mrad replied: “We are in the middle of it. Import companies are refusing to deliver drugs as the central bank has still not paid off invoices that are nine months old. Therefore, drugs will be sold according to the dollar exchange rate on the black market. We are only living on the ruins of subsidized drugs.”

There are scenes of unrest across the country.

Protests over the economic situation and the lengthy waits at gas stations have returned to Beirut and the roads leading to the Bekaa Valley and Tripoli.

At a gas station in Tarik Jdideh, there was a fight over who had priority on filling their car. Shots were fired in the air.

In Corniche Al-Mazraa, riot police had to intervene to reopen a road that people had closed.

George Brax, a spokesperson for the gas station owners’ syndicate, tried to reassure the public that gasoline and diesel were not about to run out “for now.”

He urged people “not to humiliate themselves” at gas stations as products were available in importers’ tanks and would meet Lebanon’s needs for the next two weeks.

“In the coming days, several ships will arrive in Lebanon,” he added.

On Thursday night, the central bank said a 10 percent increase was recorded in the quantities of gasoline, diesel and household gas imported in 2021, compared with the same period in 2019.

“There are currently 66 million liters of gasoline in importers’ tanks and 109 million liters of diesel in addition to the quantities available at distribution stations, which is enough to meet Lebanon’s needs for the next 10 or 14 days. Authorizations will be issued for banks to open lines of credit to import fuel, provided they do not mess with mandatory recruitments.”

It urged officials to take the “necessary measures as this is not the bank’s responsibility” and criticized “a fuel-importing company that received the approval more than two months ago to import two shipments worth $28 million of fuel and oil, that have still not been unloaded.”