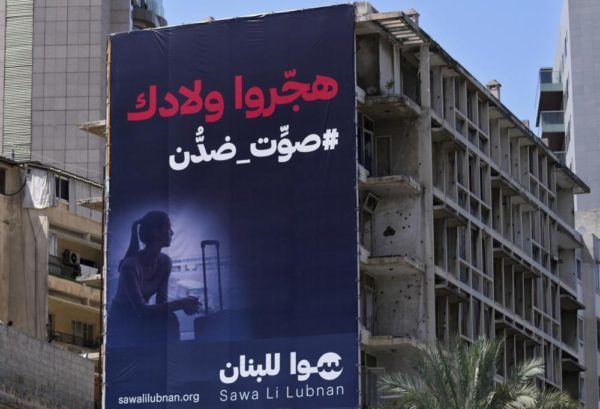 SIDON, Lebanon (AP) — Running for parliament for the first time, independent Hania Zaatari walks down the meandering alleyways of the old souk in the port city of Sidon, telling impoverished workers and traders that fixing Lebanon’s devastating economic crisis is her top priority.

“The economic plan needs to consider marginalized people like you and give them a chance for revival,” she said to 70-year-old Ahmed Abu Dhahr, one of two carpenters remaining on a street that just two years ago boasted roughly 50.

The engineer-turned-candidate exuded confidence and hope. Yet her enthusiasm was met by shrugs and resignation, reflecting widespread fears that the mid-May vote will only perpetuate the grim status quo.

With Lebanon in free-fall for more than two years, it should be a make-or-break vote for the country’s ruling class. Their decades-long grip on power has driven one of the Middle East’s most spirited countries to ruin.

The May 15 elections for parliament are the first since Lebanon’s economic meltdown began in late 2019. The government’s factions have done virtually nothing to address the collapse, leaving Lebanese to fend for themselves as they plunge into poverty, without electricity, medicine, garbage collection or any other semblance of normal life.

These are also the first elections since the August 4, 2020, catastrophic explosion at Beirut port that killed more than 215 people and wrecked large parts of the city. The destruction sparked widespread outrage at the traditional parties’ endemic corruption and mismanagement.

A new generation of political opposition activists, like Zaatari, emerged after mass waves of protests that began in October 2019, a historic moment when Lebanese temporarily dropped their confessional identities and chanted shoulder-to-shoulder for the toppling of the ruling elite.

Many are dreading the prospective outcome.

Lebanon’s rulers, many of them warlords and militia holdovers from the days of the 1975-90 civil war, have proven extremely resilient.

They hang on to their seats from one election to the next and can behave with impunity in power, largely because the sectarian power-sharing system and an antiquated electoral law virtually guarantee their spots in parliament.

The activists are trying to build off that political engagement and awareness in Lebanon to enact change.

Yet instead of uniting, self-declared opposition groups are divided along ideological lines on virtually every issue, including over how to revive the economy.

As a result, there are an average of at least three different opposition lists in each of the 15 electoral districts, a 20% increase from the 2018 elections. A total of 103 lists with 1,044 candidates are vying for the 128-seat legislature, which is equally divided between Christians and Muslims.

Their parties can rally followers who remain fiercely loyal for sectarian or ideological reasons despite outrage over the state of the country. The economic crisis has only made people more dependent on the patronage and cash that parties hand out.

For many, the elections are an exercise in futility.

“I am extremely disappointed and to be honest this is the last card before immigrating from Lebanon,” said Carmen Geha, an associate professor of political studies at the American University of Beirut. She said she was moving to Spain in the summer and that she no longer felt safe in the country.

“It is unacceptable that they wasted the momentum that was on the streets and the suffering that people have,” she said. In the past two years, over 250,000 people have left the country of nearly 7 million.

In the lead-up to the vote, streets have been festooned with giant billboards and posters of candidates with improbable promises of change. It’s a jarring sign of the money being spent on campaigns as the currency continues to slide and inflation, poverty and hunger grow.

Even the mainstream factions have tried to use anger over the port explosion for gain in the election, claiming to be on the side of reform. The Christian Lebanese Forces party has put out campaign messages insisting it pushed for better oversight at the port before the blast.

The explosion was caused by hundreds of tons of ammonium nitrate haphazardly stored at a port warehouse. The ruling class united to block the investigation into the blast. Nevertheless, the militant Hezbollah group, which dominates the political landscape and the government, touts in its campaign messages that it wants an investigation.

In an act of blatant defiance, two former ministers wanted for questioning on criminal negligence in connection to the port explosion are running in the elections. The two, Ali Hassan Khalil and Ghazi Zeaiter, belong to the Hezbollah-allied Shiite Amal party.

Naggar, director of the newly formed political advocacy group Kulluna Irada, said the election was a historic opportunity but expressed frustration at the opposition’s failure to unite.

“We don’t have the luxury to think of right and left and center and socialism or liberalism, we are in a state of survival. It is either we survive or we leave,” he said.

In the northern city of Jounieh, candidate Jad Ghosn, a journalist who recently decided to run for elections with the leftist group Citizens in a State, said the divisions have been obvious from the start.

“We have 300 political groups claiming to be of the opposition and of the revolution, and we don’t have any structure for having a discussion or of trying to coordinate between all of these opposition groups.”

Ghosn is running on a list in the Metn district with the youngest candidate, 25-year-old Verena al-Amil and three others.

Outside a Starbucks, al-Amil approached a man who said he was voting for the Lebanon Forces, one of the main traditional Christian parties. He said he was open to change, but he had not heard of many other parties.

Minutes before, a group of teenagers swarmed flashing hand gestures referring to another Christian party, founded by President Michel Aoun, which is politically allied with Hezbollah. It was a potent sign of the mainstream parties’ power over constituents.

The new independent lists are “non-sectarian so they lack communitarian support, which is the dominant discourse in Lebanese politics,” said Imad Salameh, a professor of political science at the Lebanese American University.

“If the groups had been well-financed, or backed by foreign powers like traditional parties, they might have had a better chance.”