Inside an unassuming Beirut home, three people are deep into planning a daring heist.  Surrounded by notes in the starkly-lit living room as the sky darkens outside, a woman recounts the results of a reconnasiance mission. The group have their nerves under control, despite discussing worst case scenarios.

“We all know that this could lead to our death, but we are ready for that,” the heist leader says.

The next day, at around 11am, a Lebanese lawyer and three civilians forced their way into the Credit Libanais bank in Hazmieh, armed with Molotov cocktails and a pistol.

What did they want? To withdraw their own money.

In any other nation, this act would have galvanised people against the assailants. But this is Lebanon, where, frustrated with their inability to withdraw their own money from banks since 2019, a number of depositors have been taking similar action.

The November 2 heist was different from the solo affairs that have littered the year so far. It was the first heist co-ordinated with three separate depositors and announced in advance at a public meeting days before the operation.

The foursome had spent weeks of preparation staking out different bank branches, sharing intelligence and planning which roles they would play on the day.

The instigator was lawyer Rami Ollaik,  a self-proclaimed vigilante who says he is ready to fight injustice in Lebanon.

The head of the “United Alliance Against Corruption” group fighting for depositors’ rights, he co-ordinated the hold-up while negotiating with the bank and Lebanese police.

With a gun in his right hand and a Molotov cocktail in the other, Ali Sahli, one of the robbers, took care of crowd control. He kept shouting: “I’m not a thief; I’m doing this for my son’s education.”

The depositors demanded their money and made it clear they were willing to use force.

“I don’t have anything to lose!” screamed Mr Sahli. “I will burn this place down if you guys try something.”

Catherine Al Ali carried a Taser and a Molotov cocktail. She was responsible for collecting the moneyand ensuring payments were registered properly with the bank manager. This point was important as they didn’t steal the money, but withdrew it from their own frozen bank accounts. She agreed to help Mr Sahli and Ibrahim Beydoun, the fourth robber, on the condition that they would help her when she was ready to raid her own bank.

Mr Beydoun, a wheelchair user, held a single Molotov cocktail and a lighter while collecting the money Ms Al Ali counted. He conducted an occasional lap around the bank to ensure everything was under control.

Bank heist or death from poverty

Since 2019, Lebanon has been struggling with a continuing economic crisis that locked the money of many depositors money in the banks. The government couldn’t pay any of its debts, forcing the banks to lock accounts. The central bank then issued a law that forced the banks to pay 800 dollars a month to its depositors, 400 in fresh US dollars, 200 in Lebanese pounds at the rate of 8,000 lira per dollar, and 200 at the same rate in debit cards to be used at supermarkets.

As the Lebanese lira rate dropped, so has the standard of living in most households. People couldn’t access their bank accounts and failed to secure liveable wages unless paid in US dollars.

This caused many families like the Beydouns to look for alternative ways to pay the bills.

“Those savings were meant for my wife and me to enjoy our retirement, not to be a burden on our kids, who are also struggling because of the economic crisis,” Mr Beydoun told The National.

Like most families in their village, the Beydouns sold many of their possessions, like gold and property, to survive. But, as Mr Beydoun’s son, Khalil, says: “It’s hard to ask your mum to sell her gold pieces since they are a gift of marriage from my dad and mean a lot to Arab women.”

Mr Beydoun has worked all his life as a calligraphy artist in Saudi Arabia, from where he would send large chunks of his earnings to Lebanon to keep safe in a bank. This was the case with many Lebanese families as the banks used to offer high-interest rates to their depositors, up to 9 per cent in some cases.

Mr Ollaik spent months exploring legal avenues to withdraw his hard-earned cash, including filing lawsuits against the banks and bank owners. But when they reached an impasse he began to believe they would never get justice.

“When the government and banks realise that the people won’t just stand by as they lose their life savings and are ready for bloodshed, they will figure out a way to give the people their hard-earned money back,” he said.

This wasn’t his first rodeo, either. He also supported Sally Hafez,  who held up the Blom Bank on September 14 and forcefully withdrew $13,000 of her $20,000 savings.

So far, heisters have managed to avoid any charges, thanks to a piece of legislation which permits the use of force and the committing of an offence in self-defence and defence of one’s money.

Most of the more than 20 heists this year have drawn broad public support.

Many of the hold-ups have seen supporters rally in front of the bank. They would bring megaphones and encourage the heisters to stay inside until they get the full amount of money they need, and pressure security forces to defuse the situation without force.

Some lawyers say that people like Mr Ollaik are misusing the penal code and putting people’s lives in danger. The success of Ms Hafez’s raid, in turn, raised Mr Ollaik’s profile. He says that more depositors have been reaching out to him to help them plan a heist.

At 3am on November 3, 16 long hours after the Lebanese army’s special forces began surrounding the bank, Mr Ollaik and Col Bilal Mahfouz struck a deal and released the hostages. The compromise was that Mr Ollaik and the depositors would turn themselves in, on the condition they could keep the money they took from the bank. Another requirement was that the depositors and Mr Ollaik wouldn’t be assaulted in front of the people and news organisations outside.

Before Mr Ollaik and Mr Sahli opened the doors, the lawyer told the hostages: “I know that the deal they gave us is probably a lie, but I will take it regardless, since we have held you guys long enough and don’t want you to suffer any more.”

Mr Sahli promised the bank manager chocolates and flowers, saying he “had no other option”.

The depositors were forcefully escorted out of the branch by armed security forces and have since been detained in the Justice Palace in Baabda.

Mr Beydoun says he has no regrets. He has paid off most of his debts with the $37,283 he managed to withdraw. With the $5,000 left, he plans to buy medication and pay medical bills. 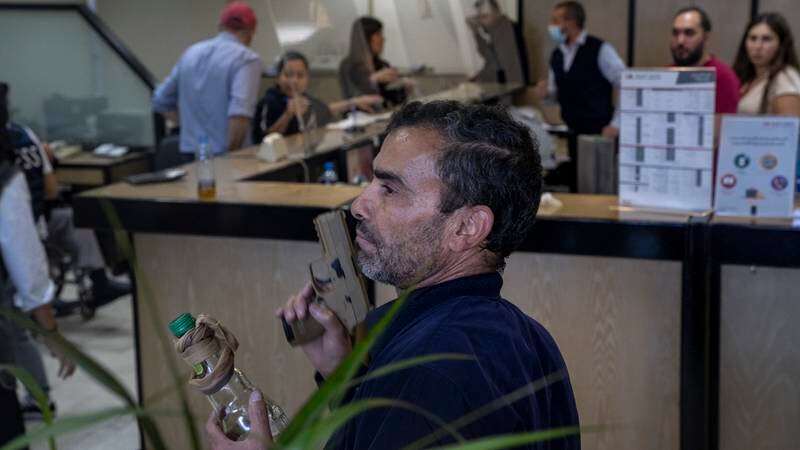