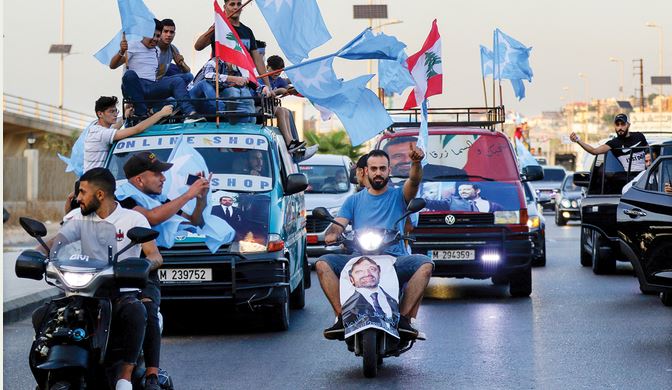 The development came amid renewed initiatives from the speaker of parliament, Nabih Berri, to push toward the formation of a government after seven months of deadlock.

The Lebanese parliament on Saturday reiterated its firm choice of Hariri to form the government.

The parliament’s remarks came in response to President Michel Aoun’s letter calling for an alternative to Hariri.

Tensions between the president’s party and Hariri escalated during the parliament’s plenary session on Saturday.

According to Berri’s initiative, the government should include 24 ministers who are nonpartisan specialists, with no veto power for any political side.

Berri’s initiative also called for the easing of tensions around the distribution of the interior and justice portfolios.

Berri’s mediation between Aoun and Hariri is supported by the Maronite Patriarch Beshara Al-Rahi and powerful political parties from the ruling class.

Bogdanov conveyed his country’s firm position, insisting that Hariri must form the next government.

Russia’s Foreign Ministry announced in a statement that the meetings focused on the “mission of forming a technocratic government led by Hariri and capable of addressing Lebanon’s urgent and pressing economic and social issues.”

Russia considered that “there is no alternative for Hariri in this particular mission, as he is the most appropriate person for the mission of securing foreign support,” the statement added.

It said the situation in Lebanon cannot support any further delays: “All signs are warning of a near disaster if a political solution is implemented immediately.”

Vice President of the Future Movement Dr. Mustafa Alloush told Arab News that he hopes “it became clear to Aoun that he will never get a veto power in the government” and that “he accepts the solutions for the interior portfolio, which he has been insisting on having for so long.”

“But the Russian initiative does not have that pressure. Anyway, let us wait and see what is going to happen.”

Alloush did not eliminate the possibility of Hariri visiting the Presidential Palace once again.

“However, a government with veto power will never see the light,” he confirmed.

He added that Berri “is seeking to convince Hariri to visit the president to propose a government in line with this initiative,” and that “the initiative will be put forward at the beginning of next week.”

On Oct. 22, Hariri was instructed to form a new government after the resignation of then-Prime Minister Hassan Diab in the aftermath of the Aug. 4 explosion.

Hariri suggested a government of 18 specialists, in line with the French initiative. Aoun rejected the proposal claiming that “it does not include the principles set by the president or the charter standards contributing to national partnership.”

Aoun has since insisted on having a blocking third in the government, as well as the right of naming the Christian ministers.

Diab refused on Thursday to sign a draft decree referred by Justice Minister Marie Claude Najm to appoint four judges, considering that the “signing the document does not fall within the power of the caretaker government, and therefore, would constitute a constitutional violation.”

Amid the governmental paralysis, the Supreme Judicial Council has decided to stop working from Friday due to the failure to name alternatives for the outgoing members, caused by political disagreements over new candidates.

Elsewhere, Court of Cassation Advocate-General Ghassan Khoury has ordered the Internal Security Forces’ Division of Information to arrest Lawyer Ramy Ollaik and bring him handcuffed to the investigations’ bureau. He was recently blocked from appearing at the court for investigations.

Ollaik is facing a complaint by the Supreme Judicial Council to Judge Ghassan Oueidat and is accused of slander, libel and the defamation of the judiciary.