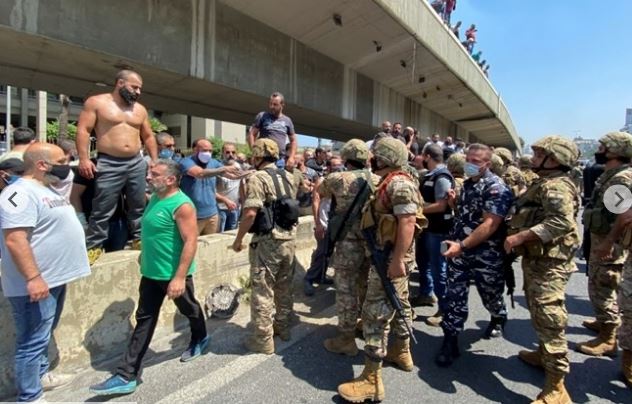 BEIRUT: Protesters blocked off buses and cars carrying scores of Syrians heading to their embassy in Beirut Thursday to vote in Syria’s presidential election, witnesses said.

They said some protesters, believed to be supporters of the Lebanese Forces (LF) party, attacked the convoy with stones and sticks as it droved through Nahr al-Kalb highway north of the capital. Videos circulating on social media networks showed groups of men assaulting vehicles carrying Syrian voters and in one video, no fewer than six men surround a vehicle and kick through its windshield while beating up passengers inside.

There were similar incidents in several areas around Beirut.

The Syrian Embassy had opened its doors to voters in an election expected to yield a win for President Bashar Assad who has held power for the past 21 years. Dozens of Syrian embassies abroad, including those in Russia, Jordan and Kuwait, also opened their doors to voters. But several countries that oppose Assad have blocked the vote. Polling inside Syria is set for next Wednesday.

The election will be the second since civil war erupted in 2011. The conflict has killed more than 388,000 people and prompted more than half of Syria’s prewar population to flee their homes.

Lebanon, which is grappling with an economic crisis, says it hosts some 1.5 million Syrians, including around 1 million registered as refugees with the United Nations.

The country of more than 6 million people has pressured refugees to return home but human rights groups still deem the country unsafe.

Buses carrying hundreds of voters featured pictures of the incumbent president on the windows.

“They don’t need to carry pictures and flags for an absurd criminal regime,” said Fadi Nader, one of the protesters. “If they want to vote, they can go home and vote there… Since they love Bashar Assad, why don’t they go home?”

LF chief Samir Geagea said Wednesday that the thousands of Syrians who are voting for Bashar Assad are clearly not fearful of his government and don’t seem to be refugees afraid of returning home. He called on the government and president to arrange for their return to Syria.

Lebanese army soldiers stood guard as Syrian citizens who live in Lebanon queued outside their embassy in Yarze, east of Beirut, to cast their ballots. Some shouted slogans in support of Assad as they waited.

“The Syrians that want to vote for Assad inside Lebanon are supporters of the regime … so they should go ahead, pack their things and return to their land,” one post said. – With Agencies.