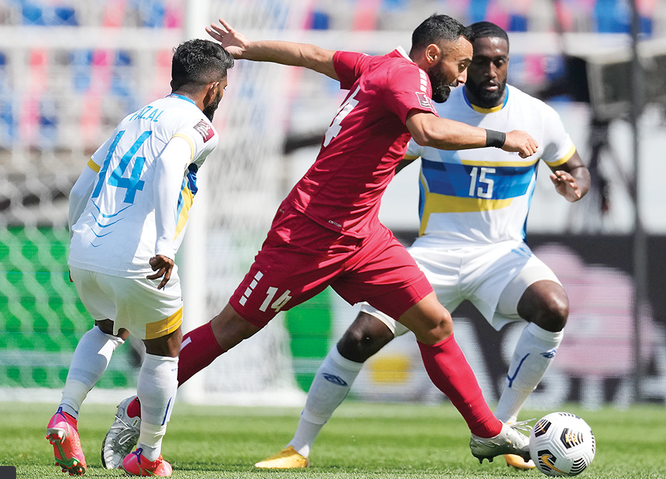 It was South Korea’s third win in four matches, the only blip being a goalless draw against Lebanon in November 2019 before COVID-19 played havoc with the competition.

The Lebanese had taken first place by beating Sri Lanka 3-2 in the first part of a double-header in Goyang, South Korea.

Victory in the second match allowed the hosts to retake top spot with a far superior goal difference.

Lebanon bounced back from a goal down to beat spirited Sri Lanka with Joan Oumari finding the net twice.

Berlin-born Waseem Razeek gave Sri Lanka a shock lead in the 10th minute after taking advantage of a defense-splitting pass by Kavindu Ishan and finishing past Lebanon goalkeeper Mehdi Khalil.

Sri Lankan joy lasted barely a minute. Oumari found the equalizer immediately after the restart as he headed in an excellent free-kick taken by Mohamed Haider.

Mohammed Kdouh then put Lebanon ahead in the 17th minute, rising above the defense to head home another great cross from the right by Hussain Zein.

The Cedars took a two-goal lead into the break after Oumari struck from six yards in the 44th minute when the Sri Lankan defense failed to clear a corner.

Sri Lanka started strongly after resumption and could have pulled one back but Razeek’s free-kick was deflected onto the post by goalkeeper Khalil.

Razeek netted his second goal of the day, firing into the roof of the net from the penalty spot after he was brought down by Hassan Chaitou.

The Turkmens, meanwhile, spent the game chasing shadows as they crashed to their third defeat in five group matches to stay third, four points behind the top two.

Paulo Bento’s South Korea took the lead when Hwang headed home from a long cross from Hong Chul in the 10th minute.

In first-half stoppage time, however, Charyyev could only parry an effort from Kwon Chang-hoon into the path of the Qatar-based Nam Tae-hee who tapped in.

When Kim Young-gwon found the net in the 57th minute from a corner by Son Heung-min which was headed down by Jung Woo-young, the outcome was more or less sealed.

Kwon Chang-hoon increased the tally in the 63rd minute and Hwang added his second in the 73rd to complete an impressive display for the Taegug Warriors.