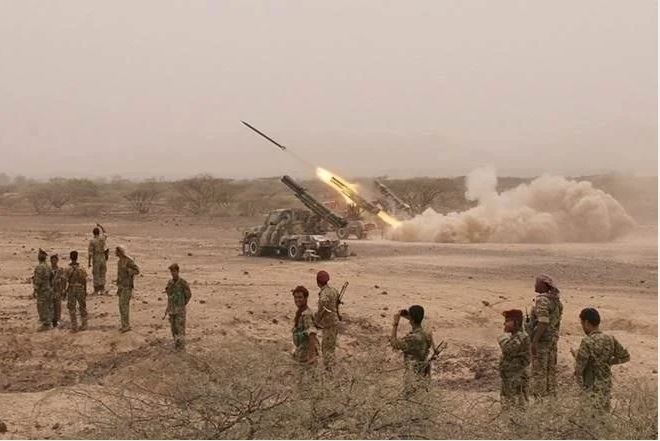 RIYADH: Coalition air defenses intercepted an explosives-laden drone launched by Yemen’s Houthi militia toward Saudi Arabia late on Saturday, the alliance command center said early Sunday.
In a statement carried by state TV Al-Ekhbariya, the coalition said the weaponized UAV was aimed at the southern Saudi city of Khamis Mushait along the border with Yemen.
It was the latest in a series of missile and drone attacks by the Iran-backed militia against Saudi Arabia since the Kingdom spearheaded a coalition to restore the UN-recognized government in 2015.
Ignoring calls to support the peace negotiations being brokered by the UN, the militia has also refused to end its offensive in the city of Marib.
Brig. Gen. Turki Al-Maliki on Saturday dismissed as “fabricated” video footage released by the Houthi movement claiming an incursion by its fighters into a Saudi Arabian border area on the frontlines.
The Arab Parliament condemned the attacks in a statement on Saturday, adding that the repeated hostilities not only threatened the Kingdom, but also posed a danger to regional security and stability.
The Organization of Islamic Cooperation (OIC) strongly condemned the Houthi militia’s continued launching of drones to target populated areas in the Kingdom.
Secretary-General Dr. Yousef Al-Othaimeen said the OIC supports all measures taken by the coalition forces to protect civilians and civilian objects.
The Muslim World League (MWL) said these repeated attempts by the Houthis to threaten the Kingdom’s security and stability and global trade require the international community to combine its efforts to put an end to these terrorist risks that are backed by Iran.
“On behalf of the councils, groups and bodies around the world, the Muslim World League stands by Saudi Arabia and fully supports the measures it takes to defeat terrorism in all its forms and manifestations, and to preserve its security and stability and that of the region and enhance peace,” said MWL Secretary-General and and President of the Association of Muslim Scholars Mohammed bin Abdul Karim Al-Issa in a statement.
Al-Issa also condemned the militia’s “hateful and threatening sectarian tendencies,” their deliberate starvation of the Yemeni people, and the recruitment of Yemeni children as a flagrant violation of religious and humanitarian values, as well as international laws.
The UAE denounced the attempted targeting of Khamis Mushait and said the continuation of these terrorist attacks by the Houthi militia reflects its blatant defiance of the international community, its disregard for all international laws, and provides new evidence that these militias are seeking to undermine security and stability in the region.
Bahrain also issued a similar statement.