LONDON — The head of Germany’s public health agency on Friday warned that a third wave of coronavirus infections has already begun.
It comes at a time when the country has started to gradually relax lockdown restrictions, amid a government-led effort to speed up its vaccination rollout to as many adults as possible.

German Chancellor Angela Merkel had previously warned the country could be caught in a third wave of infections if restrictive public health measures were lifted too quickly.

Italy, meanwhile, is reportedly set to impose another near national lockdown over the Easter weekend in an effort to curb the spread of the virus.

The move, which is expected to be signed into law on Friday, comes just over a year after it became the first country in the world to impose nationwide lockdown measures.

What’s going on in Germany?

“We have clear signs: The third wave in Germany has already begun,” Lothar Wieler, head of the Robert Koch Institute for Infectious Diseases, told reporters during a news conference Friday.

“The virus is not going to disappear, but once we have a base level of immunity in the population, we can control it,” he added.

Wieler said he was “very worried” about the public

health crisis. He described Germany’s vaccination campaign as a race against a constantly evolving virus but expressed confidence that the country would ultimately be able to bring the virus under control.

Until such a time, Wieler reaffirmed the importance of people wearing face masks in public and maintaining a safe distance from others.

The RKI on Thursday said that the number of confirmed Covid cases over a 24-hour period rose by 14,356, the highest daily tally recorded in Germany in the last two weeks. It reflected an increase of 2,444 cases on the previous week.

The recent upsurge coincides with the spread of a highly infectious variant of the virus first discovered in the U.K. The variant, known as B.1.1.7, has been found to account for more than 46% of new infections nationwide.

To date, more than 2.5 million people have contracted Covid in Germany, with 73,127 deaths, according to data compiled by Johns Hopkins University.

Italy set for an Easter lockdown

As part of these measures, Italy is expected to tackle the spread of the virus by placing almost the entire country in its so-called red zone from April 3 to April 5, a period which includes Easter Sunday and Easter Monday. The red zone is the maximum level of restrictions in Italy’s tiered coronavirus system. At this level, schools, nonessential shops, restaurants and bars will all be closed.

Sardinia, a large Italian island in the Mediterranean Sea, is currently the only region in the country’s white zone. This decision, announced on March 1, means that many measures designed to curb the spread of the virus have been dropped in this area.

At a national level, Italy’s total number of Covid infections surpassed 3 million last week, largely driven by the rapid spread of the B.1.1.7 variant. To date, Italy has recorded 3.1 million Covid cases and 101,184 deaths. 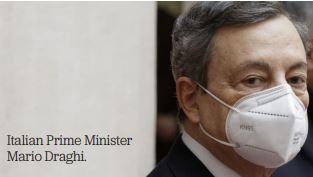