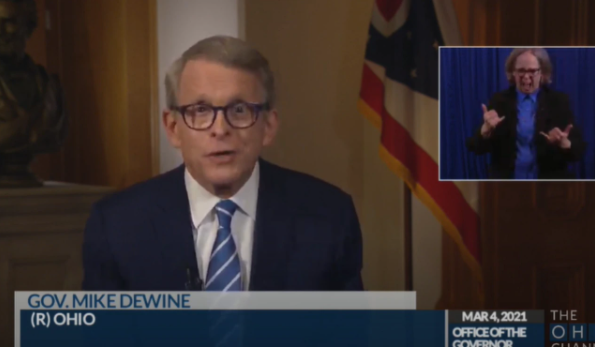 We made it: Ohio has reached the benchmark that Gov. Mike DeWine was hoping for in the coronavirus pandemic: a statewide case rate lower than 50 per 100,000 residents over two weeks, Kaylee Remington reports. DeWine had set the goal on March 4, promising to lift health orders when we got there. But the number became less significant when DeWine decided to lift the orders on June 2 before reaching the goal. Still, DeWine noted in announcing the 49.5 rate over the weekend, “Ohioans have shown our resilience and grit, and by continuing to get vaccinated we are coming through this pandemic stronger than ever.”

Wind and solar under fire: A bill making its way through the Ohio legislature would let local officials ban large wind and solar farms in their communities, usurping the authority than now rests with the Ohio Power Siting Board, Peter Krouse reports. If adopted into law, Senate Bill 52 would place a severe damper on renewable energy projects in the state, according to advocates for wind and solar farms, but it would do more than that, says Sen. Matt Dolan, Republican from Chagrin Falls. It would change the rules midstream and endanger projects already in development, including in some cases after substantial investments have been made. Plus, it would send “a message to everyone that Ohio is not a stable place to invest in.”

Biden budget: Programs to benefit the Great Lakes would be awash with cash if Congress implements the $6 trillion federal budget plan that President Joe Biden recently unveiled, Great Lakes advocates told Sabrina Eaton. Republicans including Portman and U.S. Rep. Dave Joyce of Bainbridge Township back the Great Lakes money, but expressed concern about the package’s overall size and its potential effect on taxes.

Rider on the storm: Daymark Energy Advisors Inc. has been chosen by the Public Utilities Commission of Ohio to independently audit whether FirstEnergy Corp. misused ratepayer money from its distribution modernization rider to lobby for the scandal-ridden House Bill 6 energy law. This is one of several PUCO audits probing FirstEnergy’s involvement with the HB6 scandal, in which ex-Ohio House Speaker Larry Householder and others stand accused of using $60 million in FirstEnergy bribe money to secure the bill’s passage. In 2019, the Ohio Supreme Court ruled the distribution modernization rider itself was improper, though FirstEnergy didn’t have to refund the money it had already collected.

Cyber charges: John Caniglia has the story of a Latvian national who has been charged in an international cybercrime network that attacked millions of computers worldwide and fleeced money and confidential information from unsuspecting victims, including two Northeast Ohio school districts. Alla Witte faces charges of conspiracy, wire fraud, bank fraud and money laundering involving TrickBot, a criminal scheme with origins in Russia, Belarus and Ukraine, according to the 61-page indictment in the case.

Redefining cities: Worried that a change in the federal definition of a “metropolitan area” could diminish federal resources that go to 150 communities around the country, U.S. Sen. Rob Portman of Ohio joined a Michigan colleague last week to introduce legislation that would require a study of how the change would alter federal programs. A current proposal would redefine “metropolitan areas” to include 100,000 people instead of the current 50,000. Portman’s office said the change would affect Ohio communities around Lima, Mansfield, Springfield, Weirton-Steubenville and Wheeling.

Trade talks: United States Trade Representative Katherine Tai participated in a virtual roundtable on Friday with U.S. Sen. Sherrod Brown, workers and elected officials including Maple Heights Mayor Annette Blackwell to discuss how trade policy has affected their lives and their communities. “Going forward, in all of our meetings and policy discussions, we are asking one simple question – how does this help workers?” Tai told the group. “And how do we help communities who have seen factories close, seen the loss of their tax base, as jobs have moved overseas?”

Brian’s (swan) song: State Rep. Brian Stewart said Friday he’s dropping out of the GOP special election race to take over U.S. Rep. Steve Stivers’ 15th Congressional District seat. In an interview, the Pickaway County Republican said that as Stivers endorsed state Rep. Jeff LaRe of Fairfield County to succeed him, LaRe can now count on financial support both from Stivers’ seven-figure campaign account as well as others. “Given the short timeline, we don’t have as much time to make that up before people start voting,” Even with Stewart’s departure, 10 other Republicans besides LaRe remain in the race.

Food service: The Ohio National Guard’s work to assist state food banks and warehouses during the coronavirus crisis will conclude on July 2, according to a news release. Since March of 2020, National Guard and State Defense Force members have helped distribute more than 56 million pounds of food to 14 food banks and regional warehouses across the state. “Quite frankly, we could not have delivered the tremendous response without their leadership and assistance. We will never forget this gift of service,” said Lisa Hamler-Fugitt, Ohio Association of Foodbanks executive director, in a statement.