I am pleased that the House Foreign Affairs Committee moved this week to unanimously pass my bill to support the U.S.- Lebanon elationship, making way for a vote before the full House of Representatives. Now more than ever, American support for the Lebanese people is vital.

U.S. Rep. Darin LaHood (R-IL) announced this month that the U.S. House Foreign Affairs Committee unanimously passed his bipartisan resolution ecognizing the role of Lebanon and its institutions as historic examples of democratic values in the Middle East. “I am pleased that the House Foreign Affairs Committee moved this week to unanimously pass my bill to support the U.S.-Lebanon relationship, making way for a vote before the full House of Representatives,” Rep. LaHood said on Oct. 2. “Now more than ever, American support for the Lebanese people is vital.” House Resolution (H.Res.) 1077, which Rep. LaHood sponsored on 31 with lead cosponsor U.S. Rep. Donna Shalala (D-FL), also would express U.S. support for the continuation of democracy and democratic ideals in Lebanon, according to the congressional record summary. Further, H.Res. 1077 would recognize the Lebanese Armed Forces (LAF) as the sole institution entrusted with the defense of the sovereignty of Lebanon and support strengthening U.S. partnerships with the LAF, the summary says, and would encourage Lebanon to combat corruption in government, execute structural reforms, and work with international financial institutions to stabilize the economy. “My resolution reaffirms our country’s commitment to the people of Lebanon and to peace in the region,” said Rep. LaHood, co-chair of the U.S.-Lebanon Friendship Caucus. “A strong, independent, and sovereign Lebanon can help provide stability in the Middle East, and I will continue to work with my colleagues to support a productive and sustainable U.S.-Lebanon relationship.” The resolution was amended during the House Foreign Affairs Committee markup session to include recognition of an explosion in August at the Port of Beirut and would recognize that the U.S. stands with the people of Lebanon in providing support for humanitarian assistance and recovery, according to Rep. LaHood’s office. H.Res. 1077 currently has a total of 32 other cosponsors, including U.S. Reps. Steve Stivers (R-OH), John Moolenaar (R-MI), Adam Kinzinger (R-IL), Michael McCaul (R-TX), Brian Fitzpatrick (R-PA), John Shimkus (R-IL), Dave Joyce (R-OH), Guy Reschenthaler (R-PA), and Rodney Davis 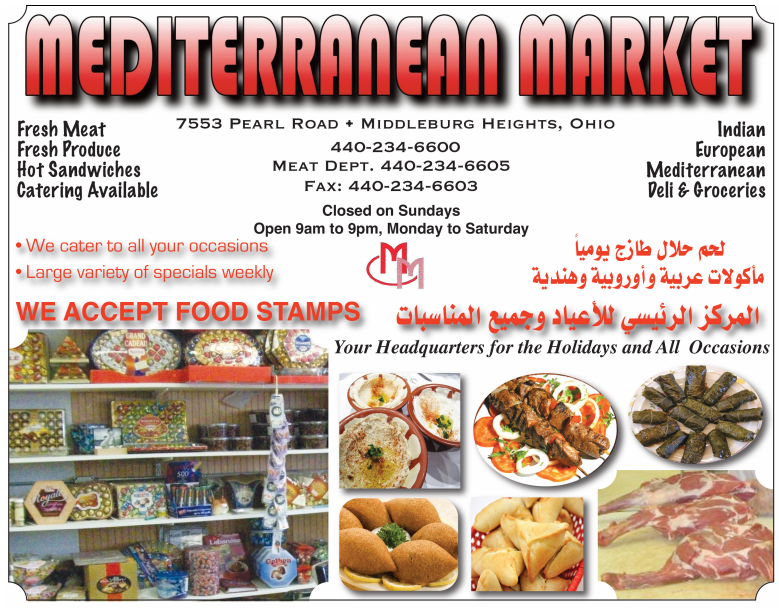 #One Business This Week

The business with the highest reviews this week was the Mediterranian Market at 7553 Pearl Rd, 44130.

Well renouned restaurants have commended their food produciton and their customers are more than happy with the great quality of service and the authentic Lebanese taste.

We will be happy to share your events. Please email us the details and pictures at news@profilenewsohio.com