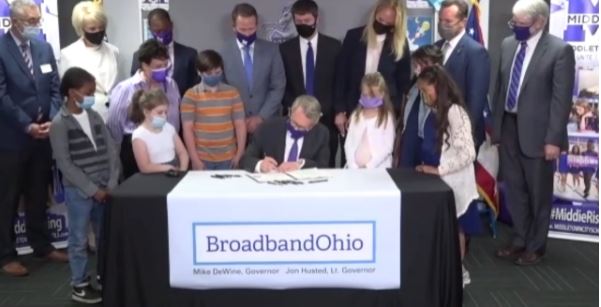 COLUMBUS, Ohio—The state of Ohio will offer $20 million in grants to expand high-speed broadband internet service around the state, under a new law signed Monday by Gov. Mike DeWine.

DeWine later signed two other bills Monday offering more than $680 million in federal coronavirus aid to a variety of businesses and services.

House Bill 2, which passed the legislative by overwhelming, bipartisan margins, also creates a system to help distribute far greater sums of money in the future toward helping parts of the state where it’s currently cost-prohibitive for telecommunications companies to extend high-speed (or, in many cases, any) internet service.

The new law will mostly help rural areas, proponents say, though they add that the grants will help Ohioans in every legislative district in the state.

The law provides $20 million this fiscal year for broadband grants. At one point, the bill contained an additional $190 million in grant funding for the next two years, but lawmakers removed that language and said they will instead work out details about that additional money in ongoing state budget negotiations. That’s in part so lawmakers can wait to see how much Ohio will get in federal broadband grants.

The grants provided by HB2 will be awarded by a five-member authority consisting of the director of the Ohio Development Services Agency, a member of the DeWine administration’s InnovateOhio initiative, and one appointee each from the governor, Ohio House and Ohio Senate.

DeWine, speaking at a bill-signing ceremony at a Middletown elementary school, said HB2 is “really the first major big step” toward ensuring that every Ohioan has access to high-speed Internet.

Not only does the bill provide an initial round of grant money, the governor said, but it creates a “framework” to offer more money in the future not only to expand broadband infrastructure, but make internet access more affordable for state residents.

As the coronavirus crisis has kept both schoolchildren and adults at home, DeWine said, it’s highlighted the divide between parts of the state with and without affordable, high-speed internet – not just in rural areas, but urban and suburban parts of the state as well.

State Rep. Rick Carfagna, a Delaware County Republican, added that while HB2 “not going to solve the problem (of internet access) overnight,” it will help Ohio to “maximize” the use of federal funds and free up millions of dollars’ worth of private investments.

“The private investment will allow us to move on to other policy discussions about other barriers to access, such as affordability, such as digital literacy,” Carfagna said. “Access to broadband – I’m not exaggerating when I say this – it is life-changing.”