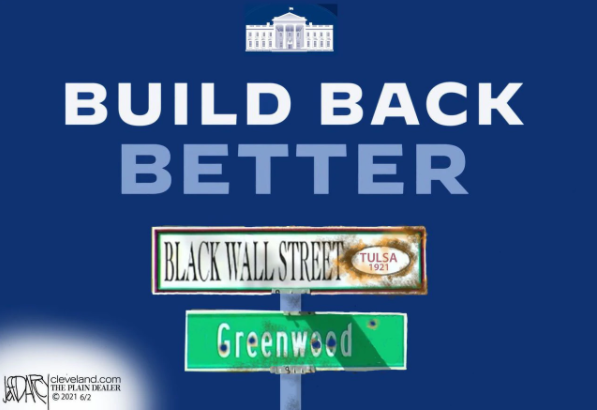 CLEVELAND, Ohio — Tuesday, the first day after Memorial Day weekend, President Joe Biden became the first and only U.S. President in 100 years to address the heinous Tulsa race massacre, arson and fire bombing, in which WWI veterans were among those killed.

On May 31 and June 1, 1921, a white mob massacred hundreds of Black Americans and burned to the ground blocks of the thriving “Black Wall Street” Greenwood neighborhood of Tulsa, Oklahoma.

During the massacre, white supremacists were deputized by police and fire bombs were dropped from planes onto homes and businesses.

Some who were killed were thrown into mass graves, one of which was just discovered and is being studied.

Survivors of the massacre were forced into internment camps guarded by the National Guard and then warned to not disclose where they had been when released.

Other race riots and burnings happened across the county, at the time and for decades later, including the Hough Riots in the Hough neighborhood of Cleveland in the 1960′s.

The Tulsa travesty has rarely been mentioned in primary and high school history classes and hadn’t been taught at all in Tulsa schools, while the history of slavery and lynchings have been.

LeBron James and Maverick Carter from Akron, Ohio, have produced a documentary on the massacre, airing on CNN.

“Just because history is silent, it does not mean that it did not take place. Hell was unleashed, literal hell was unleashed,” said President Biden, recounting some of the cold blooded executions.

“Some injustices are so heinous, so horrific, so grievous, they cannot be buried, no matter how hard people try. Only with truth can come healing.”

“We cant just choose what we want to know, and not what we should know, I come here to help fill the silence, because in silence wounds deepen.”

Warren G. Harding had only been President for a few months on June 1, 1921. He followed President Woodrow Wilson, who had shown in the White House D.W. Griffith’s infamous “Birth of the Nation” film lionizing the KKK as heroic. Wilson gave it a hearty thumbs up.

Former President Donald Trump had infamously held a campaign rally in Tulsa on ‘Juneteenth’ in 2020 and made no mention of the Juneteenth Black holiday celebrating the end of slavery or the Tulsa massacre.

President Biden in his address said he will have first female Black Vice President Kamala Harris lead the White House effort to get the new Voting Rights Act Bills passed in Congress, at the same time Republican governors and State legislatures, like in Texas, are trying to strip and restrict minority voting rights, and give judges the ability to overturn elections based on fraud allegations alone, with no evidence

Former Cleveland Congresswoman and new HUD Secretary Marcia Fudge was in attendance and also mentioned by President Biden as being committed to efforts to narrow the racial wealth gaps and end blatant discriminations in appraisals.

The President said he wants to see the share of federal contracts awarded to small, disadvantaged businesses increase by $100 billion.

So far, President Biden has only said he supports a study of paying reparations, not that he would approve of them.

Keep in mind when reparations are being discussed, that taxpayers are now still paying a six figure yearly pension to retired General Michael Flynn who just endorsed a coupe of the U.S. at a QAnon convention.

During his visit to Tulsa, President Biden met with the three remaining survivors of the 1921 massacre, who are now between 101 and 107 — Lessie ‘Mother Randle” Benningfield Randle, Viola “Mother” Fletcher and Hughes “Uncle Red” Van Ellis. One of them is said to be still struggling financially. At the very least for the three, reparations are 100 years overdue.