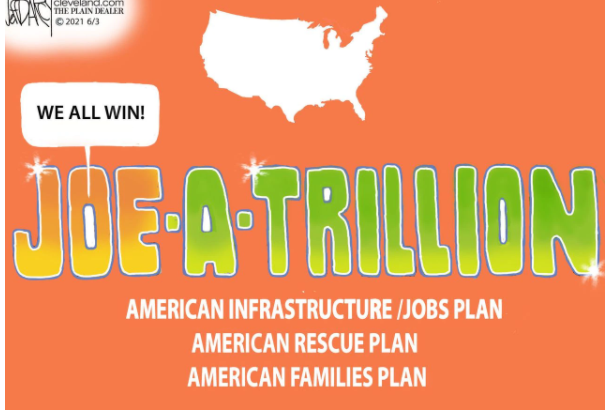 CLEVELAND, Ohio — So far, four people have won Ohio’s Vax-A-Million and Scholarship lottery, with three more drawings to go. President Joe Biden believes everyone in America will win with his $6 trillion plus plans.

Friday, President Biden had put forth his budget for fiscal year 2022 that encompasses his already introduced ‘American Infrastructure/Jobs Plan’, ‘American Families Plan’ and the ‘American Rescue Plan’, which is the Covid-Relief package that was first to be introduced and passed.

The administration has put a new deadline of next Wednesday to reach a deal on the president’s trillion dollar infrastructure & jobs plan. President Biden and Sen. Shelley Moore Capito of West Virginia met at the White House yesterday to try and finalize a deal on it. They emerged only to say they will talk again Friday, perhaps by phone instead.

Just as the Biden administration had set a second deadline date, Sen Capito may return Friday with a second counter offer from Republicans.

Senate Minority leader Mitch McConnell has given Sen Capito the go ahead to take the lead in the negotiations. Unlike on the police reform deal, it appears more unlikely that a bipartisan deal will be reached on infrastructure. On paper Biden is at a $1 trillion and Capito and the Republicans come in at just under a $1 trillion. But in actuality, they are still $billions apart on spending, what constitutes “infrastructure” and how it will be paid for. President Biden is sticking with the ‘pay-for’ being a corporate tax increase.

Look for the plan to be passed through budget resolution as the American Rescue Plan was. The president will point to his meetings and calls with Sen Capito as proof that he had made a good faith, extended effort to reach a bipartisan deal to no avail, leaving he and Democrats no choice but to go the other route.

Wednesday, the winners of Ohio’s second Vax-A-Million lottery were announced. Jonathan, a driver for Amazon from Toledo, won the $1 million prize, which comes out to just under $600,000 after taxes.

Zoie, from Mayfield Village won the college scholarship. Congrats to both and two Governor Mike DeWine. His Vax-A-Million plan has been a winner, succeeding in its objective of increasing Covid-19 vaccinations, helping the United States reach its goal of having 70% of Americans vaccinated, at least once, by July 4th.