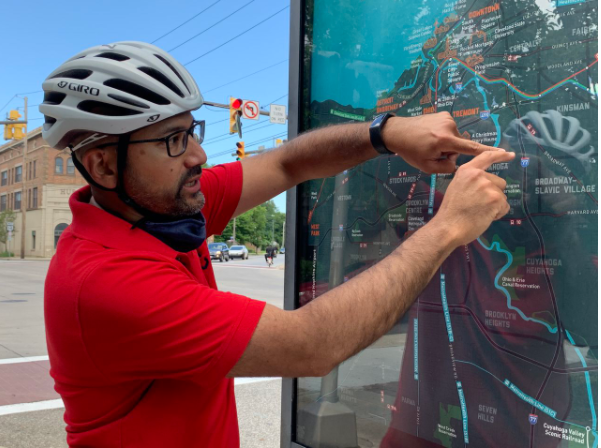 CLEVELAND, Ohio — Chris Alvarado, the executive director of Slavic Village Development, was at his desk on Wednesday, November 27, 2019, the day before Thanksgiving, when a shudder ran through the solidly-built, early 20th-century bank building where his offices are located.

Looking outside, he saw a four-car accident at the five-point intersection of East 55th Street and Broadway, which his building overlooks. One person died after having been ejected from one of the cars.

“You’ve got long stretches without stoplights and stop signs so you can build up a lot of speed,’’ Alvarado said, adding that he’s come to expect at least one bad accident a year at the intersection.

Alvarado said he fears there could be more bad accidents on city arterials if the board of directors of the Northeast Ohio Areawide Coordinating Agency, NOACA, approves the current draft of its eNEO2050 Long Range Transportation Plan update at their Friday, June 11 board meeting.

The plan appears to suggest, he said, that congestion on regional highways could be abated by encouraging more traffic on urban arterials, a category that would include major streets in Slavic Village, such as Broadway, Pershing, and Harvard avenues.

In part, that’s why he and more than 90 other people as of Tuesday signed a letter to NOACA drafted by Jacob VanSickle, executive director of Bike Cleveland, that asks NOACA to reconsider portions of the draft plan. The public comment period on the latest draft, unveiled by NOACA in early May, ends Wednesday.

Other signers of the VanSickle letter include Marc Lefkowitz, a Cleveland-based sustainability consultant, and Angie Schmitt, a Cleveland-based consultant on pedestrian safety and author of the recently published book, “Right of Way: Race, Class, and the Silent Epidemic of Pedestrian Deaths in America.’’

Grace Gallucci, NOACA’s executive director, said Tuesday she welcomes the comments and will be setting up a meeting before June 11 with VanSickle to discuss his letter, a fact he confirmed.

But she said the draft plan seeks to encourage motorists to use arterials for certain trips rather than highways, which would cause drivers to burn more fuel and generate more pollution.

“We’re trying to get people to be more thoughtful about all their trips,’’ she said.

As for the intersection of East 55th Street and Broadway in Cleveland, she said Alvarado’s description raises a safety issue that needs to be addressed.

NOACA, founded in 1968 by the federal government, is an MPO, a Metropolitan Planning Organization. It coordinates federal and state transportation spending in Lorain, Cuyahoga, Lake, Geauga, and Medina counties.

The federal government requires an update to NOACA’s Long Range Transportation Plan every four years. The new draft update could be approved on June 11 by NOACA’s 46-member board, which includes a proportional representation of officials from the five-county region.

The draft shows that NOACA wants to spend roughly $13.4 billion in federal, state, and local revenues over 30 years to maintain road networks and improve transit systems while expanding options for bicyclists and improving safety for pedestrians. 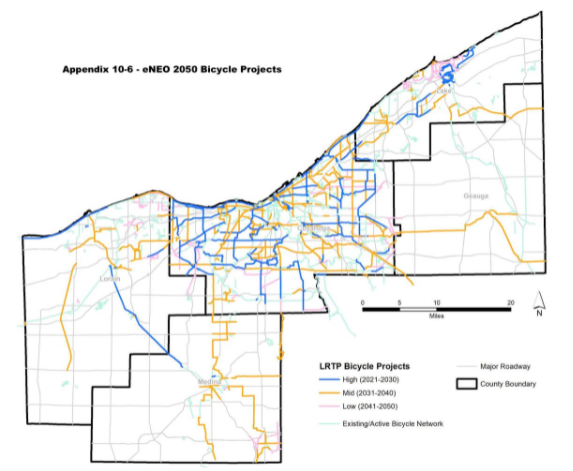 Schmitt and VanSickle serve on community advisory committees for NOACA. VanSickle said he presented his critiques at a recent meeting of the NOACA Bicycle and Pedestrian Advisory Committee and has circulated various drafts of his letter to agency members.

Gallucci said the agency has received more than 100 detailed comments on the draft Long Range Transportation Plan update, and she’s grateful for the feedback and specifically pleased to hear from the signers of the VanSickle letter.

“I’m thrilled that they’re interested in the plan and helping us make the plan the best it can be,’’ she said. “All of the input is valuable; it makes us look at things again and think about things more.”

The VanSickle letter praises NOACA for proposing 928 miles of new bike paths, trails, and other facilities and over 11,000 improvements to pedestrian infrastructure, such as wheelchair ramps at intersections and mid-block crossings. 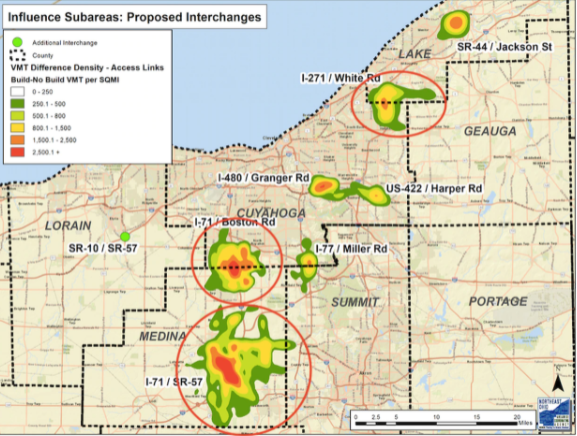 It also gives a thumbs-up to NOACA’s commitment to building a multi-purpose connector trail from Slavic Village to downtown, on Cleveland’s East Side, with a spur to Opportunity Corridor.

Those links would provide safe, off-road hike-and-bike connections to the Towpath Trail on the City’s West Side, and to University Circle, on the East Side. That’s critical in an urban neighborhood with low car ownership rates, Alvarado said.

In addition, the letter lauds NOACA for not recommending the construction of three new, complete highway interchanges in suburban parts of the five-county region that could, as the letter puts it, “further expand sprawl and disinvestment in urban areas.’’

The interchanges were proposed at I-71 and Ohio 57 in Medina, I-71, Boston Road in Strongsville, and I-271 and White Road in Northeast Cuyahoga County.

But the letter criticizes the NOACA plan update for predicting that vehicle miles traveled — a measure of dependency on cars and trucks — will increase by over 7.5%.

According to the letter, the increase would mean “more pollution, more wear and tear and less overall efficiency. … We as a region need to prioritize projects that reduce driving miles to address the impacts driving has on climate change and our region’s air quality.”

The letter states that even though the plan advocates improvements to bike and pedestrian infrastructure, it’s not doing enough to promote walking and biking as alternatives to driving.

The letter also states that NOACA isn’t doing enough to support Vision Zero, a global effort to eliminate traffic fatalities and serious injuries, that it doesn’t offer remedies for historic inequities that have disadvantaged minority communities, and that it doesn’t do enough to promote what it calls a “serious transit expansion plan or agenda” for Northeast Ohio.

“If an overarching theme is minimizing congestion and maximizing arterials,’’ he said, “you’re making it less safe’’ for pedestrians, and not doing enough to encourage people to walk or ride bikes by allocating more space in the right-of-way for alternative ways of getting around.

Gallucci said she’s looking forward to working with VanSickle and others before the June 11 meeting to improve the draft plan. But she also said she firmly believes the plan will improve bike and pedestrian infrastructure and rebalance the system now heavily reliant on automobiles.

“There is a lot of work to get to a point in this region where we have bicycle transit and pedestrian service that is more equitable as compared to the highway system,’’ she said. “Nevertheless, I believe our plan is very aggressive on those things and we are absolutely committed to the principle of equity.”

Elsa strengthens to hurricane as it barrels toward Florida coast

Elsa strengthened into a hurricane Tuesday night as it barreled up Florida's west coast, threatening heavy rain, flooding and high winds. The storm intensified from a tropical storm into a Category 1 hurricane with maximum sustained winds of 75 mph by 7:45 p.m., the...

Here’s why car prices are so high, and why that matters

New York (CNN Business)Maybe America's key inflation metric, the Consumer Price Index, should be redubbed the Car Price Index.CPI climbed to a 13-year high in May, with prices up 5% compared to a year earlier. But about one third of that increase was due solely to the...