CLEVELAND, Ohio (WOIO) – The initial overnight curfew
introduced in an effort to limit person-to-person contacts expired
Thursday, but Gov. Mike DeWine announced an extension to
relieve pressure on the state’s hospital systems.
The extension is now in effect until Jan. 2, 2021, Gov. DeWine
announced on Thursday.
“This has required some really tough decisions,” the governor
said. “And I know that these decisions have impacted Ohioans in
a lot of different ways.”
The curfew hours remain unchanged and will be enforced
between 10 p.m. and 5 a.m.
A variance in the curfew has been added, which applies to
several sporting events, including Monday night’s Cleveland
Browns home game. Attendants will be allowed to attend the
Browns game and the other three events, despite the 10 p.m.
curfew, Gov. DeWine explained 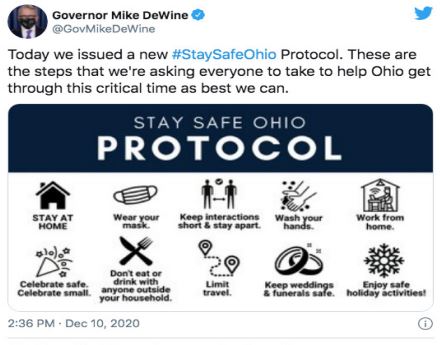 “The start times for these games are dictated by national television contracts, and as a result, the games would not be finished until
after the 10 p.m. curfew,” said Gov. DeWine. “These events have been run consistently with the protocols were asking all Ohioans to
follow.”
The initial three-week curfew was first implemented by Gov. DeWine and Ohio Department of Health Director Stephanie McCloud
on Nov. 17 through Dec. 10.
Retail stores are ordered to close under the curfew, while restaurants could stay open after 10 p.m. for delivery and takeout services
only. Unnecessary and non-essential travel is also prohibited.
Rather than issue any additional restrictions, the governor and about a dozen doctors discussed new “Stay Safe Ohio” protocols, or
basic health measures individuals can follow to ensure the safety of others.
In the three weeks since the initial curfew has been in effect, the Ohio Department of Health reported 1,415 deaths from the coronavirus
and 207,669 new cases.