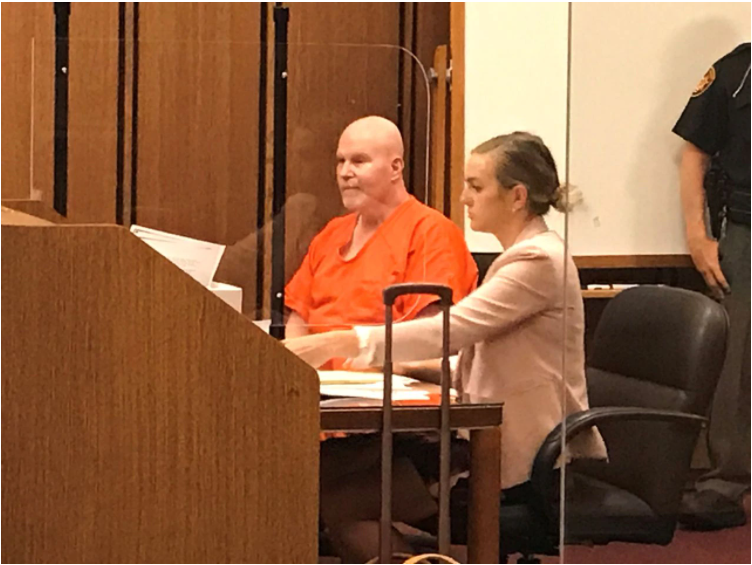 CLEVELAND, Ohio — A Cuyahoga County judge will decide whether to overturn a Cleveland man’s murder conviction after either police or prosecutors withheld dozens of crime scene photographs from his attorneys at his 1989 trial.

Judge Dick Ambrose is deliberating after a two-day hearing if John Tiedjen deserves a new trial in the shooting death of his stepbrother, Brian McGary.

Tiedjen’s previous attorneys found photographs in late 2016, and either prosecutors or court staff lost again sometime after a 2017 court hearing. The photos reveal that police moved pieces of evidence and suggest that McGary’s ex-girlfriend may have been in the house when the shooting happened. The photographs bolster a newly discovered witness who came forward in 2012 and claimed to see a man and a woman running from the house after hearing the gunshots.

Tiedjen’s lawyer, Kimberly Corral, also said during the hearing that prosecutors withheld from the trial a pair of supplemental police reports show investigators likely contaminated the crime scene by allowing McGary’s ex-girlfriend in it.

Corral told Ambrose that the evidence, which wasn’t available to Tiedjen, destroyed the state’s theory of Tiedjen’s guilt.

“The notion that we could conclude that a conviction based on 77 hidden photos and 32 pages of hidden police reports is a conviction that can stand in the system of American jurisprudence system is a notion that defies the fundamental concepts of the Constitutional integrity of our system,” Corral said. “Every aspect of the case that the state relied on to get a conviction has been undermined by the evidence they withheld, that has now been revealed by Mr. Tiedjen.”

Assistant Cuyahoga County Prosecutor Frank Zeleznikar, who denied that police and prosecutors withheld evidence, argued that there was still enough evidence presented at the 1989 trial to convict Tiedjen even if he received the pictures omitted from the evidence.

Common Pleas Court Judge Nancy Margaret Russo denied a similar motion from Tiedjen in 2017 after determining that the photographs did not present new evidence that would have altered the verdict. The 8th District Court of Appeals reversed that decision and ordered the court to reconsider.

The court reassigned the case to Ambrose, who said Friday he expects to make his decision after “a few days.”

McGary was found stabbed in the chest and shot once in the head with a .22-caliber rifle in his bedroom on April 1, 1989, after he and Tiedjen returned to the Slavic Village duplex they shared from a night of drinking. A neighbor reported seeing Tiedjen and McGary get home together and then heard a gunshot. The neighbor saw who he thought was Tiedjen leave alone. The following morning, Tiedjen went to the neighbor’s house and told him that McGary had killed himself and called his mother.

The break in the case came when a Cleveland homicide detective interrogated Tiedjen for several hours on April 5, four days after the killing. The detective told Tiedjen, who was on probation for a rape conviction, that they had Tiedjen’s fingerprints on the gun and that he was going to go to prison for life for murder, according to court records. The detective said he could probably get Tiedjen off on a less severe manslaughter charge, which did not carry a life prison sentence if he confessed that day. The detective said he thought Tiedjen acted in self-defense after the two got into a fight in the living room, where Tiedjen stabbed McGary. The wounded McGary retreated to his bedroom and grabbed a pistol, and Tiedjen shot him from the hallway, the records said.

Tiedjen repeatedly said he didn’t remember what happened because he passed out from being drunk and high on marijuana.

A test of McGary’s hands turned up no gunshot residue to indicate that he fired a weapon before his death.

Tiedjen eventually signed the confession. He was arrested and later charged with aggravated murder.

The case went to trial about six weeks later. Then-Assistant Cuyahoga County Prosecutor Steve Dever told jurors in opening statements that he believed Tiedjen shot McGary from about 18 inches away. That theory changed after a Cuyahoga County Coroner’s Office pathologist testified that McGary was shot from two feet away.

Dever, in his closing argument, said that the shooting took place from a distance. The jury convicted Tiedjen, and he was sentenced to life in prison with his first chance at parole after 18 years.

After losing several appeals, Tiedjen’s break came when his attorney in 2016 obtained the police case file that showed that police took 87 crime scene photographs of McGary’s death. Prosecutors only submitted 10 for use at the trial.

Dan Chaplin, Tiedjen’s defense attorney in his 1989 trial, testified that he had never seen the other 77 photographs before and would have used them in his defense of Tiedjen if he had. Dever insisted he always turned over any evidence that might be exculpatory and said his biggest fear was convicting an innocent person.

He said he could not remember if he did or did not turn them over.

The photographs showed that police took two different sets of pictures. The first came right after investigators arrived at the house. Investigators took the second April 6, one day after Tiedjen’s confession, and some items were moved.

A pair of Tiedjen’s eyeglasses resting on the coffee table in the first set of photos lay on the floor next to a puddle of McGary’s blood in the second set of photos.

Corral questioned whether police returned to the house and moved Tiedjen’s glasses to the floor to make it seem like a struggle ensued.

“Once they coerced Mr. Tiedjen into their statement, they had to make the evidence look like that happened,” Corral said.

The newly discovered photos showed a purse, a woman’s vest and a men’s jacket on a chair in the apartment living room not included in the photographs submitted at trial, Corral said. Police later learned the purse belonged to McGary’s ex-girlfriend and the jacket remains unaccounted for, Corral said.

Corral said those photos show that it was possible that the ex-girlfriend and another man were present for the shooting and left in a rush. The theory would support the account of a man who came forward in 2002 and signed an affidavit saying he saw a man and a woman rush out of the house and jump into a black truck after a gunshot.

Tiedjen’s defense also got hold of police reports that showed that the ex-girlfriend called police several days after the shooting and asked to be let into the house so she could get her purse, and police obliged. There was no documentation about whether or how officers escorted the ex-girlfriend through the crime scene.

The reports also showed that police sought to interview Tiedjen’s ex, but there was no report, statement or confirmation that they ever spoke to her. They also referred to statements from other people, including Tiedjen’s brother, but police never produced copies of those statements, Corral said.

“To this day, the complete investigation has never been made available to the defense,” Corral said.

The omitted pictures showed McGary had a piece of flannel fabric wrapped around his hands, a folded piece of paper in his pocket and a piece of paper next to his body on the floor. Investigators never included the pieces of paper as part of the evidence, and did not mention them in any of the reports.

Tiedjen’s attorney in 2016 took the photographs to Scott Roder, the owner of the forensic crime scene reconstruction and 3D modeling company Evidence Room.

Roder testified Friday that photographs showed that McGary’s gunshot wound to his head was at close range, not the minimum of 18 inches that prosecutors told jurors during the trial. He also noted that police wrapped McGary’s hands in clear plastic wrap instead of a paper material before testing his hands for residue. Roder said that the plastic would have wiped off any gunshot residue that may have been on McGary’s hands. He also said that the flannel wrapped around his hands could explain why his fingerprints were not on the rifle.