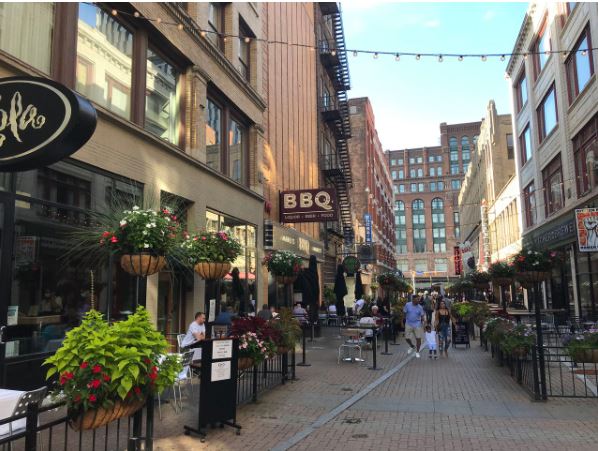 That’s a whole lot of taxpayer dollars that won’t be available for discretionary spending — or to pay bills, buy food or provide for other necessities of life.

How can that be a good thing?

It’s not, if you talk with those who believe the payments should continue, including one expert who says $1 billion could translate to an overall economic impact of more than $1.6 billion. But ending the payments could be a good thing, say others, if forgoing the money does what it’s designed to do – wean the jobless off unemployment and restart sectors of the economy jammed up by a lack of willing workers.

The question is, will that be the case? DeWine and others suggest that it will, but a recent report by the Federal Reserve Bank of San Francisco suggests that it won’t.

The $300-a-week federal pandemic unemployment compensation will end June 26 by DeWine’s order, even though Congress has authorized the extra payments through Sept. 4. More than 20 other states have taken similar steps.

Is that a lot of money?

That depends on your perspective.

The loss of $300 a week, or $3,000 over 10 weeks, may be quite meaningful to those still struggling to find a job or dealing with other -related issues, such as finding suitable childcare or looking after elderly parents. But $1 billion represents only a mere fraction of the nearly $700 billion gross domestic product for Ohio in 2019, the last full year before the pandemic, said Ohio State University economics professor Bruce Weinberg.

While $1 billion is a lot of money, it’s not very significant “in the grand scheme of things,” added Mark Sniderman, adjunct professor of economics at Case Western Reserve University, and the loss should not slow the recovery as supplemental payments were scheduled to expire in September anyway unless Congress renews them.

Zach Schiller, research director at left-leaning think tank Policy Matters Ohio, agrees that losing the federal benefits won’t crush the economy, but he doesn’t consider the loss insignificant, especially when you consider that a $1 billion infusion translates into an overall economic impact of more than $1.6 billion because of the multiplier effect, which is the expectation that initial spending will trigger additional spending in the economy.

“It’s a meaningful amount of economic activity that we’re throwing away,” he said. ” . . . The recovery would be faster if we had that money to spend.”

The wild card in all of this is whether cutting off the supplemental employment will encourage more people to return to work, as DeWine suggested, pumping more money back into the economy.

To put things in perspective, Weinberg offers this rough calculation: If half the 327,000 getting the federal supplement find full-time jobs at $10 an hour, that comes to $65 million a week or $650 million over the 10-week period.

Double the wage to $20 and the economic stimulus would total $1.3 billion, more than what is being taken out by cutting off the supplemental payments.

But how many will go back to work?

If few find jobs and continue to struggle, cutting off the benefit “will turn out to have been a costly decision,” Weinberg said.

On the flip side, if most of the unemployed are motivated to get a job, there may still be individual hardships that continue, but DeWine’s calculation will have been successful.

“My guess is we wind up somewhere in the middle of that,” Weinberg said.

What do others say?

Greg Lawson, research fellow at the conservative Buckeye Institute, acknowledges that there are a number of reasons why people are not going back to work, but that the extra $300 a week in unemployment pay is one of them, especially as it relates to entry level and service jobs.

The whole purpose of government stimulus during the coronavirus pandemic was to suppress the labor force, he said, but now that the pandemic is under control, the workers are needed to revive the economy.

“It’s very obvious that there are a lot of people sitting on the sidelines,” Lawson said, and to think that the additional $300 a week doesn’t contribute, “I think strains credulity.”

Scott Shane, a Case Western Reserve University economics professor who considers himself conservative relative to his fellow academics but middle-of-the-road when compared to the rest of America, said the stimulus made sense when people were forced to stay home, but now that the economy is coming back, DeWine’s action is long overdue.

The extra unemployment compensation makes not working more lucrative than getting a job and as a result, employers are finding it hard to fill positions they need to get their businesses up and running, he said.

But are generous unemployment benefits really to blame?

A just-released study by two San Francisco Federal Reserve Bank economists suggests otherwise. Their research concludes that the supplemental payments, whether the original $600-a-week or the current $300-a-week, factor very little in a person’s decision to seek or accept a job, even among low wage occupations.

Robert Valletta, one of the report’s authors, told cleveland.com and The Plain Dealer that there’s a lot of conflicting information being disseminated, but that their data suggests a generous unemployment benefit “doesn’t really discourage workers by much, it only discourages a small fraction of the unemployed people from accepting job offers.”

The more significant factors for taking a job are health, safety and childcare issues, as well as the duration of the job being offered, whether it’s a steppingstone to something better, and how many other opportunities exist, said Valletta and his co-author Nicolas Petroskey-Nadeau.

So, why not raise wages?

The problem in Ohio is not a labor shortage as some suggest, but a wage shortage, said Policy Matters Ohio researcher Michael Shields.

So, while business owners say they can’t find enough workers, the corollary is that they can’t hire all the workers they want at the wage they want to pay, he said.

And many of the people are faced with going back to jobs, such as in restaurants waiting tables, where they are subject to lower tips or harassment because they must enforce public health-related mandates, he said.

Lawson, of the Buckeye Institute, said corporate giants such as Amazon, Wal-Mart and McDonald’s might be able to raise wages or offer bonuses, but the small Main Street businesses struggling to find workers to reopen can’t afford to do that.

“I’m not saying it can’t be done in some places,” Lawson said. ” . . . but I think you’re going to have a whole host of businesses who simply are not going to be able to do that.”