Merkel’s party to choose new leader ahead of German election

BERLIN (AP) — Chancellor Angela Merkel’s center-right party is choosing a new leader this weekend,
a decision that will help shape German voters’ choice of her successor at the helm of the European
Union’s biggest economy after her 16-year tenure.
Merkel, now 66, has steered Germany, and Europe, through a series of crises since she took office in
2005. But she said more than two years ago that she won’t seek a fifth term as chancellor.

Now her Christian Democratic Union party is seeking its second new leader since she quit that role in 2018. That person will either run
for chancellor in Germany’s Sept. 26 election or have a big say in who does run.
Current leader Annegret Kramp-Karrenbauer announced her resignation last February after failing to impose her authority on the
party. A decision on her successor was delayed repeatedly by the coronavirus pandemic. Eventually, the CDU decided to hold an online
convention this weekend. The CDU as a whole has benefited from the coronavirus crisis, taking a strong poll lead into an unusually
uncertain election year thanks to good reviews for Merkel’s pandemic leadership. Whether any of these candidates could take those
ratings through to the election is uncertain. Saturday’s decision won’t be the final word on the center-right candidate for chancellor 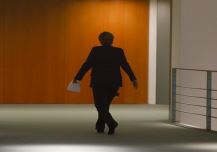