President Biden boasts of American Rescue Plan at Tri-C: The Wake Up for Friday, May 28, 2021 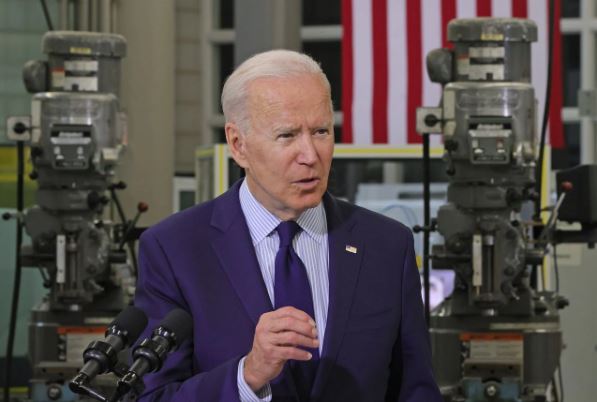 Get ready for a cooler start to the holiday weekend with rain in the forecast both Friday and Saturday. Highs will only be in the 50s both days, but expect skies to clear and temperatures to rise for the second half of the weekend. Read more.

Biden in town: President Joe Biden came to Cuyahoga Community College Thursday to lay out the work that’s been done to rebuild the economy and outline what he felt was needed to recreate the economy for the future. Part boast, part call to action, Biden spent much of the time noting the popularity and – as he described it – success of the American Rescue Plan, Seth Richardson reports.

Stimulus watch: The U.S. Treasury this week released guidelines for how much smaller cities, townships and villages should get from the American Rescue Plan. Ohio is one of eight states where the money could be denied to townships, if the state determines they don’t provide a range of municipal services and wouldn’t have a use for the money. Robin Goist reports Ohio is slated to get $843 million for cities, villages and townships.

Federal inmates: Authorities on Thursday agreed to a contract that will keep hundreds of inmates at a pretrial detention facility in Northeast Ohio, rather than shipping them to Pennsylvania. The Northeast Ohio Correctional Center, a facility in Youngstown owned by private corrections company CoreCivic, will continue to house federal inmates through a compromise with the Mahoning County Sheriff’s Department, John Caniglia reports.

This Week in the CLE: Companies could continue withholding municipal income taxes as they have under a coronavirus emergency law, under a bill passed by the Ohio House. We’re asking how can cities tax people who don’t live or work there on This Week in the CLE, cleveland.com’s daily half-hour news podcast.

Hessler apartments: The Cleveland Landmarks Commission on Thursday gave its blessing to developers who want to build small apartments along historic Hessler Road in the city’s University Circle neighborhood over the opposition of longtime residents, Eric Heisig reports. The property is also the site of a garage that was used as a museum for the annual Hessler Street Fair arts and music festival, which many of the street’s longtime residents sought to preserve.

Color-coded map: For nearly a year, Ohioans could expect a color-coded map each Thursday, showing Ohio’s 88 counties and colors – yellow, orange, red and purple- that were to illustrate how severe the coronavirus outbreak was, Laura Hancock reports. The map will no longer be released. The Department of Health will continue to provide county-level data on cases per 100,000 residents. On Thursday, the statewide average was 82.3 cases per 100,000.

Vax-a-Million winner: Abbigail Bugenske was driving to her parents’ house in Shaker Heights, when Gov. Mike DeWine called and said she won the first Vax-a-million drawing. Laura Hancock reports that Bugenske is a 2016 Shaker Heights High School graduate who is now a mechanical engineer and works for GE Aviation. She has no plans to quit her job.

Wolstein vaccinations: The Wolstein Center mass vaccination clinic will offer the Pfizer/BioNTech vaccine during its final week, until June 7. The vaccine requires two doses taken 21 days apart, so anyone who receives their first dose at the Wolstein Center will be given an appointment for a second shot at an area Discount Drug Mart, reports Evan MacDonald.

Failure to investigate: Cleveland police suspended a veteran detective for 10 days without pay for failing to investigate crimes, Adam Ferrise reports. The department said Det. John Kraynik failed to properly investigate 15 cases from January to June 2019, the year after internal investigators said he sent racist text messages and when he shot and killed a 15-year-old Black teen in 2005.

Pandemic school year: After the pandemic, Laura Johnston will never again take school for granted. We have never felt more grateful for teachers than this year, as we flip-flopped from hybrid back to online school, then eventually returning to full-day, five days a week.

MetroHealth: The KeyBank Foundation is donating $1.5 million to MetroHealth so the health system can bolster its effort to address social determinants of health in Greater Cleveland, particularly in underserved populations, reports Evan MacDonald.

Local pitcher: Ryan Feierabend’s baseball career is built on heart, endurance and a lot of frequent-flyer miles, reports Marc Bona. The former Midview High School star – who was drafted in 2003 by the Seattle Mariners, who has undergone Tommy John surgery, who played in Asian professional leagues, and whose moments in the sun include picking off Derek Jeter – is back at home, playing for the Lake Erie Crushers.