SUSPENDED FLORIDA PROSECUTOR SUES GOV. RON DESANTIS TO GET HIS JOB BACK

MIAMI — A Florida prosecutor is suing Gov. Ron DeSantis for removing him from office.

The state attorney from Tampa, Andrew Warren, was ousted earlier this month by DeSantis. The Republican governor said he acted because of statements Warren had signed pledging not to prosecute people for violating abortion restrictions or a law prohibiting gender-affirming care for minors.

Warren filed a lawsuit in U.S. District Court, saying that the governor violated his First Amendment right to freedom of speech. Although he
spoke in favor of abortion rights and gender-affirming medical care, Warren had not taken any action on those issues and his office had no
cases pending. Warren was twice elected as state attorney, and Warren says DeSantis violated his right to freedom of speech and by his actions overturned an election.

”There’s so much more at stake here than my job,” Warren said at a news conference in Tallahassee.
Warren says DeSantis also violated Florida law by improperly removing him from office for political reasons. “The governor’s authority is not unlimited,” Warren said.

He’s asking the court to rescind DeSantis’ order and reinstate him as state attorney. And he’s set up a legal defense fund.

DeSantis appointed a county judge to replace Warren, at least temporarily. The governor has dismissed other Democratic elected officials, including the sheriff of Broward County, Scott Israel, for failings in his department’s response to the shootings at Marjory Stoneman Douglas High School four years ago. 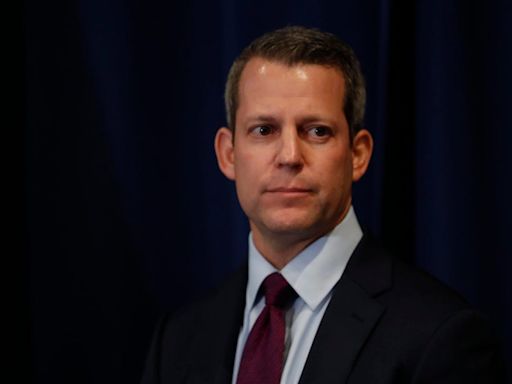