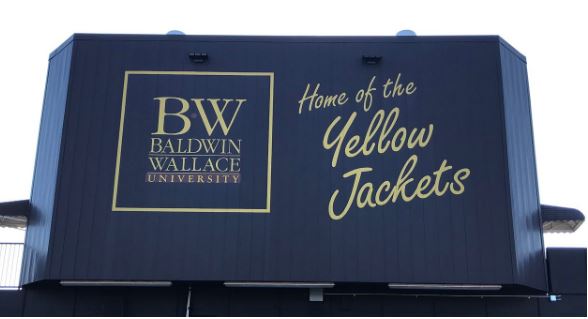 BEREA, Ohio – The sport-management club at Baldwin Wallace University has won an auction to have a Wisconsin minor-league baseball stadium named in its honor.

The Beloit Snappers’ Pohlman Field will be named “Baldwin Wallace University Sport Management Stadium.” It’s only for one day – Saturday, May 29 – but it brings a bit of marketing presence, a few moments of fame and a bit of fun for both the team and club. And it’s for a good cause.

Timing of the initiative worked out well for Baldwin Wallace, said Dr. Charles Campisi, the professor who directs the club. Normally, he takes several of his students to volunteer in support-staff roles at major sporting events around the country throughout the year. Covid put the brakes on that, which had a positive residual effect.

“We had a little money in the budget,” he said. “We talked to the students in the sport-management club, and said ‘Hey, is this something you guys would be interested in as a cool marketing thing?’ They were all about it.”

“We were sweating it. We were hoping a last-minute bid wouldn’t come in,” Campisi said.

So someone could say ” ‘Hey that’s mom and dad’s anniversary, we want that night – boom, bought, done,” said Maria Valentyn, the Snappers’ vice president of marketing and strategy.

he timing also was perfect for the Snappers, who will be moving from their current home on the outskirts of the southern Wisconsin city to the downtown area. A home-run shot over the right-field wall in the new park will land in Illinois, Valentyn said. This is the final season for Pohlman Field; the new park will be ABC Supply Stadium.

“I’ve worked in minor-league baseball for a number of teams, and it’s certainly the most creative (promotion) I’ve been a part of,” said Valentyn, who credits the “genius of the idea” to a team effort.

The Snappers wanted to do something special for fans, something that is not usually offered, since they were ending their 20-year run at Pohlman Field. So they auctioned home dates a month at a time, each night a different name.

She calls it “a nice way to cap out our time here at Pohlman, give people who have come here for years to hear their name constantly over the loudspeakers at a game.”

About eight members of the club will trek to Beloit, more than 430 miles away, for the Snappers’ game vs. the Peoria Chiefs. The naming rights come with an array of amenities.

They’ll be greeted with a sign that says ‘Welcome (name here),” and a huge outfield banner, 8 feet by 20 feet, will hang along the outfield fence. Before the game, the entire group can take the field with the mascot for photos, one member can throw a ceremonial first pitch, and they can sing “Take Me Out to the Ballgame.” If the National Anthem isn’t booked and someone in the group has a nice voice, they can sing, Valentyn said. Bonus: They get to keep the outfield banner.

“Somebody has to figure out whose garage the 8-foot by 20-foot banner is going in,” she said.

Net proceeds from the winning bids go to the Stateline Boys & Girls Club. Valentyn said they hope to raise a few hundred dollars per game, so the season total will run into several thousand dollars for the charity.

Beloit, which plays in the High A minors, is in the same league as the Lake County Captains. The Snappers signed a 10-year deal with their parent club, the Miami Marlins, and the promotion gives them a chance to tip the cap to their fans before moving.

“It just doesn’t get done,” Valentyn said. “You don’t get to let the general fan have a chance at these sponsorships; we know that they come with significant cost. It’s just really fun to give people a chance to have the red carpet rolled out for them, more or less.”

I am on cleveland.com’s life and culture team and cover food, beer, wine and sports-related topics. If you want to see my stories, here’s a directory on cleveland.com. Bill Wills of WTAM-1100 and I talk food and drink usually at 8:20 a.m. Thursday morning. And tune in at 7:05 a.m. Wednesdays for “Beer with Bona and Much, Much More” with Munch Bishop on 1350-AM The Gambler. Twitter: @mbona30.

Get a jumpstart on the weekend and sign up for Cleveland.com’s weekly “In the CLE” email newsletter, your essential guide to the top things to do in Greater Cleveland. It will arrive in your inbox on Friday mornings – an exclusive to-do list, focusing on the best of the weekend fun. Restaurants, music, movies, performing arts, family fun and more. Just click here to subscribe. All cleveland.com newsletters are free.