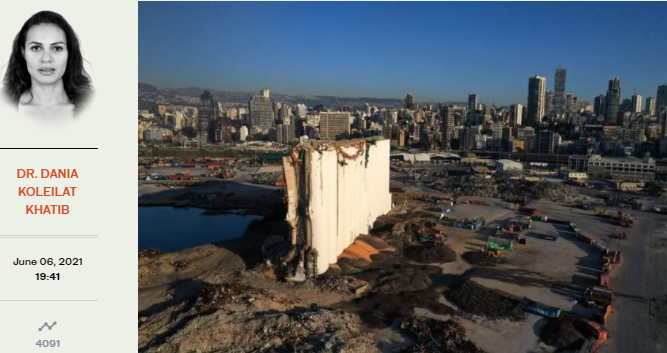 Watching the Lebanese news is like watching the 1993 movie “Groundhog Day,” in which the main character is trapped in time, forced to live the same day over and over again.

Although the days change in Lebanon, the political news is always the same: The president and the prime minister-designate exchange accusations and fail to bring to life a government that will conduct reforms. Amid this never-ending cycle, the World Bank last week issued a report that was similar to a death warrant for Lebanon. The title of the organization’s press release bluntly stated: “Lebanon sinking into one of the most severe global crises episodes, amidst deliberate inaction.”

In addition to this disastrous situation, which is likely to lead to the imminent fall of the system, the region’s politics adds another concern. Israel is anxious as it sees a potential rapprochement between Iran and the US in Vienna, while Washington has a hands-off approach to mitigating the effects of this detente. Lebanon could be the victim of Israel’s anxiety, meaning there is a need for a foreign guarantor that will make sure Tel Aviv’s northern border remains calm and prevent a strike on Lebanon that could lead to its demise.

The Iran nuclear deal talks in Vienna are of great concern to Israel. Defense Minister Benny Gantz headed to the US last week to discuss the repercussions of any new agreement with Tehran. One of the points of concern was Hezbollah’s arsenal and the threat it represents to Israel. Meanwhile, outgoing Prime Minister Benjamin Netanyahu said the Israelis were ready to upset their No. 1 ally in order to fend off what they see as an “existential threat” coming from the Islamic Republic. Israel already appears to be taking action, with fingers pointed over its possible involvement in a refinery fire and the sinking of one of Iran’s largest warships in the Gulf of Oman last week.

Lebanon represents another front where Israel would like to flex its muscles, especially since its next prime minister looks likely to be the far-right Naftali Bennett, who has said the inconclusive 2006 war with Hezbollah drove him to enter politics. Faced with accusations from Netanyahu that he has compromised on the right’s principles by forming a broad-based coalition government, will Bennett want to prove himself to his right-wing constituency by taking a hawkish stand on Hezbollah?

In the meantime, the US is showing no real assertiveness in Lebanon. It has used some sanctions and harsh rhetoric toward the country’s politicians, but it has stopped at that for now. The White House’s interests lie elsewhere, particularly on the Iran nuclear issue. Russia, on the other hand, wants to play a greater role in regional politics and it has interests in the country, but it is reluctant to get sucked into the quagmire of Lebanese politics. Moscow has given a cold shoulder to politicians seeking its support.

However, Russia can play a constructive role in Lebanon because it can have leverage over Hezbollah — and any solution in Lebanon must begin with Hezbollah. The French initiative failed because it asked the politicians to form a government of experts to conduct reforms. In other words, the corrupt politicians needed to step down because those who brought the country to its knees could not conduct reforms themselves. However, Paris doesn’t have enough leverage to push them to take such a step. But Russia can revive the French initiative by putting the right amount of pressure on the right players and giving them guarantees in return.

Hezbollah needs a guarantee that it will not be hit and that its arms will be untouched. Its main reason for taking part in the government is to provide political cover for its weapons. Today, as Lebanon is in a precarious position, it needs a foreign force to prevent an internal clash. Maronite Patriarch Bechara Boutros Al-Rai even said that, since the Lebanese factions could not agree on a solution among themselves, a solution had to come from outside; hence his call for an international conference for Lebanon.

Due to the deep mistrust the Lebanese parties have for each other, there is a need for an outside guarantor. This role can be played by Russia. Moscow can provide Hezbollah with a guarantee that it will not be attacked by Israel in return for a commitment not to expand its arsenal. Russia can also ask, in return for the guarantees it gives to Hezbollah, that the group refrains from participating in the government. Its exit will be matched by the departure of other parties, allowing an independent figure to form a government of independent specialists. If the government is formed by the current political parties, according to the prevalent power-sharing agreement, the Cabinet would be a mere recreation of the useless government of Hassan Diab, which was unable to conduct reforms or strike a deal with the International Monetary Fund.

Given America’s reluctance, Russia is free to start an initiative for Lebanon. The forthcoming summit between Vladimir Putin and Joe Biden, along with the US president waiving sanctions related to the Nord Stream 2 pipeline, shows that, despite the rhetoric of being tough on Russia, the new administration is interested in cooperating with Moscow. Even if the Middle East is not an item on the June 16 Biden-Putin meeting agenda, if Russia starts an initiative on Lebanon it can push the US to pitch in. It is in the interests of both countries to prevent Lebanon from collapsing.

This is why Russia should take the lead and strike a deal with Hezbollah in order to prevent the country from collapsing, as the World Bank report foresees.