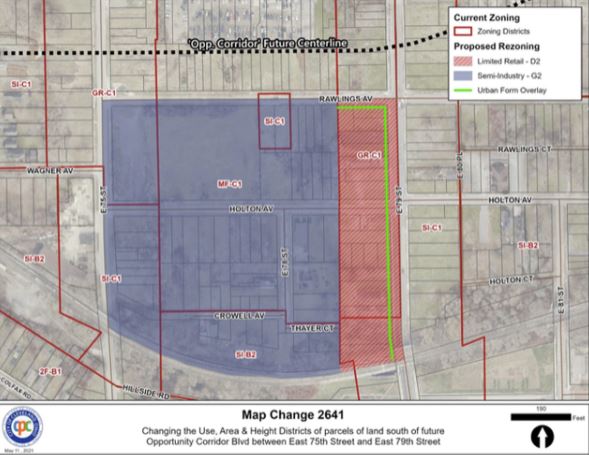 CLEVELAND, Ohio — The Cleveland City Planning Commission on Friday unanimously approved rezoning a large parcel along the future Opportunity Corridor to accommodate a proposed cold storage facility designed to serve a cluster of food-related businesses nearby.

Officials from the administration of Mayor Frank Jackson, who requested the zoning change, described the cold storage facility as part of a plan established in 2017, with strong community support.

Yet as members of the planning commission pointed out, the rezoning, and the purpose behind it, contrasted sharply with the administration’s controversial proposal to place a construction training institute with concrete and asphalt plants on an adjacent parcel east of East 79th Street and south of the future boulevard.

The brainchild of Norm Edwards, an ally of the mayor and head of the Black Contractors Group, and an associate, Fred Perkins, the nonprofit institute would train women and minority workers underrepresented in Greater Cleveland’s construction industry.

On Friday, cleveland.com and The Plain Dealer reported that Councilmen Kevin Kelley, Blaine Griffin and Anthony Brancatelli questioned whether the Opportunity Corridor is the best location for the project. They praised the concept but suggested the facility should be located elsewhere.

Members of the planning commission echoed those concerns.

“I want to put everybody on notice that this has to be a point of discussion, or else we just got the state to build a fancy road that nobody’s going to want to locate on,’’ said Ward 17 Councilman Charles Slife.

The Jackson administration did not respond to a request for comment by 6 p.m. Friday.

The boulevard is a three-mile, $306 million project largely funded through bonds backed by Ohio Turnpike tolls that will connect I-490 at East 55th Street to East 105th Street in University Circle. Traversing some of the city’s most economically devastated neighborhoods, it is designed to stimulate investment and redevelopment.

Slife said that “as a former site selector that specialized in the food industry,’’ he had serious concerns about placing an asphalt and a concrete plant anywhere near food-related businesses.

“Concrete and asphalt create fumes, they create dust; the food industry is incredibly sensitive to all of those,’’ he said. “We already have successful food processors in the immediate vicinity. We don’t want to jeopardize them.”

Commission member Lillian Kuri said that the city would not be in the position of having to consider locating the concrete and asphalt plants in Opportunity Corridor if the administration had moved more quickly to rezone the area following its 2017 plan.

“We do a lot of planning in the city and a lot of planning has happened on Opportunity Corridor, but we don’t follow through with the zoning,’’ she said. She described her vote in favor of the rezoning for the cold storage facility and related development as a way to build a stronger case against having the construction institute nearby.

The 2017 plan completed by the city showed that 70 acres assembled along the boulevard route near East 79th Street could accommodate 4.6 million to 9.1 million square feet of development. 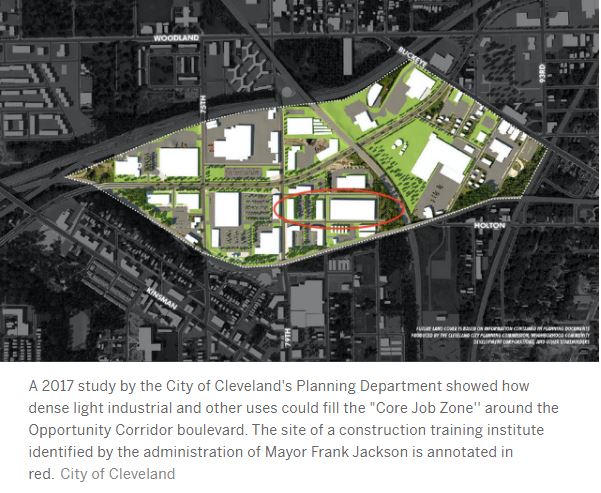 At Friday’s online meeting, planner Shannan Leonard described the rezoning sought by the administration as a way to support the city’s work in 2017.

The parcels in question, bounded by Rawlings Avenue on the north, East 75th Street on the west, East 79th Street on the east, and a railroad line on the south, would change from multi-family and general retail to semi-industry.

A strip of land along East 79th Street would be rezoned as limited retail. There, she said, the city envisions a dense urban development with buildings rising three- to five stories high, housing retail, business, and commercial uses.

“This will create a vibrant pedestrian experience as a gateway to the neighborhood,’’ she said, emphasizing the city’s desire to create a walk-to-work or ride-to-work environment close to nearby rapid transit stations.

Yet the dense urban development she described would face the construction institute across East 79th Street between Rawlings and Holton avenues, with the concrete and asphalt plants located to the east.

The rezoning approved in a 5-0 vote by the planning commission Friday next goes to City Council for legislative approval.