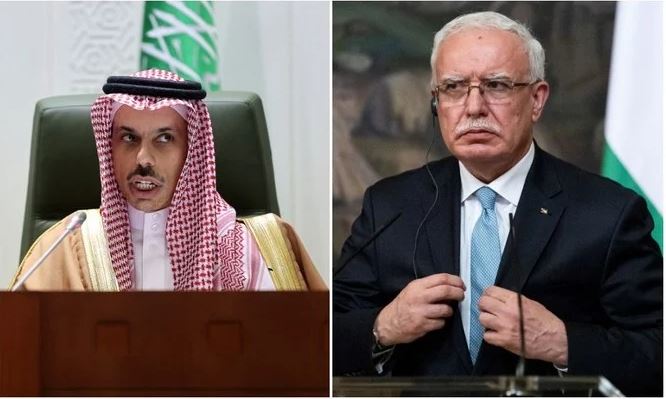 RIYADH: Saudi Arabia’s foreign minister spoke to the Palestinian Authority’s Ministry of Foreign Affairs and Expatriates Riyad Al-Maliki on the phone on Friday.

During the call, Prince Faisal bin Farhan affirmed the Kingdom’s condemnation of illegal practices carried out by Israeli authorities, and the need to immediately stop the country’s escalatory actions that violate all international norms and conventions.

Prince Faisal called for the completion of efforts aimed at finding a just and comprehensive solution to the Palestinian issue which would enable the Palestinian people to establish an independent Palestinian state on the 1967 borders, with East Jerusalem as its capital, and in accordance with international legitimacy decisions and the Arab Peace Initiative.

Meanwhile, Jordan’s foreign minister said he had discussed with Prince Faisal targeted efforts to “stop the Israeli aggression on Gaza and the attacks in Jerusalem and the rest of the Palestinian territories,” as a means of ending the current escalation.

“Occupation is the basis of the conflict, and launching an effective political movement to end it is a priority that we are working on with our brothers and partners,” Ayman Safadi tweeted.

Safadi also spoke to his Omani and Egyptian counterparts regarding the escalation in “occupied Palestinian Territories.”

The foreign minister also discussed the conflict between Gaza and Israel with his Sudanese counterpart Mariam Al-Sadiq Al-Mahdi.