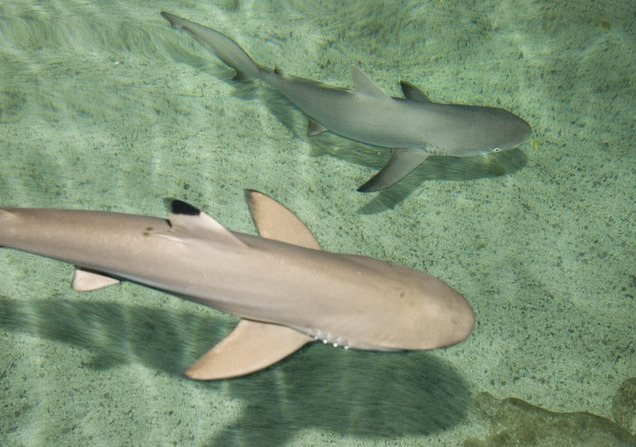 Baby sharks are being born smaller, undernourished and exhausted as climate change warms the world’s oceans, researchers say.
Researchers examined the effects of warming temperatures on the growth, development and physiology of the Great Barrier Reef’s epaulette sharks off Australia, testing embryos and hatchlings in waters up to 31 degrees Celsius (87.8 degrees Fahrenheit).

The research team found that in warmer waters, shark embryos grew faster and used their yolk sac — their only source of food in this developmental stage — quicker. The creatures hatched earlier, were born smaller and needed to feed straight away, but lacked energy, researchers from Australia’s ARC Centre of Excellence for Coral Reef Studies at James Cook University and the University of Massachusetts said Tuesday.

There are more than 500 types of shark living around the world, and the majority give birth to live young. Some shark species, like
epaulette sharks, lay eggs, which are left unprotected and must be able to survive on their own for up to four months.
“The epaulette shark is known for its resilience to change, even to ocean acidification,” Jodie Rummer, co-author and associate professor at the ARC Centre of Excellence for Coral Reef Studies, said in a statement. “So, if this species can’t cope with warming waters, then how
will other, less tolerant species fare”.

The Great Barrier Reef is the world’s largest coral reef, covering nearly 133,000 square miles, and is home to more than 1,500 species of fish, 411 species of hard corals and dozens of other species.
The past decade has been the warmest on record for global ocean temperatures. By the end of the century, the Great Barrier Reef is likely to experience average summer temperatures close to or exceeding 31 degrees Celsius, researchers warn.