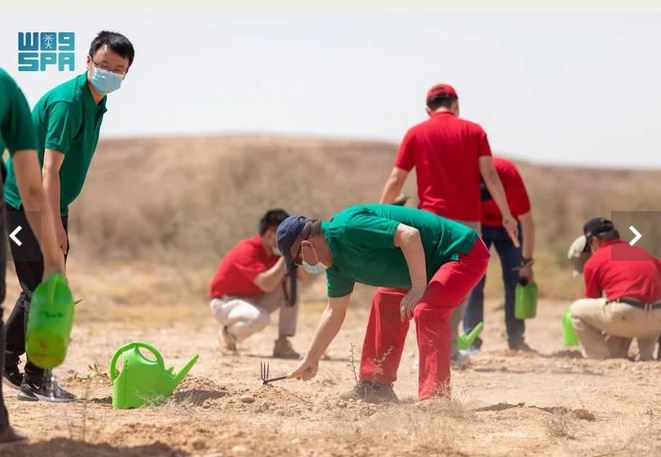 HURAYMILA: Chinese Ambassador to Saudi Arabia Chen Weiqing and representatives of Saudi-based Chinese companies on Wednesday took part in the afforestation campaign of Huraymila National Park, supervised by the National Center for the Development of Vegetation Cover and Combating Desertification.

The ambassador was received by the CEO of the center, Dr. Khaled Al-Abdulqader.

Saudi Arabia and China are pioneers in the field of environmental protection, he said.

Al-Abdulqader said the visit comes within a series of efforts by the center to spread awareness on the importance of sustainable afforestation, promote practices contributing to preserving and developing the plant cover, maintain the environmental balance, reduce desertification effects and cooperate with relevant authorities to achieve afforestation objectives.

Al-Abdulqader added that the visit supports the afforestation process, which has been very well received both locally and internationally and has witnessed the participation of 45 embassies and diplomatic missions in planting trees at the National Huraymila Park.

The Kingdom has adopted a grand vision to address climate change and environmental protection on the local and regional levels, through the “Green Saudi” and “Green Middle East” initiatives.

The center recently announced that its “Let’s Make it Green” initiative, which aimed to plant 10 million trees in 1,247 sites across the Kingdom in the past six months, has been successfully completed.