The diversity chief at the Department of Defense said, ‘If another Karen tells me about her feelings… I might lose it’

A diversity chief at the Department of Defense’s education wing went dark on social media after Fox News Digital found that she posted disparaging posts about White people on Twitter.

Wing’s Twitter account was put on private and her LinkedIn account appeared to be deleted. Fox News Digital previously downloaded a copy of her account profile. It indicated she worked at the DoD for 16 years and was promoted as DEI chief in December 2021.
“[T]his lady actually had the CAUdacity to say that black people can be racist too… I had to stop the session and give Karen the BUSINESS… [W]e are not the majority, we don’t have power,” she continued. “Caudacity” is a slang term that is used to describe audacity demonstrated by White people.

On another occasion, Wing responded to a user who said, “I am exhausted by 99% of the white men in education and 95% of the white women. Where can I get a break from white nonsense for a while?”

Wing responded, “If another Karen tells me about her feelings… I might lose it…” Wing has also referred to former President Donald Trump as the “whole boy version of a Karen” and former secretary of education Betsy DeVos as “the queen of Karens.” When Wing was promoted to chief in December 2021, the DoD said Wing “has been involved with diversity, equity and inclusion efforts for… schools over many years, authoring several books on the topic.” Wing — who oversees curriculum at DoDEA, according to a press release — has co-created children’s books on defunding the police, Black Lives Matter and White privilege.

“White privilege hurts a lot of people. If you are White you might feel bad about hurting others or you might feel afraid to lose this privilege,” the book “What is White Privilege?” said. It added that White people must confess their privilege and were de facto hurting Black people by being benefactors of unearned advantages.

It said that, “Overcoming White privilege is a job that must start with the White community.”

“[W]ill you really feel good at the end of the race when you look back and see others fighting obstacles that you didn’t even have?” the book added. 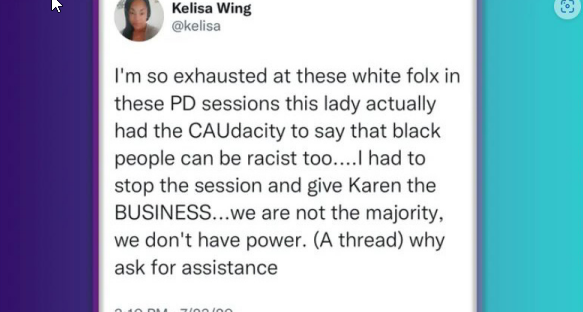