Russia has resumed pumping gas to Europe through its biggest pipeline after warnings it could curb or halt supplies altogether.

The Nord Stream 1 pipeline restarted following a 10-day maintenance break but at a reduced level.

On Wednesday, the European Commission urged countries to cut gas use by 15% over the next seven months in case Russia switched off Europe’s supply.

Russia supplied Europe with 40% of its natural gas last year.

Germany was the continent’s largest importer in 2020, but has reduced its dependence on Russian gas from 55% to 35%. Eventually, it wants to stop using gas from Russia altogether.

Russia’s President Vladimir Putin has sought to play down fears, telling reporters that state gas firm Gazprom would fulfil all its contractual obligations.

The pipeline resumed operations early on Thursday, but a spokesman said it was only delivering 40% of its capacity.

This is the same level it was operating at in mid-June, when Gazprom cut gas flows blaming a delay in the return of equipment being serviced by Germany’s Siemens Energy.

The gas is flowing again – but at a reduced capacity.

Few in Berlin, or any other European capital, trust Vladimir Putin to supply the energy upon which Germany, in particular, depends so heavily.

Even as Europe swelters through a heatwave, ministers here are painfully aware that the country doesn’t currently have enough stored gas to see it through the winter.

They’re urging people to save energy, scrambling to secure supplies of liquified natural gas (LNG) from other countries and even firing up old coal power stations – despite a pledge to phase out the fossil fuel.

Industry leaders have warned that a shortfall in gas, which may yet lead to rationing, could trigger a recession.

That would delight Vladimir Putin, who wants to provoke political and economic chaos in the West.

Gazprom cut the flow of gas through Nord Stream 1 to 40% of capacity in mid-June, blaming the delayed return – due to sanctions – of a key piece of equipment which had been serviced in Canada.

Now back at only 40% capacity after a 10-day break, the continued cut in supply is likely to make it more difficult for countries to replenish their stores before winter, when gas usage is much higher.

European countries have been looking for alternative suppliers of gas, for example LNG from the US, which can be transported by ship.

But building the infrastructure needed to import gas from new suppliers can be expensive and time consuming, which makes it unlikely that Russian gas can be replaced completely before the coming winter.

Instead, it may be necessary to cut gas consumption, and on Wednesday the EU Commission President, Ursula von der Leyen, announced a voluntary target for all EU countries to reduced their gas use by 15%.

In late February, in response to Russia’s invasion of Ukraine, Germany abruptly halted plans to reopen a new pipeline – Nord Stream 2 – which would double the supply of Russian gas to Germany.

Critics of the Nord Stream 2 project had long argued that it would give Russia too much control over Europe’s energy supply. 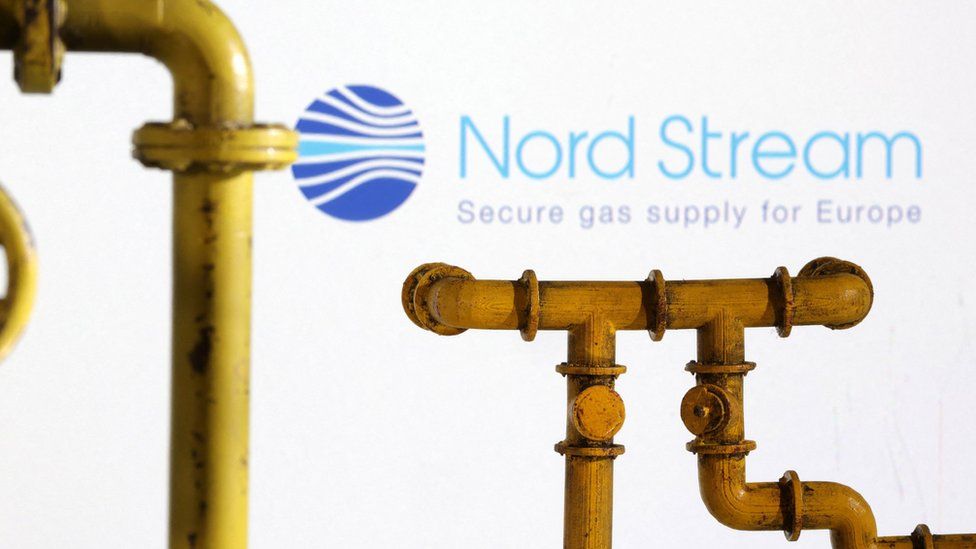