Singapore’s prime minister-in-waiting warned that House Speaker Nancy Pelosi’s trip to Taiwan had put the U.S.- China relationship on a ‘very worrying’ trajectory and warned the two nations may ‘sleepwalk into conflict’ if neither
side takes action to deescalate.

‘Following the visit, tensions have gone up one notch,’ Lawrence Wong said in an interview with Bloomberg. ‘And that’s the risk that can happen, that we’re starting to see a series of decisions being taken by both countries that will lead us to more dangerous territory.’

Wong is the current deputy prime minister and finance minister. He expressed concern over potential conflict in the Taiwan Strait or the South China Sea, where China has been ramping up its military drills.

He warned that there could be ‘accidents’ with both sides displaying a show of force in the region, citing a 2001 incident where an American spy plane collided with a Chinese jet and was forced to make an emergency landing on China’s Hainan Island. China released the crew after the U.S. apologized.
Pelosi and a congressional delegation of Democrats visited Taiwan two weeks ago despite fiery warnings from the Chinese Communist Party (CCP), which viewed the visit as the U.S. interfering with their territory. Beijing threatened retaliation, warning of the visit: ‘Those who play with fire get burned.’ Pelosi had visited Singapore before her stop in Taiwan during an Asian tour.

The speaker was the highest-level U.S. government official to visit Taiwan in 25 years, and China considered her visit an affront by the Biden administration. President Biden’s White House did not support the trip.
‘As they say, no one deliberately wants to go into battle, but we sleepwalk into conflict,’ Wong said. ‘And that’s the biggest problem and danger.’
Since Pelosi and her crew have returned, a second delegation of members of Congress led by Sen. Ed Markey, D-Conn., has traveled to Taiwan.
Joining Markey in the small delegation are Democratic Representatives Alan Lowenthal and John Garamendi of California and Don Beyer of Virginia along with Republican Delegate to American Samoa Aumua Amata.
In Taipei, the chair of the legislature’s Foreign and National Defense Committee, Lo, Chih-Cheng, met with the U.S. lawmakers and stated that, ‘Their visit at this time is of great significance, because the Chinese military exercise is (intended) to deter U.S. congressmen from visiting Taiwan.’
‘Their visit this time proves that China cannot stop politicians from any country to visit Taiwan, and it also conveys an important message that the American people stand with the Taiwanese people,’ Lo said.

China has said that it wants to use peaceful means to bring Taiwan back under is control but that all options are ‘on the table’ for doing so.
Beijing has since sent missiles, warships and warplanes into the seas and air around Taiwan.
Last week Taiwanese officials claimed China sent 17 fighter jets across the median line in the Taiwan Strait. Both sides have understood for
decades that crossing the median line would mean serious escalation. Taiwan too launched its own anti-invasion drills last week.

Meanwhile on Tuesday it was reported the U.S. successfully carried out a test of a Minuteman III intercontinental ballistic missile, which had been delayed to avoid escalating tensions with Beijing during China’s show of force near Taiwan earlier this month.
The test showed ‘the readiness of US nuclear forces and provide confidence in the lethality and effectiveness of the nation’s nuclear deterrent,’ Air Force Global Strike Command said following the launch early on Tuesday.
The Minuteman III’s re-entry vehicle traveled 4,200 miles from Vandenberg Space Force Base near Santa Barbara, California to Kwajalein Atoll in the Marshall Islands, officials confirmed.
Intercontinental ballistic missiles can have a range of up to 9,300 miles – and are primarily designed for the delivery of nuclear weapons. They were first deployed in the US in 1959, and have become a crucial weapon in America’s nuclear arsenal.

Last week Pelosi defended her trip amid criticism.
‘We will not allow China to isolate Taiwan,’ Pelosi said at a news conference, flanked by members of the congressional delegation she brought with her.
‘They’re not keeping us from going to Taiwan …That was our purpose, to salute this thriving democracy.’
‘They say we’re trying to upset – no, the Taiwan Relations Act of 1979 … established the terms of our relationship.’
‘There’s no departure from that,’ she added.
The Taiwan Relations Act began the U.S.’s policy of strategic ambiguity, establishing an unofficial diplomatic and economic pathway between the U.S. and Taiwan. It acknowledged China’s ‘One China principle’ but neither supported nor criticized it. The U.S. has not publicly said whether it would come to Taiwan’s aid if China invaded, but has urged the PRC against doing so.
Pelosi also told reporters that she doesn’t ‘remember’ the military telling her not to go to Taiwan. Ahead of the trip, Biden told reporters ‘The military thinks it’s not a good idea.’ 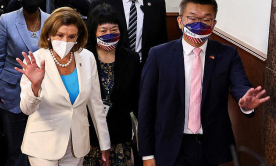 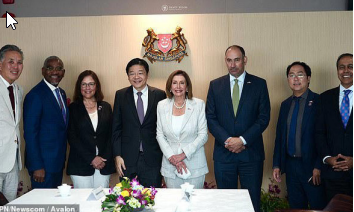