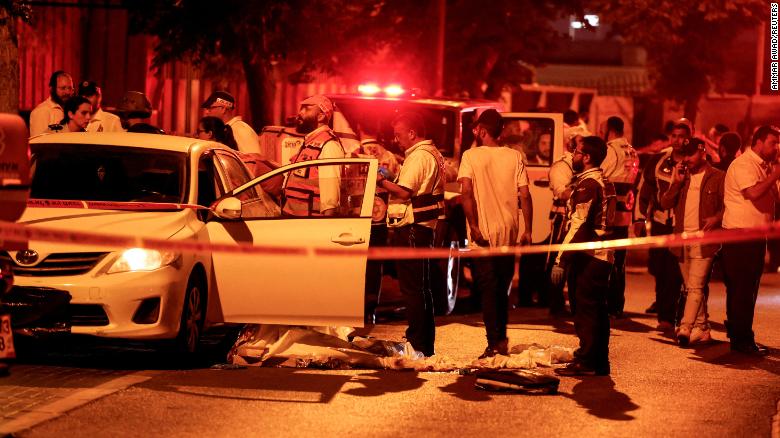 Police had previously identified the suspects as Assad Yussef Assad Al-Rafa’i, 19, and Subhi Imad Subhi Abu Shakir, 20.
They are both residents of the village of Romana in Jenin province, according to a police statement Friday.
The arrests came after a manhunt involving helicopters, road blocks and vehicle checkpoints.
The three men killed in the attack died at the scene and were buried Friday following a huge funeral procession, the Israeli rescue service Zaka Tel Aviv said.
The Magen David Adom (MDA) emergency service named them as Oren Ben Yiftach, a father of six; Yonatan Habakkuk, a father of five; and Boaz Gol, a father of five. All were in their 40s, the MDA said earlier.
Three men injured in the attack are now in stable condition, the hospitals treating them said Sunday.
The two patients at Beilinson Hospital are ventilated and anesthetized, the medical center said, describing their condition as “serious but stable.” There is no change in the status of the injured 20-year-old at the Sheba medical center, the hospital said, saying he was “stable but critical with severe head injuries from an axe.”
Elad, where the attack took place, is a quiet, small and largely religious city in central Israel not far from Ben Gurion International airport.
The attack marked the latest in a series of violent incidents that have put Israel and the Palestinian territories on edge in recent weeks. 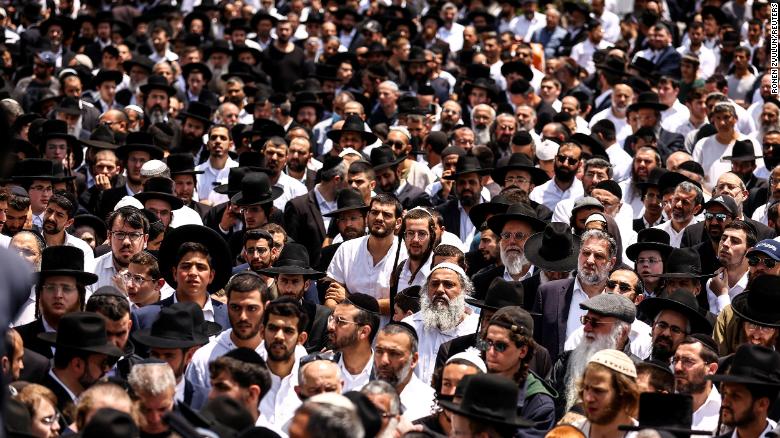 Israelis take part in the funeral service of Yonatan Havakuk and Boaz Gol who were killed in the attack.
Dozens have died in the violence in Israel and the West Bank since March 22, according to a CNN count.
In a statement, Prime Minister Naftali Bennett condemned Thursday’s attack, and offered his condolences to the families affected.
“Our enemies have embarked on a murderous campaign against Jews wherever they are. Their goal is to break our spirit; but they will fail. We will get our hands on the terrorists and their supportive environment, and ensure they pay the price,” Bennett said in the statement.
Israel confirmed it will keep Gaza and the West Bank sealed at least through Monday following the attack, extending closures already in place for Israeli holidays.
The Israeli Defense Forces said Palestinians living in those territories would only be allowed to enter Israel with prior permission on a humanitarian basis, under special circumstances or for medical reasons.
Palestinian Authority President Mahmoud Abbas also condemned Thursday’s violence, his office said in a statement.
“The killing of Palestinian and Israeli civilians only leads to a further deterioration of the situation at a time when we all strive to achieve stability and prevent escalation,” Abbas said in the statement.
Abbas warned against Jewish settlers using the incident as an excuse “to carry out attacks and reactions against our Palestinian people.” 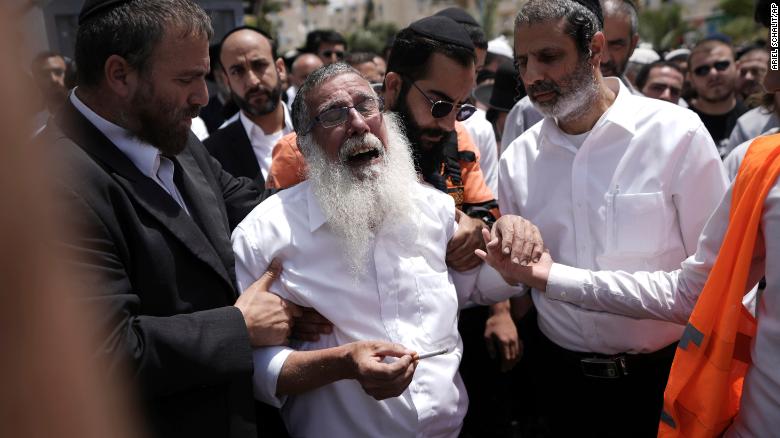 Ultra-Orthodox Jewish mourners encircle a man overcome with grief following the attack.
He added that the “lasting, comprehensive and just peace is the shortest and best way to provide security and stability for the Palestinian and Israeli peoples and the peoples of the region.”
Late Thursday, Palestinian militant groups in Gaza, Hamas and Islamic Jihad, praised the suspected terror attack, without explicitly taking credit for it.
Hamas spokesman Fawzi Barhoum linked the attack to clashes at Jerusalem’s al Aqsa mosque compound.
Only Muslims are allowed to visit the holy site, called the Temple Mount by Jews and Haram al-Sharif or Noble Sanctuary by Muslims, during the last 10 days of Ramadan each year. Groups of Israeli Jews began visiting again on Thursday.