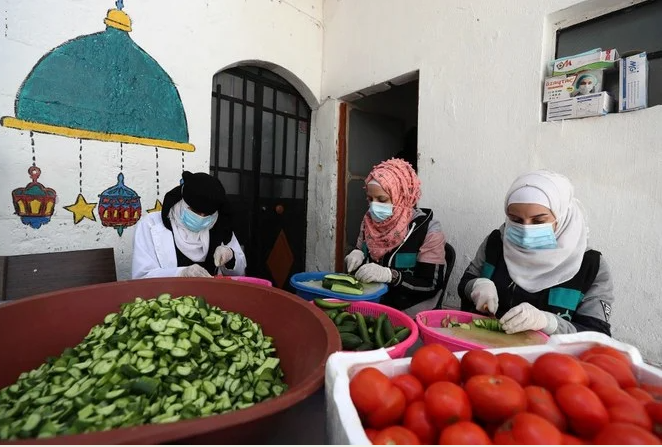 LONDON: The UK government’s decision to cut foreign aid spending will leave 55,000 women and girls without access to shelters to escape domestic abuse in Syria, according to the International Rescue Committee (IRC).

The group said its funding from the UK for its programs in the war-torn country could be reduced by as much as 75 percent, effectively ending its schemes to help Syrians regain economic self-sufficiency following a decade of conflict. Those set to lose most from this, it added, will be women.

Su’ad Jarbawi, the IRC’s regional vice president for the Middle East and North Africa, told The Independent: “The humanitarian situation in the country is rapidly deteriorating as Covid cases rise and people face a serious hunger crisis. Syrians need certainty and support. These cuts will lead only to suffering and misery.”

The UK set out plans earlier this year to reduce its foreign aid budget from 0.7 percent of gross domestic product to 0.5 percent — around £4 billion ($5.6 billion) — in light of the effects of the coronavirus pandemic on the economy. The move has drawn sharp criticism at home and from the international community.

The UK Foreign, Commonwealth & Development Office said the cuts are only a “temporary measure.”

But at least 30 Conservative MPs, as well as former Conservative Prime Minister Sir John Major, have called on the Conservative government not to push ahead with the decision.

The countries set to lose most from the UK aid cuts include Syria, Libya, Yemen and Lebanon.

The IRC also warned that cuts to its funding could end up affecting its health programs in Syria, with as many as 300,000 people relying on it to provide primary healthcare and mental health support.

Reem Khassab, a teacher in Idlib province, told The Independent: “The economic struggle for Syrian women has drastically worsened in the past months due to currency inflation, prices surge and other factors.”

She added: “Gender-based violence is still a major problem that needs more attention and support to alleviate women’s struggles socially and economically.”

Nour Mashhade, a Syrian journalist based in the Turkish city of Gaziantep, said: “The cuts will only socially and economically disempower women further and add more pressure on Syrian women to battle for rights and equality.”