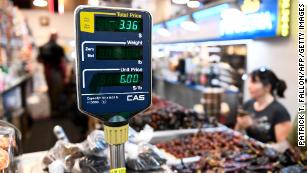 The annual inflation rate climbed to 7.0% in March from 6.2% in February, its highest since March 1992 and by more than expected by most economists in a Reuters poll, official data showed on Wednesday.
The month-on-month rise was the highest for the time of year since the Office for National Statistics’ records began in 1988. Broad-based price rises, ranging from vehicle fuel to food and furniture, were behind the increase.
Households are facing the biggest cost-of-living squeeze since records began in the 1950s, according to Britain’s budget forecasters, and the inflation overshoot is further bad news for the government too.
Johnson and Sunak were fined by police on Tuesday for attending a June 2020 birthday party for Johnson at his Downing Street office at a time of COVID-19 restrictions, leading to calls from political opponents for them to resign.
Sunak — previously seen as a leading candidate to succeed Johnson as prime minister — has seen his popularity slide after a budget statement in March, which the public judged did too little to ease cost-of-living pressures.
“I know this is a worrying time for many families which is why we are taking action to ease the burdens by providing support worth around 22 billion pounds ($29 billion) in this financial year,” Sunak said after the data.
Jack Leslie, senior economist at the Resolution Foundation think tank, said Sunak would come under pressure to do more.
“The sheer scale of this inflation-led squeeze on living standards makes it all the more remarkable how little support the Chancellor provided in his Spring Statement — a decision that will surely have to be revisited before the Autumn Budget,” Leslie said.
British inflation has seen an unprecedented rise over the past year, following a similar pattern to most other advanced economies as energy prices surged and pandemic supply-chain difficulties persisted.
Russia’s invasion of Ukraine on Feb. 24 has pushed energy prices even higher, and last month Britain’s Office for Budget Responsibility forecast inflation would peak at a 40-year high of 8.7% in the final quarter of 2022.

Financial markets are all but certain the Bank of England will raise interest rates to 1% from 0.75% on May 5 before taking them to 2%-2.25% by the end of 2022, though many economists expect it to be less aggressive.
The BoE forecasts economic growth will slow sharply over the course of this year as cost of living pressures mount.
Samuel Tombs, chief UK economist with Pantheon Macroeconomics, forecast inflation will hit 8.8% in April after household utility bills rocketed but then fall below the BoE’s 2% target in the second half of next year.
Wednesday’s data showed that core CPI, which excludes food, energy, alcohol and tobacco prices, rose to 5.7% in March from 5.2% in February.
Retail price inflation — an older measure which the ONS says is inaccurate, but which is widely used in commercial contracts and to set interest payments on inflation-linked government bonds — rose to 9.0%, its highest since 1991.
There were signs of further inflation pressure ahead as manufacturers increased their prices by 11.9% over the 12 months to March, the biggest jump since September 2008.
Manufacturers’ raw material costs leaped by 19.2%, the biggest increase in records began in 1997.