Marie Kossaifi has been trying to pay her son’s traffic ticket since March. First, there was no electricity at the post office to process the payments. When she returned, the post office had run out of stamps to officialise the transaction.

So, she ran out of time and her only option was to pay the fine in court ― but she couldn’t, because judges were on an open strike, joining other public servants in demanding higher wages and better working conditions.

“Who can keep up with all the strikes?” she said, upon being turned away from Beirut’s Justice Palace, the seat of Lebanon’s Supreme Court and local courts.

Since mid-August, 400 out of around 600 judges – some from the nation’s highest courts – have suspended all judicial work, including for urgent judiciary matters.

They are demanding a pay rise, better working conditions and guarantees of judicial independence.

The latter demand follows claims of attempted political interference in the appointment of judges to the Supreme Council, a body charged with prosecuting ministers and MPs.

Judges have joined teachers, state telecoms employees and other civil servants who walked out two months ago over pay and conditions.

The country’s economic crisis has seen the value of the Lebanese pound drop by over 95 per cent since 2019. More than two-thirds of the country’s population has pushed into poverty, while the World Food Programme says half the population suffers from food insecurity.

It’s not just traffic tickets that are affected by the strike.

“Some courts are completely closed,” said Faysal Makki, president of the Judges’ Club — a union-like federation for the profession.

Lawyer Diala Chehade told The National that the closure of courts has left hundreds in detention awaiting hearings, and suspended the cases of bank depositors suing to access their life savings.

It has also left victims of domestic violence unable to get restraining orders against abusive partners.

Those left waiting for justice

Sarah, not her real name, has been left waiting after seeking a court order against her violent former partner.

“I made a complaint at the police station when he attacked me. They couldn’t do much,” she said.

“Then we raised a lawsuit requesting a protection order from the court … of course, now the judges are on strike and [the request is] on hold.”

For now, she said she has changed the locks on her front door. It is all she can do until courts resume.

“I have no protection at all. My kids are in danger every minute,” she said.

Sarah is not alone. Leila Awada, co-founder of anti-gender-based violence organisation Kafa, said that police have limited powers without a court order. She said they are overwhelmed and unable to press cases on behalf of victims.

“We are dealing with an emergency case now where the abuser took the child from the mother and left,” she said. “The judges are on strike and there’s no one in the civil court to give the order to release the child back into the mother’s care.

“In the meantime, who knows where the father is or if he’s even in the country?”

Why judges walked out

Around 200 judges are still trying to keep the system going, but several told The National that the judicial process was barely moving even before the strike.

The Justice Palace rarely has electricity, as the state can only supply the country with a few hours of power a day.

Piles of rubbish lie in the corners of the imposing marble-tiled main hall. The few visitors inside use the light on their phones to navigate darkened toilets and climb staircases as the lifts don’t work.

The few court hearings that are taking place do so without air-conditioning, despite the humid summer days.

And those in the courts can often hear the chants of demonstrators outside, protesting about one or other of Lebanon’s many crises and judicial stalemates.

Some call for action over the stalled investigation into the massive blast in Beirut port on August 4, 2020. Around 218 people were killed, 7,000 injured and about 300,000 left homeless after hundreds of tonnes of ammonium nitrate exploded when a fire tore through the warehouse where it was stored. No senior official has been brought to account.

Other times, it is people demanding that Central Bank Governor Riad Salameh be brought to face charges against him   for illegal enrichment and money laundering.

Or it is judicial employees outside, protesting over work conditions.

He added that judges are expected to pay out of their own pocket for supplies.

Judges’ salaries worth $200 a month

Public sector workers are paid in Lebanese pounds that were officially valued at around 1,507 to the US dollar before the crisis.  However, since 2019 the banks have limited withdrawals and the government has imposed currency restrictions.

The unofficial collapse of the price of the dollar has left even those in once well-paid public sector jobs destitute.

Before the crisis, Mr Makki’s salary as a mid-level judge, paid in Lebanese pounds, was equivalent to $4,000 a month.

More junior judges are paid the equivalent of $100 a month.

Meanwhile, prices have kept pace with the dollar, pushing even basic goods beyond the spending power of ordinary people.

Petrol prices have rendered the drive to work a financial liability for many. Private generators to keep lights on during the long blackouts are too expensive. The cost of private school fees and imported goods has rocketed.

Judge Ghada Aoun, a prominent state prosecutor with more than 40 years of experience, said she makes around $250 a month.

“To give you an idea, my generator alone costs five million Lebanese pounds [the equivalent of around $160] and I spent around $60 at the supermarket,” she said.

“And that was my whole salary. How am I supposed to eat or drink and live my life and pay for petrol, never mind work?”

Caretaker Minister of Justice Henry El Khoury has attempted to mediate a solution, but there is no resolution in sight.

“We’ve received promises, but so far, it’s all talk. No practical solutions have been offered,” Mr Makki said.

One government proposal was to offer a grant to boost salaries for six months. Judges, Mr Makki said, rejected the proposal.

“It’s a temporary fix and it’s not enough,” he said.

But Ms Aoun ― and other judges ― say they are conscious of the impact their walkout has on ordinary people. While she’s stopped almost all work, she still processes the most urgent cases.

Mr Makki also points out that even without a strike the judiciary was struggling.

“We are already unable to do our work properly. There is a government that is supposed to be responsible for the public sector. They need to administer the country so we can proceed with our jobs,” he said. 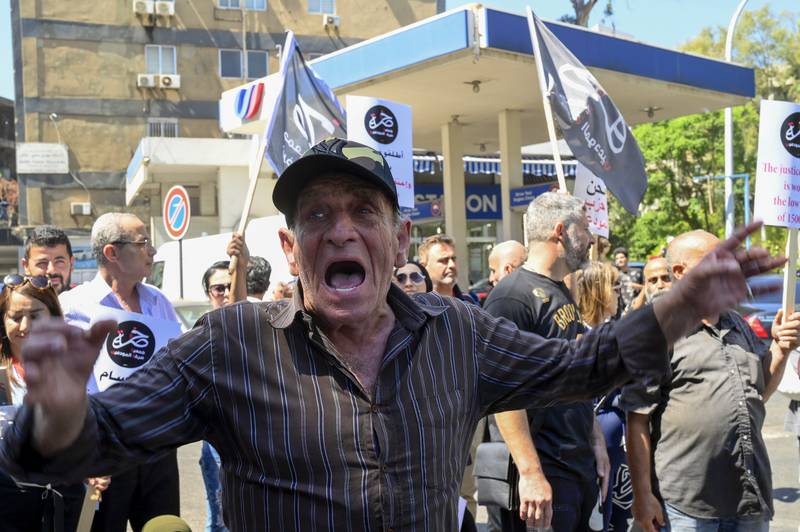