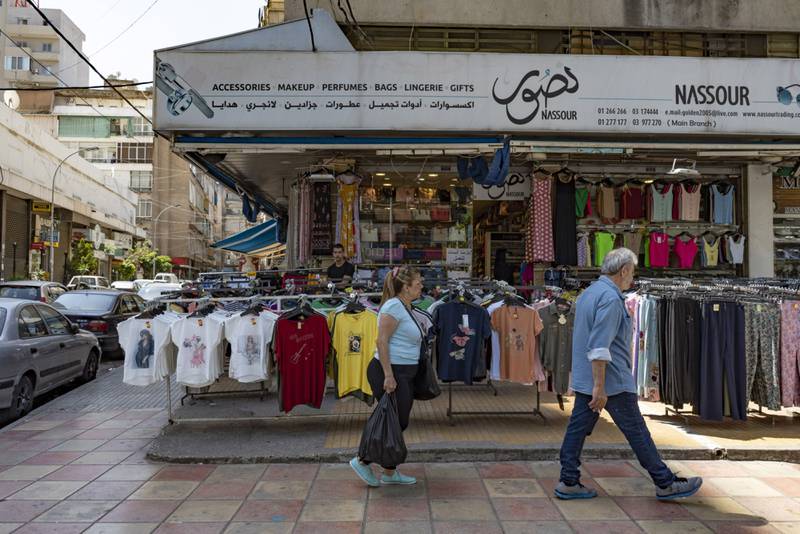 Lebanon’s private sector economy deteriorated in May to the weakest extent since the beginning of 2016, according to the latest reading from the Blom Lebanon Purchasing Managers’ Index.

The index, however, continues to remain in contraction territory, signalling a deterioration in private sector business conditions across Lebanon.

A reading above the neutral level of 50 indicates growth, while one below this figure points to a contraction.

“Lebanon is still struggling with a deep financial crisis despite the latest notable improvement in the PMI,” said Fadi Osseiran, general manager at Blominvest Bank.

“The month of May 2022 witnessed a relative increase in purchasing activity for the first time over six years,” Mr Osseiran said.

“What we can say about this increase is that despite the continuous deterioration of the national currency against the dollar, it may be, however, an interesting indicator that Lebanese citizens have resigned themselves to the fact that most of their products are priced in US dollar, which is ‘psychologically’ facilitating the purchasing operations and increasing its volumes.” 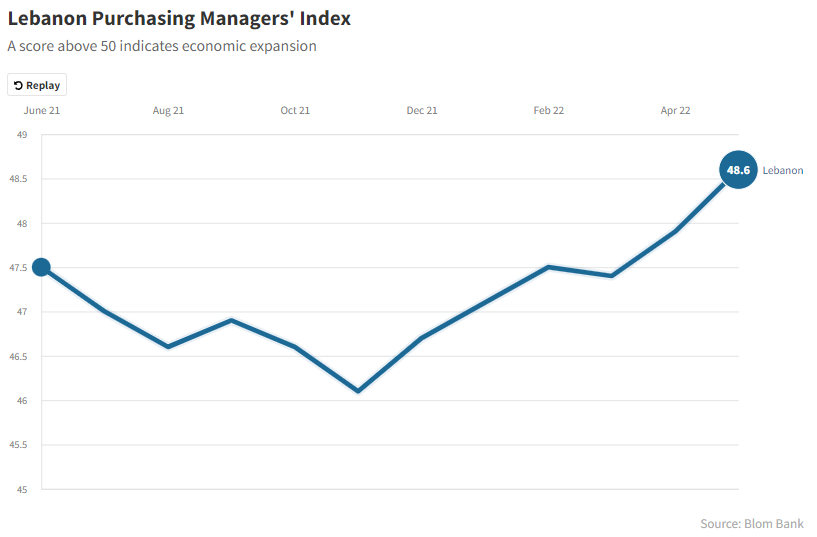 The depression is among the worst economic collapses globally since the 1850s, the World Bank said in January. It is the largest contraction on a list of 193 countries.

The country’s economy went into a tailspin after the government defaulted on about $31bn of Eurobonds in March 2020, with its currency sinking more than 90 per cent against the dollar on the black market.

In April, the International Monetary Fund approved a $3bn funding package as part of a four-year deal for the country. However, Lebanon will have to undertake a list of social, economic and financial reforms before the Washington-based lender’s board approves the facility.

Once the IMF programme is in place, Lebanon’s government will need to make other changes that include a single exchange rate and capital controls, reforming state-owned enterprises, and strengthening governance and fiscal reforms.

The latest PMI data indicates a drop in business activity among Lebanese companies amid challenging economic and political conditions. Exports, as well as intake of new work, also fell owing to lower demand, according to the surveyed firms. Businesses reduced staff because of the lack of new work.

The data highlighted continued inflationary trends across Lebanon in May amid exchange rate pressure. Inflation in the country reached 206 per cent in April, compared to the same period a year earlier.

While output and new orders fell at slowest pace since January 2016, overall input costs last month rose at the sharpest pace in 10 months amid an accelerated increase in purchase prices.

For the first time in more than six years, businesses increased their purchasing activity. However, stocks of purchases were lower in May as they struggled to replenish their inventories.

“Lebanon could be entering a tough and unstable phase in its post-election period due to the heightened political uncertainty,” Mr Osseiran said.

“What complicates matters is that reform plans are in a state of limbo, pending the formation of a new government. We only hope that this ‘grey period’ does not stay long, given the severity of the economic situation.”

Lebanese citizens voted in May in the first parliamentary election since the country’s economic collapse in 2020 and the Covid-19 pandemic.

Private sector businesses in Lebanon remained “pessimistic” about improvement in business conditions over the next 12 months as the country continued to struggle owing to a lack of political and economic reforms, the PMI report said.