Plumes of thick black smoke billowed from Lebanon’s old Zouk power station this week, stoking concerns among Lebanese  as experts warned the low-quality fuel authorities were using to power the plant was a health and environmental hazard.

The Energy and Water Ministry did not comment on the danger the smoke poses to locals. But experts said the air pollution caused by burning low-grade fuel in an ageing plant could have severe health and environmental consequences.

“This black smoke contains heavy carcinogen metals, which constitute a public health hazard in the long term”, said opposition MP Najat Saliba, a chemistry professor at the American University of Beirut in Lebanon.

With the central bank’s dollar reserves dwindling, cash-strapped Lebanon is struggling to secure fuel imports for its power plants. Amid an unprecedented economic crisis, the country is facing acute power shortages, with Lebanon’s state utility Électricité du Liban (EDL) barely able to provide a few hours of electricity per day.

For the past year, the country has been exclusively relying on Iraq to keep its power plants running, under a barter agreement.

But shipments have been delayed and Prime Minister Nagib Mikati and Energy Minister Walid Fayad on Friday approved running the old plants of Zouk and Jiyyeh with 40,000 tonnes of low-quality fuel which had been stored for months.

That amount will be enough to provide vital state institutions, including the Beirut port, airport, and water stations, with a couple of hours of electricity for about a month.

As viral images of the thick smog sparked outrage on social media, the Energy and Water Ministry and EDL said in a statement on Wednesday that they were “sorry” for any environmental damage caused by the smoke and any harm to those living near the plant, saying that the move was an “exceptional decision” to avoid “total darkness”.

“The laboratory analysis showed that the fuel was not compliant with the new power plants,” MEP chief operations officer Yahiya Mawloud told The National, adding that it could have “damaged the engines, so we stored it in our tanks.”

But EDL decided to use the fuel for the two older plants, which the state company operates next to the new ones. “EDL has to perform its own test to assess the fuel compliance because the old plants have a different fuel treatment system”, Mr Mawloud said.

EDL rejected any issues with the fuel and said in a statement that it was compliant with the power plants’ specifications.

“I think it was a mistake to use the fuel; there is a reason why we rejected it,” Mr Mawloud said.

Most of Lebanon’s ageing electricity network still relies on low-quality and heavy fuel oil for energy generation. The investment in more efficient and cleaner methods of production has never been made, in a sector crippled by corruption and years of mismanagement.

“This kind of fuel should not be burnt near residential areas such as Zouk. It constitutes major health and environmental risks for the population,” Ms Saliba said. “It is the ‘trash’ of fuel, and no one wants it”, she added.

The two old plants have released hazardous air pollutants for decades. “Our research has measured 10 times more of some carcinogen pollutants in the Zouk area than in the capital,” Ms Saliba said.

EDL said the black smoke was a “technical” issue caused by the “network’s instability” after reigniting the plant’s engines.

But experts pointed out a series of shortcomings. “It looks like the appropriate protocol has not been respected, such as cleaning the turbines to get rid of the toxic particles — or preheating the fuel before sending it to the burners to make it less viscous,” said energy transition expert Charbel Moussa.

“This reaction was expected: imagine starting a very old car after a long time with inappropriate fuel. Zouk and Jiyyeh plants are operating beyond their expected lifetime and they should have been decommissioned years ago”, he added.

Pollution from the Zouk plant has long been a fact of life for residents. “As long as I can remember, I have seen dark clouds occasionally rising from the plant,” said Anthony, a 30-year-old entrepreneur, who grew up in the neighbourhood.

“We feel helpless, and it is not like we are being somehow compensated. We get as little electricity as everyone else”, Anthony said. 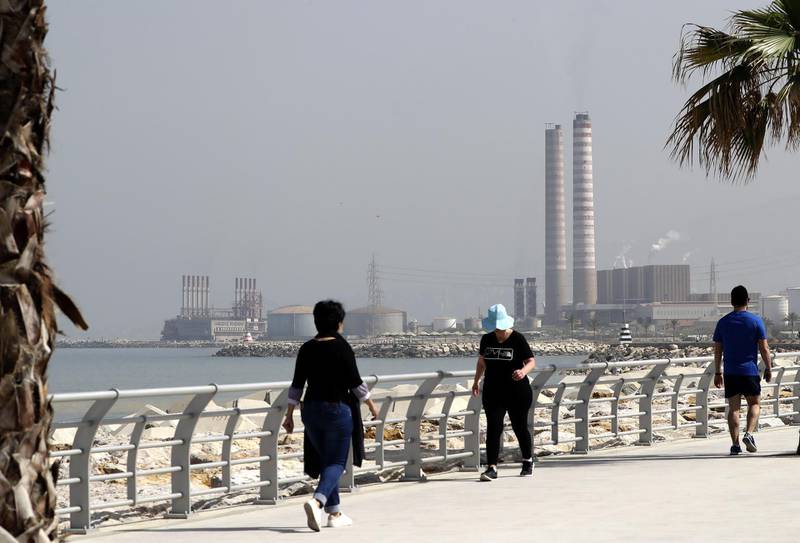