Are Iran and Hezbollah trying to stoke a new war? 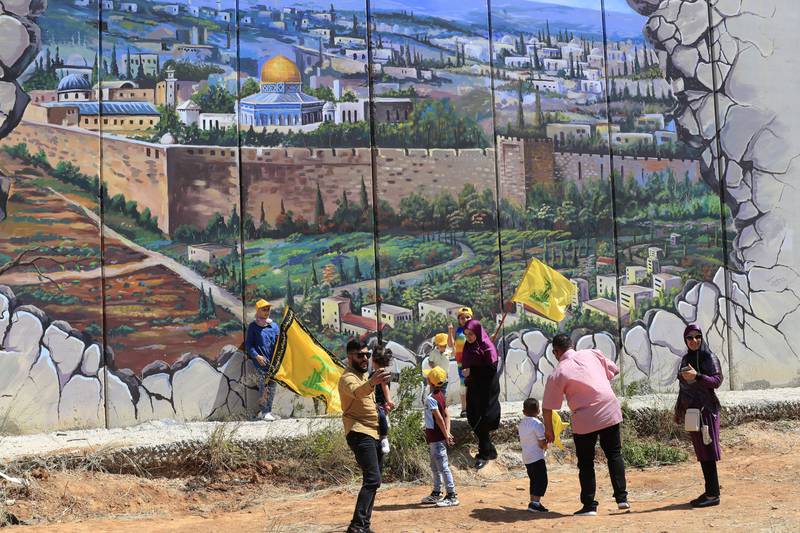 Iran and its proxies, led by Hezbollah in Lebanon, have lately been hinting at the possibility of luring Israel into a war. Hezbollah chief Hassan Nasrallah has said, were Israel to allow Jewish far-right activists to go ahead with their so-called Flag March through Muslim areas in Jerusalem’s Old City this week, there could be an “explosion” in the Middle East.

This warning has come in conjunction with the derailment of the nuclear negotiations between Iran and the five permanent members of the UN Security Council, plus Germany. The collapse reduces the possibility of a historic breakthrough in Vienna, as had been anticipated in May. One reason is said to be Israel’s success in dissuading the Biden administration from removing the Islamic Revolutionary Guard Corps (IRGC) from the US terror list, which had been one of Tehran’s preconditions in Vienna.

Meanwhile, Iranian Armed Forces chief of staff Mohammad Bagheri has vowed that the assassination of IRGC officer Col Sayad Khodai – which Tehran blames Israel for – will not go unpunished.

Hezbollah, which retains a vice-like grip over Lebanon’s political system, has warned pro-sovereignty forces within the establishment in Beirut against any attempt to block the group’s bid to effectively seize control of the country’s oil and gas resources – said to be found in the disputed marine border area with Israel. The Iranian proxy is also determined to reject any proposed talks to disarm itself – a long-contentious issue – until after a dialogue is held to agree a joint strategy to extract hydrocarbons from Lebanon’s waters.

In other words, Hezbollah intends to expand the scope of the purpose of its weaponry to guarantee its domination over Lebanon’s energy resources – as well as to cement its position in all future regional negotiations. For the group, the IRGC’s agenda holds precedence over Lebanon’s national interests.

Indeed, Nasrallah has invited the Iranian regime to be a party to oil and gas exploration in Lebanon, thereby imposing Tehran’s “resistance” agenda on negotiations and future exploration and extraction contracts. He has also bulldozed a European proposal for a comprehensive approach to “oil, gas and peace” with Israel, deciding instead that Hezbollah alone should broker and benefit from any deal with Israel when the time comes.

A proposal from Sven Koopmans, the EU Special Representative for the Middle East Peace Process, on behalf of 27 EU states, promotes negotiations for a “peace process that would resolve the energy crisis in Lebanon, allowing the Lebanese to produce electricity and exploit oil and gas resources on a sound basis”, according to pro-Hezbollah newspaper Al-Akhbar. The newspaper reported that under the proposal, Lebanon could swiftly join a consortium of regional powers – including key Arab and Mediterranean countries – which would help bring investments and revive the national economy. The proposal is also said to include special incentives for Hezbollah and “resistance” groups inside Palestine, while seeking to rebuild Gaza and invest in the city.

Remarkably, the newspaper report said that Mr Koopmans’ proposal “indicates that Europe is a key partner in besieging Lebanon and impoverishing and starving its people and driving them to immigration”, and that Europe is seeking to “split the Lebanese path from the Syrian path” in the negotiations with Israel. The report concluded that the European proposals are tantamount to a threat against Lebanon and a blackmail of the Lebanese to choose between “surrender and nutrition”.

In a speech last Wednesday, Nasrallah said that Lebanon has two options: pursue “the golden equation that protected it in the past years, and that can preserve its wealth”, or become “weak and a beggar”. As expected, he would choose the first option, which will effectively hand over Lebanon’s oil and gas resources to the “resistance”. The Hezbollah chief’s objective is to secure the resources that it would then use to rebuild Lebanon in its own image – not unlike the way Rafik Hariri’s recovery programme was able to shape Lebanon in the late prime minister’s image during the post-civil war years in the 1990s.

Amid all this escalating rhetoric, what is worrying is that the inability to revive the Vienna talks might necessitate a war in which either Israel persuades the US to prevent Iran from acquiring nuclear weapons. Alternatively, Tehran might lure Israel into a war if it concludes that there will be no lifting of US-led sanctions – and that the time has come to retaliate against Israel for its alleged attacks inside Iran.

Can the talks be revived? It depends on whether Tehran holds on to its demand that the IRGC be delisted, because keeping it on the US terror list means that it won’t be able to use its yet-frozen funds as it pleases. While the Iranian demand may sound reasonable to some, it is impossible to be met given the IRGC’s subversive role in the region. US President Joe Biden will also be cognisant of the fact that a resurgent Republican Party will use any move on the part of his administration to do so against it in November’s midterm election.

The failure of the Vienna talks, and the continuation of sanctions, are likely to prompt the IRGC to escalate tensions on multiple fronts using multiple methods, from proxy wars and direct, albeit limited, military operations against Israel, to dealing in contraband. The continuation of sanctions at a time of an Iranian economic downturn and rising popular anger is, in Tehran’s view, tantamount to the West’s decision to pursue regime change.

For now, any talk of regime change, or the regime’s change in behaviour, is premature. What is clear is that the nuclear issue constitutes a prolonged crisis. Wars will be costly. And fundamental shifts in the geopolitical map will force many entities to reconsider their calculations, partnerships and expectations.

The question Hezbollah and the IRGC should asking themselves is whether they believe a war with Israel will serve their interests. Or are they beating the proverbial drums of war merely as part of a realignment in case deals with the West succeed – or fail?

Whatever be the case, they must know that a divided UN Security Council will be unable to stop such a war – and that an open-ended conflict will not benefit anyone.