About three weeks ago, Bassem Al Sheikh Hussein  gained the admiration of many in Lebanon when he held up a bank branch in Beirut, demanding access to his trapped savings so he could pay for his father’s medical treatment.

On Tuesday, he returned to the spotlight again — this time unarmed — as he joined a protest outside the Lebanese parliament against a draft capital controls law that was being discussed by MPs inside.

“I’m here to stand by the people who stood by me when I was in jail,Mr Al Sheikh Hussein told The news .

Banks initially stopped allowing depositors to withdraw in dollars   but have since relaxed the measure, allowing dollar withdrawals in tightly restricted quantities, with the rest distributed in vastly devalued Lebanese pounds.

The capital controls law, a prerequisite for Lebanon to gain access to billions of dollars from the International Monetary Fund, would formalise the current limits that are currently in place.

Critics say the law would unfairly penalise depositors and protect Lebanon’s ruling class, which has been blamed for the country’s devastating economic crisis.

With many across the country frustrated over their inability to gain full access to the money in their bank accounts, Mr Al Sheikh Hussein decided to take matters into his own hands when he took hostages at the Hamra branch of the Federal Bank.

The roughly seven-hour stand-off three weeks ago ended peacefully when he agreed to a settlement that would allow him to withdraw about $35,000 of his $210,000 in trapped savings. He was detained after the incident but was released days later without charge.

Some in Lebanon were sympathetic to his cause, with demonstrations organised demanding his release.

“I want all the people to get their rights, but this is far away,” Mr Al Sheikh Hussein said.

Referring to the actions he took to retrieve some of his money, Mr Al Sheikh Hussein said he expected “many people” in Lebanon could do something similar.

At the protest on Tuesday, as riot police and the Lebanese Army looked on, a handful of MPs opposed to the proposed capital control law joined the few dozen demonstrators. Some of the protesters banged on the doors of nearby banks and blocked the road in front of parliament.

One banner held by the group read: “The Lebanese parliament is a means to legislate corruption.”

Small-scale demonstrations against the situation in Lebanon are commonplace but reflect the anger the population feels over the country’s ruling classes.

An economic collapse  that first became apparent in 2019 has plunged much of the nation into poverty and caused the local currency to tumble in value by more than 90 per cent.

Inflation is rampant and there are widespread shortages of water, bread, electricity, medicine and other basic essentials.

In January, coffee shop owner Abdallah Assaii held up a branch of Lebanese bank BBAC in the Bekaa Valley.

He held seven employees hostage until he received $50,000 of his own money. He then surrendered to police. 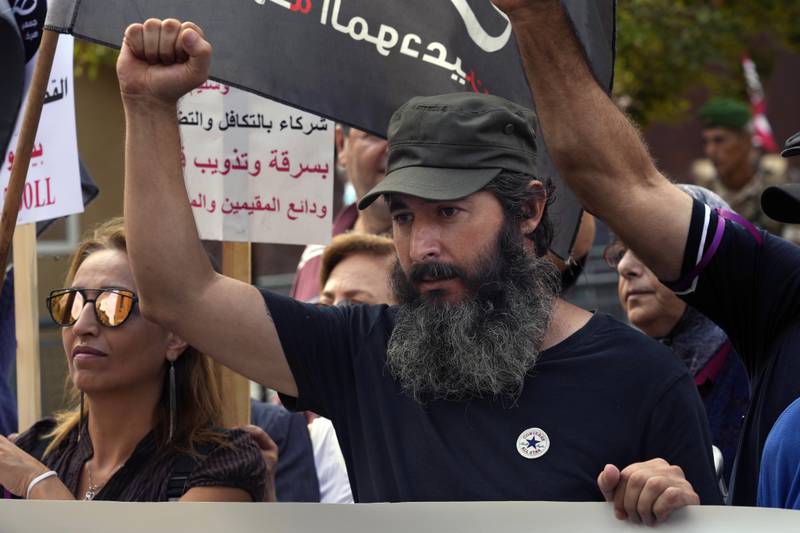