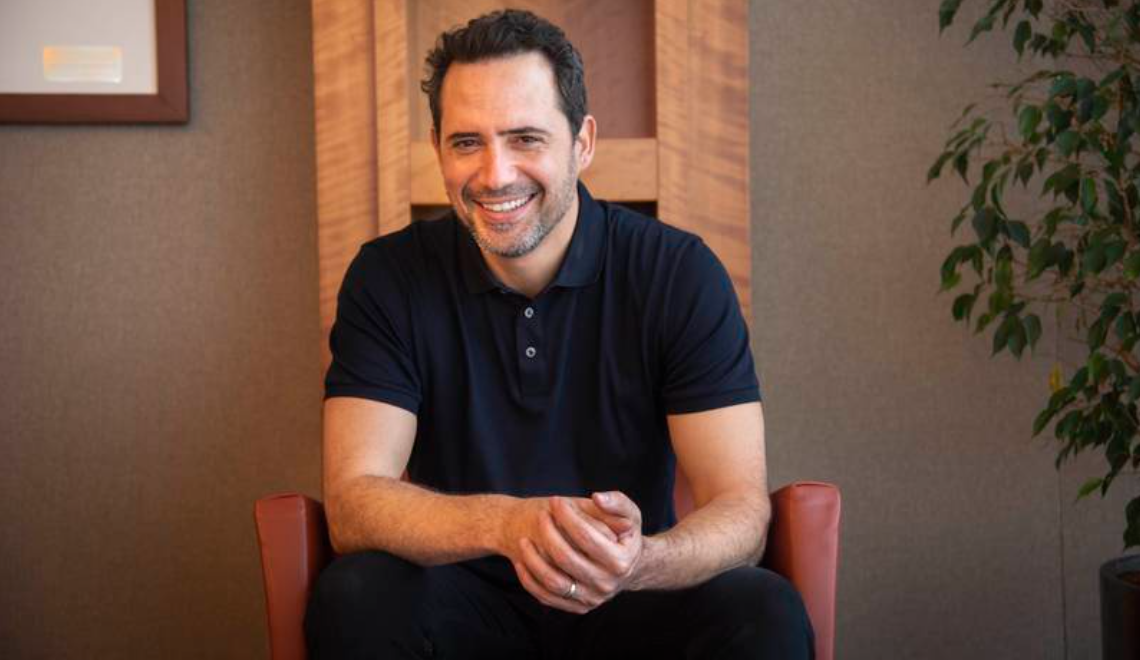 If you plan to watch the acclaimed film Ghodwa at the weekend in Dubai, scan the lobby on your way out. There, you may find the film’s star and director Dhafer L’Abidine, 49, emerging from the shadows to gauge your opinion.

This has become the Tunisian’s favourite habit when travelling across the Arab world, from Egypt to the UAE, to promote his directorial debut.

“I am not shy of going up and asking people what they think,” he tells The National. “I do privately attend the film screenings just to watch how people engage with the film.

“We worked so hard on it and to see people really investing in the story has made the journey worthwhile.

One of which is to tell a simple and engaging story amid the complex backdrop of the 2011 Arab uprisings.

Set in a modern-day Tunis still reeling from the aftershocks of the Jasmine Revolution, Ghodwa (loosely translated to mean “tomorrow” or “hope”, follows the reunion and subsequent relationship between Habib (L’Abidine) and his son Ahmed, 15, played by Ahmed Berrhouma.

With Habib suffering from a deteriorating health condition and his political past coming back to haunt him, Ahmed becomes his protector as they both attempt to eke out a low-key existence amid a struggling society.

While he did not want to create a film directly dealing with the revolution and the wider Arab uprisings, L’Abidine says it would be dishonest for Ghodwa not to acknowledge what happened.

“It is a story about a father and son and that relationship begins at home and from there you have the social, economic and political environments that affect them,” he says.

“The film tries to show how this little relationship is related to so many bigger things that are happening and maybe it can tell you something about what is going on in the Arab world.”

Through the pensive relationship between Habib and Ahmed, Ghodwa also speaks of some universal truths.

“It looks at how values are passed from one generation to the other,” L’Abidine says. “When you are a father, you are thinking about your son and when you are a son, you are always reacting to your father. The question is, then, how do we all go forward and build a better tomorrow?

“Everybody goes through that no matter where you are from.”

A change of scene

Born in Tunis, he turned to acting after a promising football career was marred by injury.

After graduating from the Birmingham School of Acting (now Royal Birmingham Conservatoire) in the UK, L’Abidine went on to pick up small and notable roles in British television dramas Spooks and The Bill as well blink-and-you-miss-it appearances in US films The Da Vinci Code in 2006 and 2010’s Sex and the City 2.

While L’Abidine relishes the prospect of western audiences seeing him as the lead in Ghodwa, it is the reaction from Arab audiences that could prove equally exciting.

Ever since his well-received role in the 2013 Egyptian Ramadan drama Niran Sadiqa, L’Abidine turned his attention to the region and quickly rose to become one of the Arab world’s most popular actors.

Tall, broad-shouldered and with an almost permanently weary facial expression, L’Abidine built a career as an enigmatic and complicated leading man. That approach is best crystallised in his role as Fares, the scion of an influential Lebanese family in the ongoing third season of the MBC drama Arous Beirut (Bride of Beirut).

L’Abidine admits the decision to write and shoot Ghodwa in an atmospheric and elegiac style was partly a reaction to the fast-paced approach of Arous Beirut.

“When you are doing a film, you do have more space in the way you can tell the story and the visuals become just as important as the dialogue,” he says. “With soap operas, it is very heavily dialogue-based and it relies a lot on people hearing the tension in the room, as opposed to only seeing it. This is why (variations) of the same scene can be repeated five or six times in episodes.”

While the repetition may sound non-stimulating, L’Abidine says he was fully engaged in what is his first ever Lebanese character.

“I have been used to playing Egyptians throughout my career, so I had to get out of my comfort zone,” he says. “Not only did I have to learn the Lebanese dialect but also the little mannerisms and quirks that are uniquely Lebanese, such as the way they roll their eyes, for example. It was all about paying attention.”

Pan-Arab productions are the future

The long-running success of Arous Beirut, based on the Turkish series Istanbullu Gelin (Bride of Istanbul) not only proved there is an appetite for new television content outside the traditional Ramadan season, but the Lebanese drama has the potential of becoming just as popular as its Egyptian counterpart, with Middle East and North African viewers.

“There are great stories to tell from Lebanon because it has a very open culture and society, yet at the same time there is that conservative element that is part of society,” he says.

“From the nature and spirit of the people to the visual elements like the cities and mountains, there is much that can be done, provided there is the right cast and production values.”

This formula is not limited to Lebanese shows, L’Abidine says, but for all Arabic content to resonate within the region and beyond.

“The future is more pan-Arab productions and I feel that Arous Beirut is an example of that. Although it is shot and based in Lebanon, it has Syrian actors and myself, a Tunisian, also involved,” he says. “In the West, you have Australians and British people going to the US and vice versa and they create productions together that become global.

‘Ghodwa’ is out now in the UAE. ‘Arous Beirut’ can be streamed on Shahid and is also shown on MBC.

The fall weather that everyone has been hoping for arrives Monday in Northeast Ohio and will hang around for the first part of the week. Forecasters with the National Weather Service say the region should get plenty of sunshine Monday, with highs in the low 60s. The...